Ahead of the public launch of Apple’s revamped suite of first-party apps on iOS 13, the company has rolled out a new version of its popular video editor, iMovie for iOS. With the app’s most recent update, iMovie has received a host of new features — most notably, support for a green-screen effect that lets you remove the background from clips, as well as the addition of 80 new soundtracks across a variety of genres.

The green-screen support, in particular, could make iMovie a better competitor to the third-party video editors that tend to offer more advanced feature sets, while also keeping things simple for less-savvy users.

Apple says users of the new version (2.2.7) will be able to remove backgrounds from any clips shot in front of a blue or green screen, as well as adjust the clip with a four-point mask and strength slider. 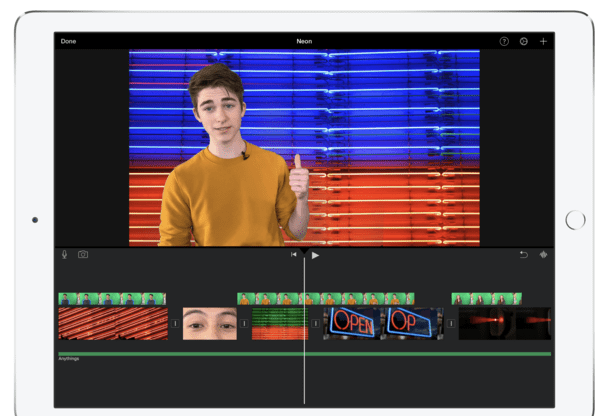 Its 80 new soundtracks include genres like pop, chill and sentimental that will automatically adjust to the length of the movie.

In terms of new effects, iMovie will now allow users to add photos as overlays to create picture-in-picture and split-screen effects, as well as opt to hide the border on those. These were some of iMovie’s more requested features, in fact, and one of the reasons people went elsewhere for video-editing apps.

Other new features are designed to make iMovie easier to use. For example, when you switch back to the iOS app from other applications, it will take you right to the edit screen of your project. It has also tucked away access to iMovie Theater from the three-dot ( … ) more menu, as it’s shifting users to share videos to iCloud instead.

And, as part of other classroom-focused updates, iMovie now supports ClassKit, which means students can deliver their video assignments directly the teachers via Apple’s Schoolwork app.

Because iMovie is designed to work across Apple’s platforms, users can begin editing projects on their phone, then transfer them to other devices like the iPad or Mac in order to complete edits, including those that may benefit from working via a larger screen — such as the green-screen effect or color corrections, for example.

The updated iMovie is available for both iPhone and iPad from the App Store.