The rising popularity of omni-channel commerce — selling to customers wherever they happen to be spending time online — has spawned an army of shopping tools and platforms that are giving legacy retail websites and marketplaces a run for their money. Now, one of the faster growing of these is announcing an impressive round of funding to stay on trend and continue building its business.

Depop, a London startup that has built an app for individuals to post and sell (and mainly resell) items to groups of followers by way of its own and third-party social feeds, has closed a Series C round of $62 million led by General Atlantic. Previous investors HV Holtzbrinck Ventures, Balderton Capital, Creandum, Octopus Ventures, TempoCap and Sebastian Siemiatkowski, founder and CEO of Swedish payments company Klarna, all also participated.

The funding will be used in a couple of areas. First, to continue building out the startup’s technology — building in more recommendation and image detection algorithms is one focus.

And second, to expand in the U.S., which CEO Maria Raga said is on its way to being Depop’s biggest market, with 5 million users currently and projections of that going to 15 million in the next three years.

That’s despite strong competition from other peer-to-peer selling platforms like Vinted and Poshmark, and social platforms that have been doubling down on commerce, like Instagram and Pinterest. On the other hand, the opportunity is big: A recent report from ThredUp, another second-hand clothes sales platform, estimated that the total resale market is expected to more than double in value to $51 billion from $24 billion in the next five years, accounting for 10% of the retail market.

Prior to this, Depop had raised just under $40 million. It’s not disclosing its valuation except to say it’s a definite up round. “I’m extremely happy,” Raga said when I asked her about it this week.

The rise of the bedroom entrepreneur

The funding comes on the heels of strong growth and strong focus for the startup.

If “social shopping,” “selling to groups of followers,” and the “use of social feeds” (or my headline…) didn’t already give it away, Depop is primarily aimed at millennial and Gen Z consumers. The company said that about 90% of its active users are under the age of 26, and in its home market of the U.K. it’s seen huge traction, with one-third of all 16 to 24-year-olds registered on Depop.

“The fashion world hasn’t really taken notice” of how things have evolved at the consumer end, she continued, citing concerns with sustainability (and specifically the waste in the fashion industry), how trends are set today (no longer dictated by brands but by individuals) and how anything can be sold by anyone, from anywhere, not just from a store in the mall, or by way of a well-known brand name website. “You can now start a fashion business from your bedroom,” she added.

For this generation of bedroom entrepreneurs, social apps are not a choice, but simply the basis and source of all their online engagement. Depop notes that the average daily user opens the app “several times per day” both to browse things, check up on those that they follow, to message contacts and comment on items and, of course, to buy and sell. On average, Depop users collectively follow and message each other 85 million times each month.

This rapid uptake and strong usage of the service has driven it to 13 million users, revenue growth of 100% year-on-year for the past few years and gross merchandise value of more than $500 million since launch. (Depop takes a 10% cut, which would work out to total revenues of about $50 million for the period.) 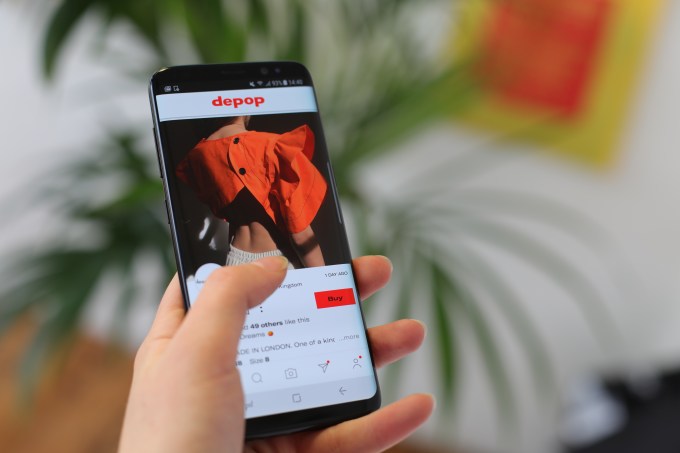 When we first wrote about Depop back in 2015 (and even prior to that), the startup and app were primarily aiming to provide a way for users to quickly snap pictures of their own clothes and other used items to post them for sale, one of a wave of flea-market-inspired apps that were emerging at that time. (It also had an older age group of users, extending into the mid-thirties.)

Fast-forward a few years and Depop’s growth has been boosted by an altogether different trend: the emergence of people who go to great efforts to buy limited editions of collectable, or just currently very hot, items, and then resell them to other enthusiasts. The products might be lightly used, but more commonly never used, and might include limited-edition sneakers, expensive t-shirts released in “drops” by brands themselves or items from one-off capsule collections.

It may have started as a way of decluttering by shifting unused items of your own, but it’s become a more serious endeavor for some. Raga notes that Depop’s top sellers are known to clear $100,000 annually. “It’s a real business for them,” she said.

And Depop still sells other kinds of goods, too. These pressed-flower phone cases, for example, have seen a huge amount of traction on Twitter, as well as in the app itself in the last week:

Ordered a new phone case off this woman from depop who makes them with pressed flowers n she sent me this :’) pic.twitter.com/oBtRtQ1MJc

Alongside its own app and content shared from there to other social platforms, Depop extends the omnichannel approach with a selection of physical stores, too, to showcase selected items.

The startup has up to now taken a very light-touch approach to the many complexities that can come with running an e-commerce business — a luxury that’s come to it partly because its sellers and buyers are all individuals, mostly younger individuals and, leaning on the social aspect, the expectation that people will generally self-police and do right by each other, or risk getting publicly called out and lose business as a result.

I think that as it continues to grow, some of that informality might need to shift, or at least be complemented with more structure.

In the area of shipping, buyers generally do not seem to expect the same kind of shipping tracking or delivery professionals appearing at their doors. Sellers handle all the shipping themselves, which sometimes means that if the buyer and seller are in the same city, an in-person delivery of an item is not completely unheard of. Raga notes that in the U.S. the company has now at least introduced pre-paid envelopes to help with returns (not so in the U.K.).

Payments come by way of PayPal, with no other alternatives at the moment. Depop’s 10% cut on transactions is in addition to PayPal’s fees. But having the Klarna founder as a backer could pave the way for other payment methods coming soon.

One area where Depop is trying to get more focused is in how its activities line up with state laws and regulations.

For example, it currently already proactively looks for and takes down posts offering counterfeit or other illicit goods on the platform, but also relies on people or brands reporting these. (Part of the tech investment into image detection will be to help improve the more automated algorithms, to speed up the rate at which illicit items are removed.)

Then there is the issue of tax. If top sellers are clearing $100,000 annually, there are taxes that will need to be paid. Raga said that right now this is handed off to sellers to manage themselves. Depop does send alerts to sellers, but it’s still up to the sellers themselves to organise sales tax and other fees of that kind.

“We are very close to our top sellers,” Raga said. “We’re in contact on a daily basis and we inform of what they have to do. But if they don’t, it’s their responsibility.”

While there is a lot more development to come, the core of the product, the approach Depop is taking and its success so far have been the winning combination to bring on this investment.

“Technology continues to transform the retail landscape around the world and we are incredibly excited to be investing in Depop as it looks to capture the huge opportunity ahead of it,” said Melis Kahya, General Atlantic head of Consumer for EMEA, in a statement. “In a short space of time the team has developed a truly differentiated platform and globally relevant offering for the next generation of fashion entrepreneurs and consumers. The organic growth generated in recent years is a testament to the impact they are having and we look forward to working with the team to further accelerate the business.”