After announcing a year-long pilot of pop-up shops in the UK earlier this week to sell items from smaller marketplace merchants, Amazon has added another development to its brick-and-mortar efforts in the country. Starting today, the company is setting up physical kiosks, initially in train stations, to sell passers-by a rotating range of items at discounted prices.

The first of these will be in London, where Amazon is situating them in rail stations — Charing Cross, King’s Cross, Paddington, Liverpool Street and my local station London Bridge — and will start off by selling Boodles Mulberry Gin for £14.99 a bottle (a 40% discount on the normal price, Amazon notes). 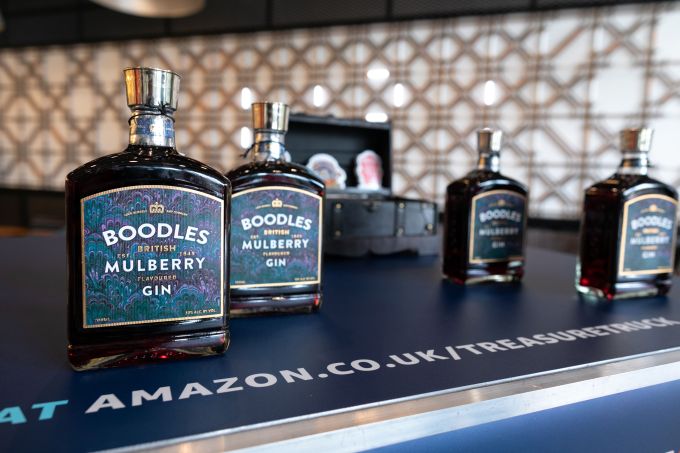 The kiosks, Amazon says, are an extension of the company’s Treasure Truck concept, which sees a large vehicle doing the rounds across various towns — currently London, Manchester, Liverpool, Sheffield, Leeds, York, Birmingham, Coventry, Portsmouth, Southampton, Nottingham, Leicester, Windsor, Maidenhead, Reading and Slough (for US readers: the original site of The Office) — offering a rotating selection of items at discounted prices. These have been operating in the UK for a couple of years now.

With Treasure Truck in the UK, you sign up for the service (by texting “truck” to 87377) and Amazon texts you to let you know when the truck is coming your way. Users can pre-order and pay for items to collect them from the truck. It looks like the same format will apply to the kiosks, which will also become pick-up points. To incentivise more signups, Amazon said that new users will get an additional introductory discount of £5 per bottle.

Kiosks are a practical adaptation of the Treasure Truck concept for Amazon: as with other cities in Europe, the locations Amazon visits in the UK have narrow streets sometimes clogged with traffic and generally not designed for speedy arrivals of giant vehicles, and the population is more dense.

Also, situating kiosks in rail stations to catch people during their commutes means more may buy knowing they are on their way home or to an office so will not have to carry items around all day.

“Kiosks are a natural extension of the exciting shopping experience of Amazon’s Treasure Truck. Whether you’re on the way to work or heading home for the day, Amazon customers and passersby will have a fun and convenient way to shop for an amazing deal, get their hands on a trending product or take part in a fun event. Kiosks will help turn an ordinary day into something a bit more special,” said Suruchi Saxena Bansal, Country Leader, Amazon Treasure Truck, in a statement.

More generally, Amazon has been slowly increasing the different channels that it uses to connect with potential customers beyond its basic website and mobile app.

This is because “omnichannel” is the order of the day in commerce: in markets that are especially competitive and mature, we’ve seen a big shift among retailers to cater to a wider variety of audiences and sell to them in whichever channel where they are spending time and discovering things.

That’s included selling on social media (Instagram for one is making a big push with this), through email (see: Mailchimp’s efforts here), and of course doing things the old-fashioned way, by selling in person (something that efforts from the likes of Square and PayPal have also helped to grow).

That in-person experience is something that Amazon — born in the virtual world of cyberspace — has been doubling down on for years to reach a wider set of shoppers.

Its efforts have included bookstores near college campuses, cashier-free Amazon Go stores, the whopping acquisition of Whole Foods, and — as of earlier this week — setting up pop-up shops.

The latter are particularly ironic, given that the Amazon name is regularly invoked when people discuss how brick-and-mortar shops — and in the UK, “high street” shopping precincts — have died a death.

A year ago, there was a rumor that Amazon was negotiating in the UK to acquire a selection of large retail locations that were being vacated by the bankrupt hardware and DIY chain Homebase.

These sprawling locations, situated often in town outskirts among other large stores with huge parking lots, are a far cry from little kiosks in crowded train stations. And indeed, the Homebase deal, if it was every really on the cards, never came to pass.

But the report and Amazon’s wider track record are sure signs that the commerce is only going to get more physical, not less. It’s not a question of “if”, but rather of how and when.