Meet Majelan, a French startup that wants to make podcasts more accessible. Behind the scene, Majelan is the startup created by former Radio France CEO Mathieu Gallet and Arthur Perticoz. The app is launching today on iOS and Android in the coming days.

Given that Gallet was previously at the head of all French public radios, the company has already raised $4.5 million from Idinvest Partners, Jacques Veyrat, Kima Ventures, Fabrice Larue and others.

At a press conference, Gallet said that Majelan isn’t the Netflix of podcasts. “It’s an experience that is 99.99% free. We are a content aggregator, an RSS feed aggregator,” he said.

But it doesn’t mean that the company hasn’t been inspired by Netflix, Spotify, Molotov and other streaming platforms. So let’s unpack what all of this means. 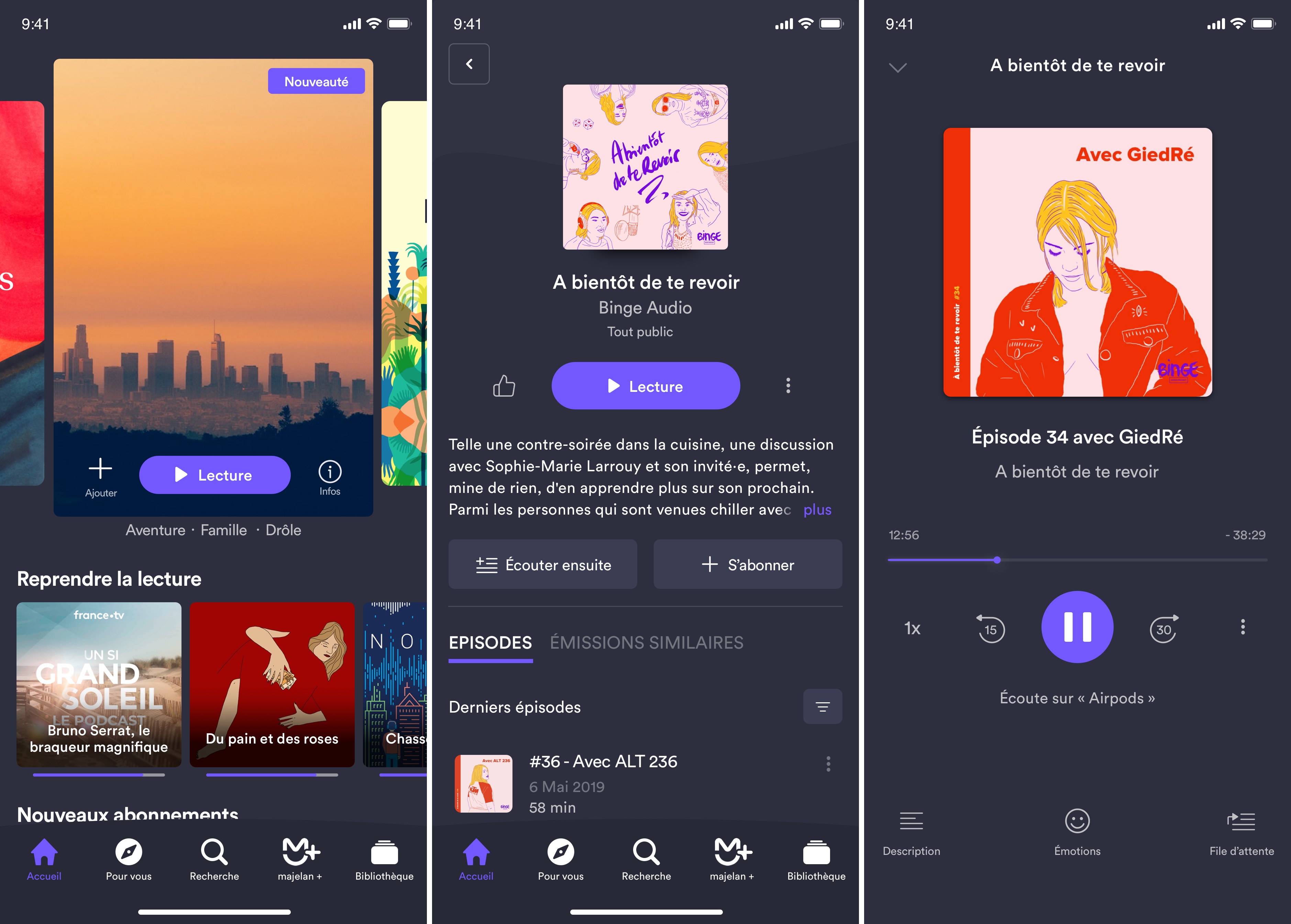 Podcasts are an interesting content format. If you listen to the same host for a while, it feels like you know them and they’ve become your friends. But many podcast players provide a dry experience that feels more like using Google News than interacting with people you listen to.

Majelan gets the basic rights when it comes to podcast players. Pretty much like the Apple Podcasts app, you can search for podcasts, download and listen to episodes. If you like what you’re hearing, you can subscribe to a podcast and get new episodes when they’re released. It’s a true podcast player as you can even paste a podcast URL to add any podcast you want.

But Majelan thinks Apple Podcasts and the iTunes podcast directory are reminiscent of a phone book — Apple Podcasts is by far the leading podcasting app right now. It’s hard to find content and you don’t get any customized recommendations.

In other words, you probably know someone who wants to get into podcasts but doesn’t know where to start.

“The homepage is completely editorialized by the Majelan teams — they create topic-based playlists. They have listened to hours and hours of content and we already have 50 playlists,” Gallet said.

Each playlist is a collection of podcast episodes based on a specific subject — for instance the S01E01 playlist is all about TV series. Some playlists are based on a mood, such as “tropical shower”. The editorial team will regularly update playlists, phase out some of them and add new ones. It works like Spotify playlists made by the Spotify team.

On the search page, Majelan is using a grid view of buttons so that you can find podcasts on your favorite subjects (cooking, soccer, crime stories, philosophy, romance, etc.).

The Majelan team has met with the French TV and radio archive institue INA to learn how to tag a giant library of content. They are now manually tagging thousands of podcasts with hundreds of tags so that you can find the perfect podcast for your.

After you listen to podcasts for a while, you’ll find personalized recommendations in a tab called “For You”. This is an algorithm-driven tab that will soon tell you why Majelan thinks you’ll like a particular podcast. 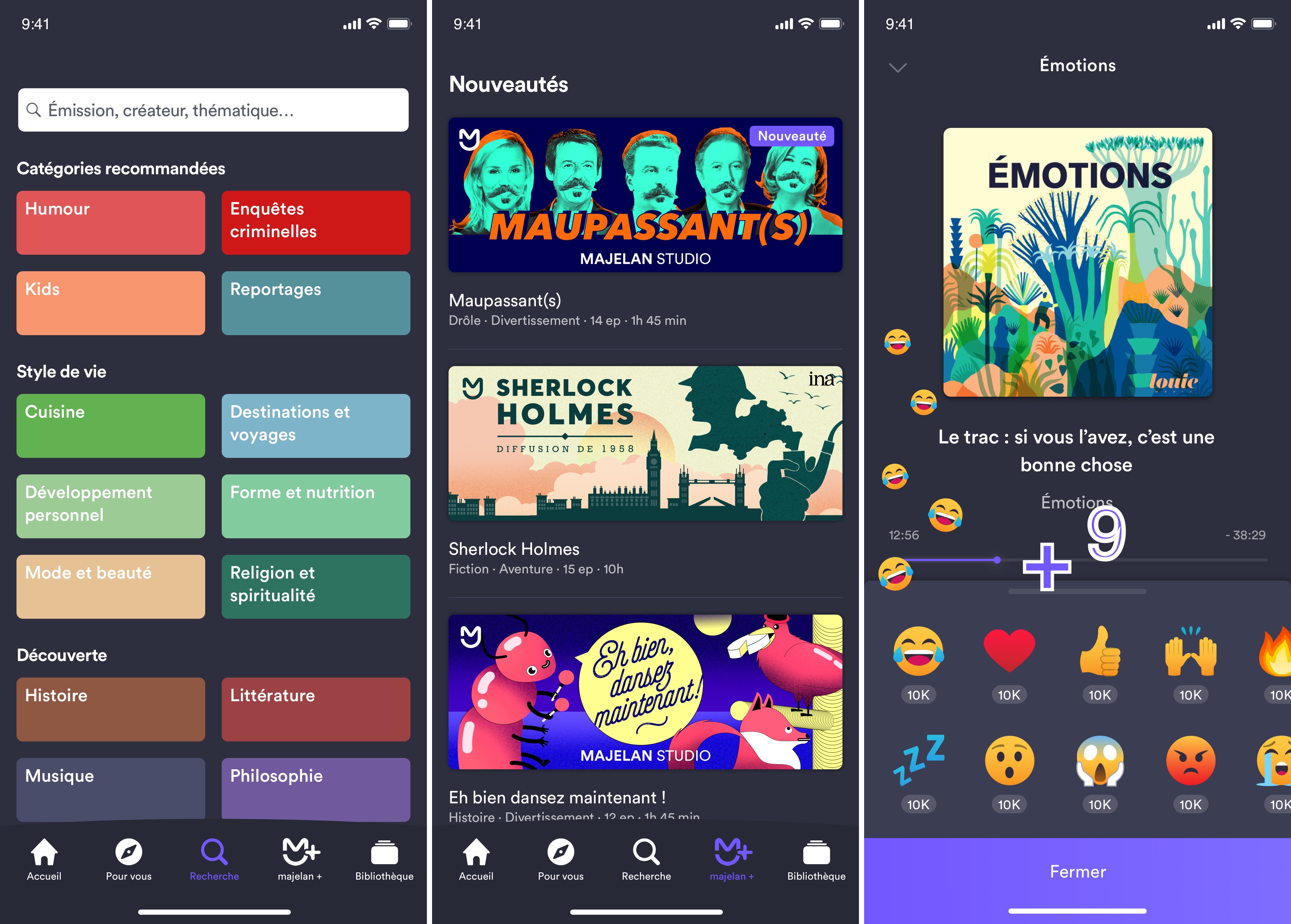 Majelan’s business model is as interesting as the app itself. The company doesn’t show you any banner ad and doesn’t insert audio ads. Instead, you can subscribe to Majelan+ for €4.99 per month, or €1.99 per podcast ($5.57 and $2.22 respectively) — companies can sponsor curated playlists though.

Subscribers don’t get any premium feature, but they can access Majelan+ content. The company doesn’t mix premium content with free content for now. You have to head over to the Majelan+ tab to see premium content and listen to teasers and episodes.

Launch partners include INA, Universal Music, Society, Sara Yalda’s conferences and Clique.TV interviews. When it comes to in-house content, there are podcasts for kids, teens and adults.

It’s all about data

By controlling the player, Majelan is collecting a ton of data about podcasts. For instance, the startup knows when people usually stop listening to a podcast. They can spot some trends and adjust their premium content based on what users want.

On each episode, you can react with various emojis, such as a heart, a thumbs up, a fire emoji, etc. Majelan plans to let podcast creators access this data in the Majelan back end. The company doesn’t want to monetize this data itself.

And this is the challenge with all podcast startups. Apple has been a neutral actor and its podcast directory has been open to anyone. For instance, you can create a podcast player and leverage Apple’s podcast directory for free. But many creators in the podcast community don’t want to see a well-funded private actor ruin everything.

So far, Majelan has had a cautious approach. Sure, you won’t be able to access Majelan+ content from another podcast player. But Majelan isn’t alienating the podcast ecosystem by monetizing free podcasts with audio ads for instance. It’s a fine line, so let’s see if the startup can keep the right balance over time.