Ditch those generic emoji. Facebook’s new Avatars feature lets you customize a virtual lookalike of yourself for use as stickers in chat and comments. Once you personalize your Avatar’s face, hair, and clothes, they’ll star in a range of frequently updated stickers conveying common emotions and phrases. From Likes to Reactions to Avatars, you could see this as the natural progression of self-expression on Facebook…or as a ruthless clone of Snapchat’s wildly popular Bitmoji selfie stickers.

Facebook Avatars launches today in Australia for use in Messenger and News Feed comments before coming to the rest of the world in late 2019 or early 2020. The feature could make Facebook feel more fun, youthful, and visually communicative at a time when the 15-year-old social network increasingly seems drab and uncool. Avatars aren’t quite as cute or hip to modern slang as Bitmoji. But they could still become a popular way to add some flare to replies without resorting to cookie-cutter emoticons or cliche GIFs. 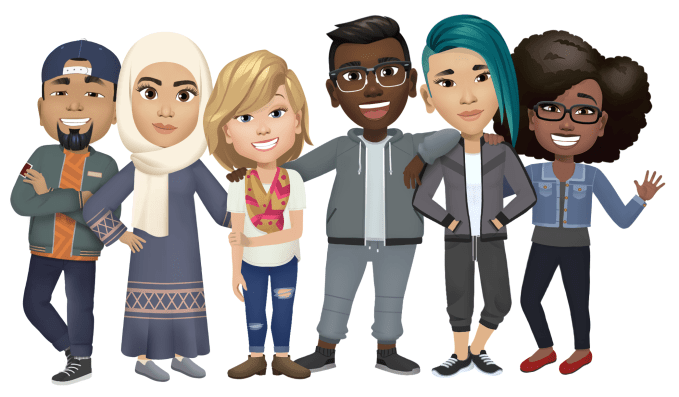 “There’s been a ton of work put in to this from the product and design perspective to find out, with how many people on Facebook, how to make this as representative as possible” says Facebook Avatars communication manager Jimmy Raimo. From offering religious clothing like hijabs to a rainbow of skin colors and hair styles, Facebook didn’t want any demographic left out. “They’re a bit more realistic so they can be your personal avatar vs trying to make them cute, funny, and cartoony” Raimo explains.

Users will start to see a smiley-face button in the News Feed comment composer and Messenger sticker chooser they can tap to create their Facebook Avatar. For now, only people in Australia can make Avatars but everyone will be able to see them around Facebook. 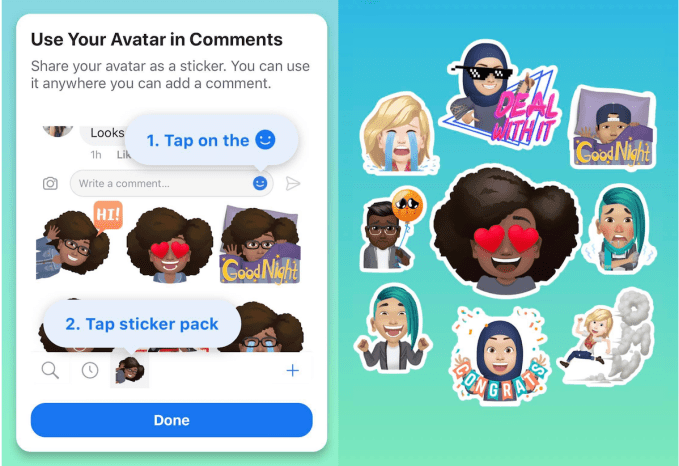 The creation process begins with gender neutral blank people can customize from scratch across 18 traits. For now there’s no option to start with a selfie or profile pic and have Facebook automatically generate you an avatar. Facebook is researching that technique, but Raimo acknowledges that “We want to make sure we don’t show you something totally opposite of the photo. There’s sensitivity around facial recognition.”

Facebook won’t be monetizing Avatars directly, at least at first. There are no sponsored clothing options from fashion brands or ways to buy fancy jewelry or other accessories for your mini-me. Raimo said Facebook is open to these idea, though. “It would help personalize it for sure and from a business perspective that would be smart.” It’s easy to imagine Nike or The North Face paying to let Avatar sport their logos, or fans coughing up cash to wear their favorite labels. Perhaps that’s a micropayment use case for Facebook’s upcoming cryptocurrency.

Facebook is also considering expanding Avatars for use as profile pics or in Groups — two areas of the app where you interact with strangers and you might enjoy the anonymity of a 2D drawing instead of a photo of your face. However, Facebook hasn’t deeply considered turning Avatars into a platform so you could use them in other apps through an API or keyboard you install on your phone.

Instead, step 1 was just to make sure the Avatar creation flow is easy and most people can make one that actually looks like them. The News Feed team that built Avatars plans to conduct surveys and focus groups to help it iterate. When asked about the ability to change the perceived age of Avatars to be inclusive of Facebook’s older users, Raimo admitted that’s a gap in the product that it plans to fill by year’s end. Currently there’s no way to add wrinkles so mom and dad’s avatars might look a bit too similar to yours.

The biggest problem with Facebook Avatars is that they’re hopelessly late to the market. TechCrunch broke the news that Facebook was working on Avatars a year ago, and that was already a year after I wrote that “Facebook seriously needs its own Bitmoji“. While it’s good that it took the time to research how to make them inclusive, Snapchat gained a ton of ground in the meantime. Other competitors have cropped up like FaceMoji‘s hyper-realistic animated masks, charicature-style Genies, and Morphin which deepfakes you into popular GIFs.

Bitmoji has been around since 2014, and since Snapchat acquired it in 2016, it’s been a mainstay of the top 10 apps chart. Sensor Tower estimates Bitmoji has been downloaded over 330 million times. And Bitmoji now has its own developer kit that spawning hit social apps like YOLO, games where your character looks like you, and even merchandise and smart watch faces.  Like Snapchat Stories, Bitmoji may be too entrenched in popular culture for Facebook Avatars to ever escape their rap as a rip-off.

“We’re by no means the first ones here” concedes Facebook News Feed product lead Amit Fulay. Yet that doesn’t mean there isn’t a huge opportunity here.”The notion of having digital representation has been around for a really long time. What we’re trying to do is this at scale.” As was its stance on copying Snapchat Stories, Raimo says that Facebook cares more about building what the most people will use and enjoy than getting credit for inventing something.

The need for humans to expressively represent themselves on the internet is only growing as we shift from text-based to image-based communication. There are still billions of Facebook users without a Bitmoji. Whether for privacy, creativity, or convenience, there’s a wide range of use cases for having a parallel virtual likeness. It could protect our real face from needless exposure to the rougher sides of the web. And now Mark Zuckerberg has the foundation of a digital identity layer that could travel with us alongside our data, personalizing every online interaction.