Hidden inside the code of Facebook’s Android app is an unreleased feature called Facebook Avatars that lets people build personalized, illustrated versions of themselves for use as stickers in Messenger and comments. It will let users customize their avatar to depict their skin color, hair style and facial features. Facebook Avatars is essentially Facebook’s version of Snapchat’s acquisition, Bitmoji, which has spent years in the top-10 apps chart.

[Update 6/3/2019: Facebook has now officially launched its Avatars product, first in Australia, and it looks a lot better now.]

Back in October I wrote that “Facebook seriously needs its own Bitmoji,” and it seems the company agrees. Facebook has become the identity layer for the internet, allowing you to bring your personal info and social graph to other services. But as the world moves toward visual communication, a name or static profile pic aren’t enough to represent us and our breadth of emotions. Avatars hold the answer, as they can be contorted to convey our reactions to all sorts of different situations when we’re too busy or camera-shy to take a photo. 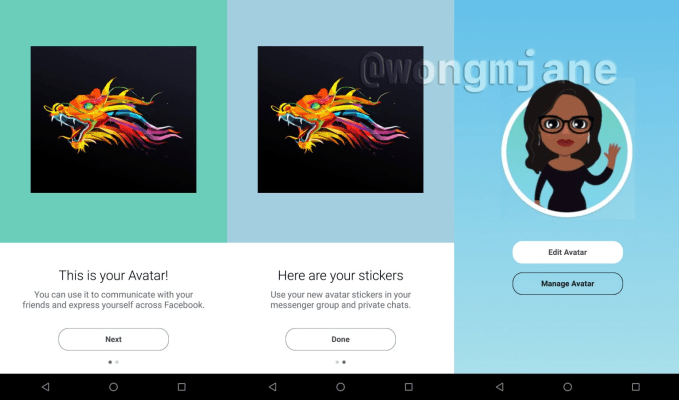 The screenhots come courtesy of eagle-eyed developer Jane Manchun Wong, who found the Avatars in the Facebook for Android application package — a set of files that often contain features that are unreleased or in testing. Her digging also contributed to TechCrunch’s reports about Instagram’s music stickers and Twitter’s unlaunched encrypted DMs.

Facebook confirmed it’s building Avatars, telling me, “We’re looking into more ways to help people express themselves on Facebook.” However, the feature is still early in development and Facebook isn’t sure when it will start publicly testing.

In the onboarding flow for the feature, Facebook explains that “Your Facebook Avatar is a whole new way to express yourself on Facebook. Leave expressive comments with personalized stickers. Use your new avatar stickers in your Messenger group and private chats.” The Avatars should look like the images on the far right of these screenshot tests. You can imagine Facebook creating an updating reel of stickers showing your avatar in happy, sad, confused, angry, bored or excited scenes to fit your mood.

Currently it’s unclear whether you’ll have to configure your Avatar from a blank starter face, or whether Facebook will use machine vision and artificial intelligence to create one based on your photos. The latter is how the Facebook Spaces VR avatars (previewed in April 2017) are automatically generated. 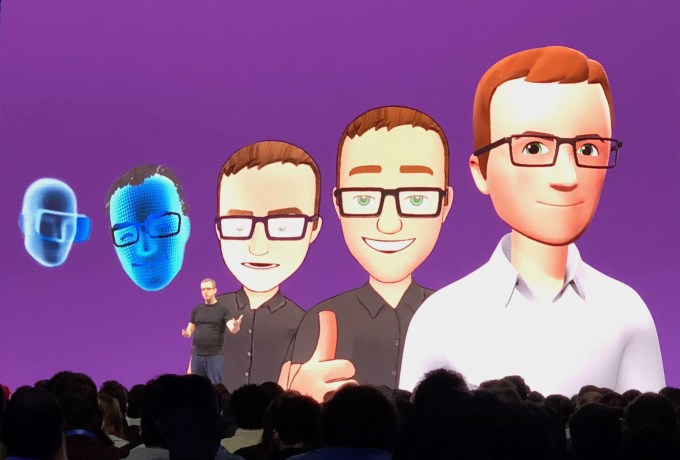 Facebook shows off its 3D VR avatars at F8 2018. The new Facebook Avatars are 2D and can be used in messaging and comments.

Using AI to start with a decent lookalike of you could entice users to try Avatars and streamline the creation process so you just have to make small corrections. However, the AI could creep people out, make people angry if it misrepresents them or generate monstrous visages no one wants to see. Given Facebook’s recent privacy scandals, I’d imagine it would play it conservatively with Avatars and just ask users to build them from scratch. If Avatars grow popular and people are eager to use them, it could always introduce auto-generation from your photos later.

Facebook has spent at least three years trying to figure out avatars for VR. What started as generic blue heads evolved to take on basic human characteristics, real skin tones and more accurate facial features, and are now getting quite lifelike. You can see that progression up top. Last week at F8, Facebook revealed that it’s developing a way to use facial tracking sensors to map real-time expressions onto a photo-realistic avatar of a user so they can look like themselves inside VR, but without the headset on.

But as long as Facebook’s Avatars are trapped in VR, they’re missing most of their potential.

Bitmoji’s parent company Bitstrips launched in 2008, and while its comic strip creator was cool, it was the personalized emoji avatar feature that was most exciting. Snapchat acquired Bitstrips for a mere $64.2 million in early 2016, but once it integrated Bitmoji into its chat feature as stickers, the app took off. It’s often risen higher than Snapchat itself, and even Facebook’s ubiquitous products on the App Store charts, and was the No. 1 free iOS app as recently as February. Now Snapchat lets you use your Bitmoji avatar as a profile pic, online status indicator in message threads, as 2D stickers and as 3D characters that move around in your Snaps. 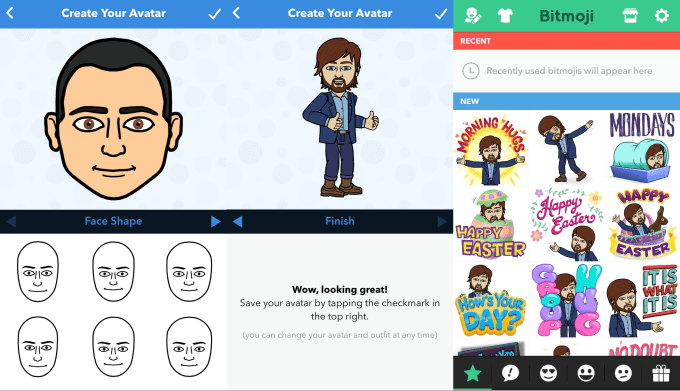 It’s actually surprising that Facebook has waited this long to clone Bitmoji, given how popular Instagram Stories and its other copies of Snapchat features have become. Facebook comment reels and Messenger threads could get a lot more emotive, personal and fun when the company eventually launches its own Avatars.

Mark Zuckerberg has repeatedly said that visual communication is replacing text, but that’s forced users to either use generic emoji out of convenience or deal with the chore and self-consciousness of shooting a quick photo or video. Especially in Stories, which will soon surpass feeds as the main way we share social media, people need a quick way to convey their identity and emotion. Avatars let your identity scale to whatever feeling you want to transmit without the complications of the real world.

For more on the potential of Facebook Avatars, read our piece calling for their creation: