Apple has spent years trying to live down the fiasco of swapping out Google for its own, underdeveloped version of Maps, and today at its WWDC event it unveiled a sizeable rebuild in iOS13 that will give it a big leap in dynamic rendering and interactivity, which could indeed bring a new wave of users back into the fold.

The updates are being rolled out across the US by the end of this year, Apple’s SVP of software engineering Craig Federighi said, with more countries getting added next year.

Federighi said that the team has covered some 4 million miles in the process of gathering more data for Maps — “Our team continues its obsession,” is how he put it — underscoring how mapping is a major priority for the company, not least because it is a cornerstone of getting Apple more users in connected vehicles by way of Car Play.

To be fair, Apple has a long road ahead of it: Google Maps, combined with Google-owned Waze, essentially dominate the market for mapping apps today, and that’s not just because Android is a more ubiquitous operating system.

Meg Frost, the director of product design, then came on to the stage for a demo. She noted that the new Maps app will feature a more detailed rendering of roads that will also include more data about public spaces such as beaches and parks, as well as buildings, handy when you are trying to find a specific address that isn’t immediately visible when you are on the move or in an unfamiliar place.

She also noted that users will now be able to mark and easily skip to favorite locations by way of a short tap. Favorites, in turn, can now be organised into handy collections to make it easier to call up a specific subject-based list rather than scroll through a larger list (for example, kids’ activities, or favorite restaurants, or houses of people you know, or places in a specific neighborhood). Collections can also be used when you are planning a trip somewhere to pin all the places that you will want to visit.

The rendering in the new Maps app is particularly nice looking, a little like Google’s Street View on steroids. When you spot something that catches your eye, you can zoom in on it with a set of binoculars, which lets you then look around the space more deeply in a three-dimensional experience. This seems to also extend into interior spaces, although I couldn’t quite tell from Frost’s demo. (It would make sense, considering that Apple has also been doing a lot of work on acquiring and building interior mapping IP.) 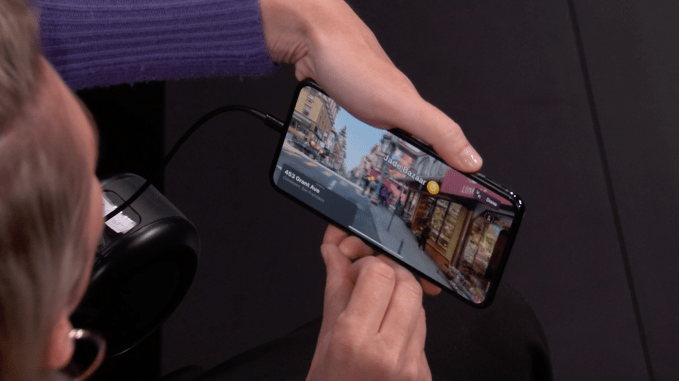 The binocular effect is notable for another reason: it’s also a sign of how Apple is using and envisioning use of Apple maps: it’s not just a practical tool that a person would use in real time when travelling from going from A to B. It becomes its own discovery platform.

Apple has yet to make any big moves into VR and AR, although it’s certainly been dabbling in it, but you can see how all of this could eventually become very useful to a company that has in recent times made a big shift into content and media that are used (and purchased!) for its hardware. Maps will likely be developing to fit with that vision (no pun intended) as well.

The Maps reveal also is important for one other aspect: the company has been going big on the privacy angle, not least because others have not. “Privacy is a fundamental human right,” Federighi said when he took over the presentation again, “and we engineer [it] into everything we do.” That, he said, extends to location and how you are tracked. The idea and implication here is that while Apple is aiming to provide an informative and entertaining maps experience, it’s doing so just for you — not to make you into one more of its data points. Hopefully, that commitment will not becoming a moving target itself.