Stewart Butterfield, known already for his part in building Flickr, a photo-sharing service acquired by Yahoo in 2005, decided to try his hand — again — at building a game. Flickr had been a failed attempt at a game called Game Neverending followed by a big pivot. This time, Butterfield would make it work.

To make his dreams a reality, he joined forces with Flickr’s original chief software architect Cal Henderson, as well as former Flickr employees Eric Costello and Serguei Mourachov, who like himself, had served some time at Yahoo after the acquisition. Together, they would build Tiny Speck, the company behind an artful, non-combat massively multiplayer online game.

Years later, Butterfield would pull off a pivot more massive than his last. Slack, born from the ashes of his fantastical game, would lead a shift toward online productivity tools that fundamentally change the way people work. 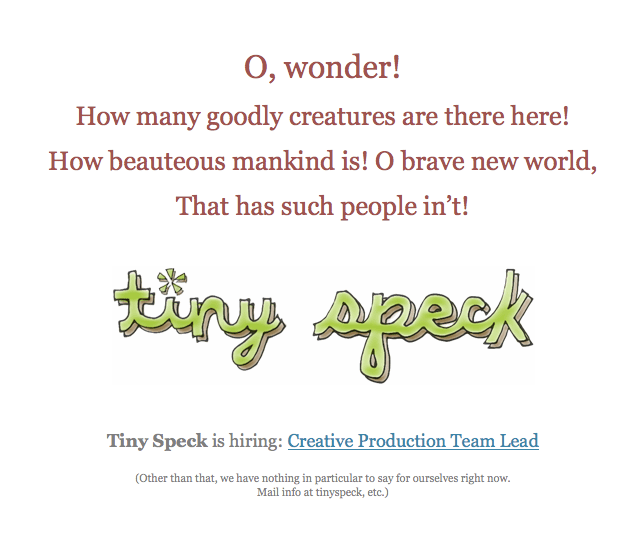 “So what is Tiny Speck all about?” Siegler wrote. “That is still not entirely clear. The word on the street has been that it’s some kind of new social gaming endeavor, but all they’ll say on the site is ‘we are working on something huge and fun and we need help.’”

Maybe I make a terrible boss, but at least I know it. Work with me: http://tinyspeck.com/jobs/cptl/

Siegler would go on to invest in Slack as a general partner at GV, the venture capital arm of Alphabet.

“Clearly this is a creative project,” Siegler added. “It almost sounds like they’re making an animated movie. As awesome as that would be, with people like Henderson on board, you can bet there’s impressive engineering going on to turn this all into a game of some sort (if that is in fact what this is all about).”

After months of speculation, Tiny Speck unveiled its project: Glitch, an online game set inside the brains of 11 giants. It would be free with in-game purchases available and eventually, a paid subscription for power users.