Warranties for purchased products is a $40 billion annual market. But in their current form, they are considered by some to be one of the bigger scams in the world of retail because they cost so much and often return too little.

Now there is an alternative emerging. A startup out of Minneapolis, Minn. called Upsie has decided to wage war on the old warranty, with more reasonable pricing (typically 70% lower than what the retailer offers) and a much more modern approach to selling and managing the warranty.

Its bet is that lower prices, and more flexible options for ordering, tracking and claiming against warranties, will drive more users to its service and take some business away from the retailers that largely dominate the market today. Today it’s announcing that it has raised $5 million led by True Ventures to build out that business in the U.S. Techstars Ventures, Matchstick Ventures, Syndicate Fund, M25 and angel investor Marc Belton also participated.

If you’ve ever purchased an expensive consumer electronics product, you know the problem that Upsie is tackling: warranties can cost a lot, and in many cases you’re not sure what you might even be getting out of it. And if you do find yourself in the unfortunate predicament of needing to file a claim, you may find the process a little less than efficient, but hopefully not as bad as this: 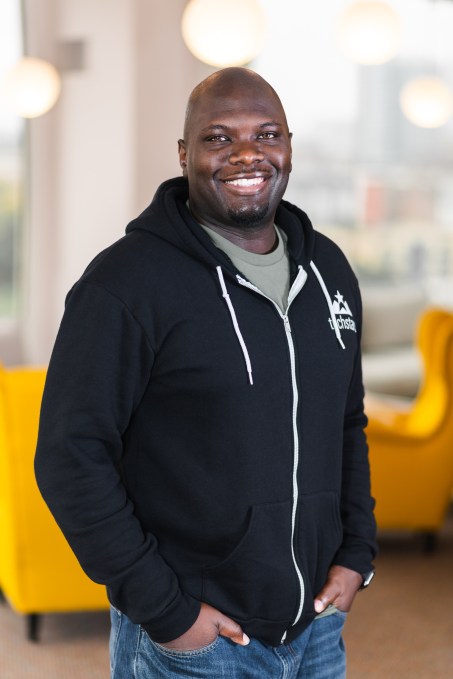 When an expensive purchase like a consumer electronics product breaks down, the buyer needs to pay out big money for repairs or replacements, and that worry drives many of those customers to pay a big sum for the guarantee that someone else will cover those liabilities.

The operative words in that last paragraph are “big sum”: a warranty can represent peace of mind, and sometimes actually help in those cases where something relatively new does break down, but one of the big issues is the mark-up that providers put on a service that preys on the fear of needing it — in some cases a warranty can cost as much as 900% more than the policy would cost if it were purchased directly from an insurance provider.

Bethea used to be a consultant to big-box retailers and in the work he did, he realised quickly that the retailers were taking advantage of consumers when they were selling warranties on top of products. “Consumers don’t know what the warranties actually cost,” he said. “That’s what pushed me into this.”

Upsie gives consumers the option to purchase warranties up to 60 days after the sale (or 45 for smartphones). The product itself needs a minimum 90-day warranty from the manufacturers themselves, and the Upsie warranty does not kick in until 30 days after it’s purchased — the idea being that it picks up right after the manufacturer warranty ends.

The warranties can be purchased online or through an app and they apply currently to around 15 categories and hundreds of electric goods covering areas like computers, wearables, phones, TVs, small and large appliances and outdoor tools. The Upsie app in itself is like your warranty file in your filing cabinet, except much simpler and lighter and less cluttered: it stores receipts, lets you scan SKUs to register the goods and more to make it easier. Then after a user purchases the warranty, it can be managed and claims can be filed by way of Upsie’s app.

The basic idea behind Upsie is reminiscent of the direct-to-consumer brands that have grown in popularity over the last several years.

Just as these have leveraged the web, mobile apps and more recently social media to build direct relationships with consumers, Upsie is also bypassing retailers and hoping that consumers will consider their cheaper alternatives, which in actuality have been negotiated with the same warranty service providers that the retailers use. It currently works with Centricity, and the plan is to expand it to a wider range over time.

Other companies have built businesses in the area of providing warranty services outside of what retailers offer, such as SquareTrade, which was acquired by AllState, and Asurion. Puneet Agarwal, a partner at True Ventures, believes that it stands out.

“Upsie is the only consumer-facing brand in the space, whereas everyone else is more of a back-end provider,” he said. “Their subscriber growth and engagement are tremendous and the end consumer identifies with them. Because of their direct consumer focus, they also offer a level of pricing, convenience and customer service the industry has not seen.” He added that the “big ambition” is “to make the idea of ‘upsie-ing’ a product as part of the the everyday lexicon of the consumer.”

Bethea said that one of the big early challenges was convincing insurance companies that D2C was a viable idea — which dissipated as insurance companies, like all brands and B2B2C businesses, began to consider the plethora of ways that people are buying goods today, which increasingly extend well outside the realm of just retailers.

The other challenge that is still one that Upsie will continue to work to surmount as it continues growing is convincing consumers to change their behavior. “Initially it was about convincing the industry that this is a market,” he said. “Today it’s awareness and giving consumers another option. ‘I didn’t know I could leave the register and purchase a plan afterwards’ is what we want people to be thinking.”

So far, the results have been pretty positive. Since exiting beta in 2016, Bethea said the company has grown 300% each year. Services are live only in the U.S., and while it works toward expanding to international markets, it will also be adding auto warranties to its plans next.

Living outside of Silicon Valley as I do, companies that are outliers from the normal pattern that often list the same litany of credentials (including but not limited to grads from Stanford or MIT, possible stint at YC, office in San Francisco, past history at other tech companies), but are still thriving, do tend to catch my eye. Upsie, with its roots in the Midwest and an African American founder (also not very common at the typical SV startup), and tackling something that is fundamentally broken but not flashy, ticks some of those boxes.

Turns out that True sees and wants to seek out more of this, too.

“Great companies are being built everywhere,” said Agarwal. “More and more of the companies we invest in are outside of the Valley or are building teams outside of the Valley and we encourage it. It can be a tremendous competitive advantage both from a talent and cost perspective. We have had great success investing in places like Michigan, Montana, Oregon, Wisconsin, Washington, even recently in Africa, and now in Minnesota with Upsie. I still do see a lot of bias from investors not wanting to invest outside of the Valley. There is no question they will miss out not because of high prices in the Valley but because of the opportunity.”