There are plenty of travel apps for researching flights and hotels or generally organizing your trips, but indie German developer Hans Knöechel struggled to find one that could gather all his travel-related information in one place, in addition to allowing a group of friends to collaborate on the trip-planning process. So he built one for himself: Lambus, an app that lets you organize your travel documents, manage expenses, plus collaborate and chat with fellow co-travelers about the trip being planned.

Previously a senior software engineer at Appcelerator in San Jose, Knöechel came up with the idea for Lambus after being on the road a lot himself, and finding existing travel apps lacking.

“When traveling, you either use a manual folder with dozens of pages for all your information — or countless apps to display travel expenses, booking confirmations and waypoint planning. Alternatives like Google Trips, Sygic and Roadtrippers were always limited to one person and never offered all the features I needed during the trip,” he explains. “This gave me the idea for Lambus: A collaborative platform on which travel groups — in real-time — can display all the properties of the trip in an easy-to-use platform: Waypoints, travel expenses, booking documents, notes, photos and chat,” he says.

The resulting app he refers to as a “Swiss Army Knife” for travel planning.

Like TripIt and others, travel documents can be shared with Lambus by forwarding emails to a unique personal email address. The imported documents — like plane tickets or Airbnb stays — will then be made available to all group attendees automatically. This is handy for group trips where often multiple people take turns making the various reservations, but don’t have any easy way to share the information with others beyond forwarding emails or writing down information in a shared online document.

Documents can also be uploaded through an “Import PDF” feature, as an alternative to email sharing. And photos can be added by snapping a picture or importing from the phone’s Camera Roll, as well. 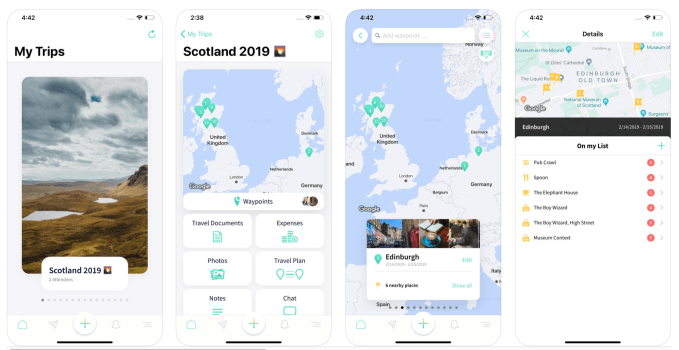 The photo feature is handy for saving those miscellaneous pieces of travel information — like how to access an Airbnb upon arrival, travel directions posted on an event or venue’s website, a helpful online review you saved and more. It’s also a fast way to import any other information, without having to rely on email or uploads.

In the expenses section, you can keep track of either private or group expenses by entering the amount and what it was for, and, optionally, if it’s been paid.

While largely aimed at group travel because of the collaboration and built-in chat features, the app can be used for solo trips, too.

In testing the app, we found there were a few kinks that still needed to be corrected.

The calendar, for example, didn’t include the days of the week, only the dates — which was unusual. The app also had trouble finding some points of interest — like a convention center, for example, when it was entered directly in the search box. (It came up when we searched for a “nearby place” to an existing waypoint, oddly.) This appears to be a bug.

Some parts of the German app hadn’t been localized to English, either. For instance, when viewing the detail page for a waypoint, the “On My List” section read: “Noch keine Orte in der Nähe geplant.” (Meaning: “No places planned nearby.”)

More importantly, Lambus didn’t turn imported documents into an easy-to-read itinerary, as TripIt does. The travel plan, instead, included a list of waypoints but not the dates and times, with all the details like flight numbers or hotel reservation numbers. That’s perhaps a deal-breaker in terms of dumping all other travel apps in favor of Lambus alone.

Despite its quirks, the concept here is solid and the app is nicely designed with a bright and clean look-and-feel. The app is only a couple of months old, so given a little more time, attention and a few more releases, it has the potential to become a seriously useful travel tool for group trip planning.

The name, “Lambus,” is an odd choice, we have to also note.

Knöechel says he was searching for a word that was easy to pronounce in many different languages, and settled on this — a domain name he already owned.

While Knöechel is the sole founder, Lambus is a team of seven, including mainly university friends, he says. The startup is seed-funded by the Ministry of Economics in Germany (~€120,000), and eventually has plans to generate affiliate revenue by offering hotel, flight, Airbnb and activity bookings in-app.

Lambus is live on iOS and Google Play.