Facebook has launched the start of its push into smart home software. Ignoring calls that it’s creepy, Facebook is forging onward with its Portal gadget Today Facebook quietly released iOS and Android Portal apps that let owners show off photos on the screen without sharing them to the social network, and video call their home while they’re out. 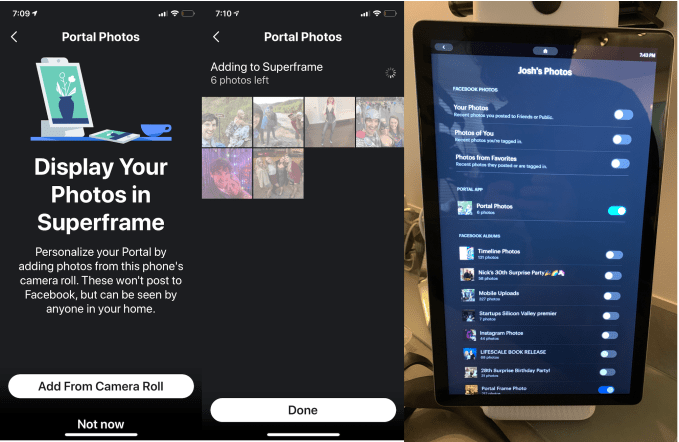 The app isn’t likely to move the needle for Portal whose potential users fall into two camps: those so alarmed by Facebook’s privacy practices that they couldn’t imagine putting its camera and microphone in their home, and those ambivalent or ignorant regarding the privacy backlash who see it as an Amazon Echo with a nice screen and easy way to video call family. Critics were mostly surprised by the device’s quality but too freaked out to recommend it. Those willing to buy it have given it a 4- to 4.4-star average rating on Amazon, praising its AI camera that keeps people in frame of a video chat while they move though jeering some setup difficulties.

Facebook announced at f8 a month ago that the Portal app was coming and eventually so would encrypted WhatsApp video calls. It also extended sales to Europe and Canada, though the new app is currently only available in the US according to Sensor Tower which tipped us off to the launch. The $199 10-inch Portal and $349 15.6-inch Portal+ launched in October, soured by a swirl of Facebook privacy scandals. Last week, the company tried to score some points with the public by funding an art project displayed at the SF Museum Of Modern Art. But the “immersive” exhibit was just some Portals stuck to some funky painted wooden backdrops, and it all felt smarmy and forced.

Facebook stuck Portals into wooden backdrops and called it art

Portal’s app lets you video call your Portal so you can say hi to family while you’re out. That’s great for traveling parents or seeing who is around the house in the post-land line age. The app also allows you to add and remove accounts on Portal and manage who’s in your speed dial Favorites, which you could already do from the device. There’s still no Amazon Prime Video or Smart home controls as were promised at F8.

The option to send photos directly from your camera roll to Portal’s Superframe fixes the worst feature of the digital photo frame. Previously you’d have to select just from photo/video albums you’d shared to Facebook. That meant you were only showing off sacchrine photos you were willing to post online, and if you selected Your Photos or Photos Of You, you might end up displaying shots that were embarrassing or that don’t make sense outside of the News Feed. 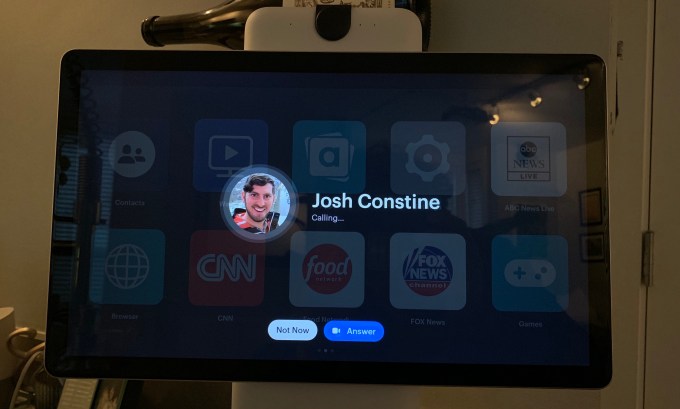 My workaround was to create a Facebook album of photos for Portal set to be visible only to me, but that was a hassle. Now you can manually grab pics and videos from your phone and send them to Portal without the worry they’ll show up on your profile. Portal also now can show off your Instagram photos, as was announced at F8. Still missing is Google Assistant support, which Facebook told me it was working to integrate last year.

Facebook’s steady improvements to Portal might not have shook its paranoia-inducing reputation amongst tech news readers and privacy enthusiasts, but they’ve kept it perhaps the best big screen and camera-equipped smart speaker. But in the seven months since launch, Google has copied Portal’s auto-framing camera for video chat in its new Nest Hub Max while Amazon is making a slew of home appliances smart. Portal will need more marquee innovations and some brand rehabilitation if it’s going to stay competitive.

[Postscript: The Portal app is also the foundation of Facebook’s foray into becoming a smart home competitor to Google/Nest, Amazon Echo, and Samsung SmartThings. Whether Facebook builds more gadgets or partners to make others’ more social, the Portal app is your remote control. It might not look like much today, but what starts small for Facebook often blossoms into giant strategic initiatives.]