Facebook’s first hardware product combines Alexa (and eventually Google Assistant) with a countertop video chat screen that zooms to always keep you in frame. Yet the fancy gadget’s success depends not on functionality, but whether people are willing to put a Facebook camera and microphone in their home even with a physical clip-on privacy shield.

Knowing buyers might be creeped out, Facebook’s VP of Portal Rafa Camargo tells me “We had to build all the stacks — hardware, software, and AI from scratch — and it allowed us to build privacy into each one of these layers”. There’s no facial recognition and instead just a technology called 2D pose that runs locally on the device to track your position so the camera can follow you if you move around. A separate chip for local detection only activates Portal when it hears its wake word, it doesn’t save recordings, and the data connection is encrypted. And with a tap you can electronically disable the camera and mic, or slide the plastic privacy shield over the lens to blind it while keeping voice controls active.

As you can see from our hands-on video demo here, Facebook packs features into high-quality hardware, especially in the Portal+ which has a screen you can pull from landscape to portrait orientation and an impressive-sounding 4-inch woofer. The standard Portal looks and sounds a bit stumpy by comparison. The Smart Camera smoothly zooms in and out for hands-free use, though there are plenty of times that video chatting from your mobile phone will be easier. The lack of YouTube and Netflix is annoying, but Facebook promises there are more video partners to come. 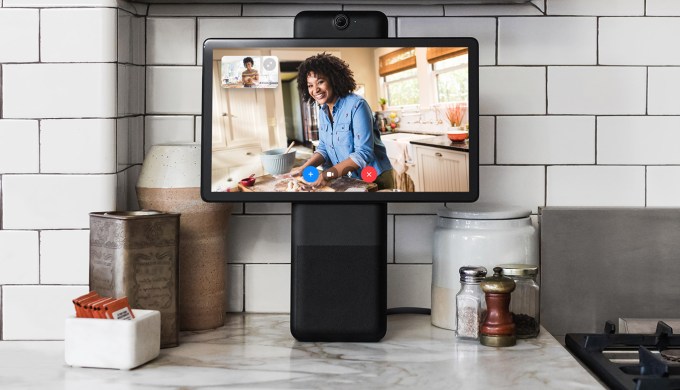 The $199 Portal comes in $20 cheaper than the less functional Amazon Echo Show (read our gadget reviewer Brian Heater’s take on Portal below), and will also have to compete with Lenovo and Google’s upcoming version that might have the benefit of YouTube. Portal and the $349 Portal+ go on sale today in the US on Portal.Facebook.com, Amazon, and Best Buy in both black and white base colors. They ship in November when they’ll also appear in physical Amazon Books and Best Buy stores.

Deep inside Facebook’s Menlo Park headquarters, the secretive Building 8 lab began work on Portal 18 months ago. The goal was to reimagine video chat not as a utilitarian communication tool, but for “the feeling of being in the same room even if you’re thousands of miles apart” Facebook Portal’s marketing lead Dave Kaufman tells me. Clearly drinking the social network’s Kool-Aid, he says that “it’s clear that Facebook has done a good job when you’re talking about the breadth of human connection, but we’re focusing on the depth of connection.”

The saddening motive? 93% of the face-to-face time we spend with our parents is done by the time we finish high-school, writes Wait but Why’s Tim Urban. “It felt like punch in the gut to people working at Facebook” says Kaufman. So the team built Portal to be simple enough for young children and grandparents to use, even if they’re too young or old to spend much time on smartphones.

Before you even wake up Portal, it runs a slideshow of your favorite Facebook photos and videos, plus shows birthday reminders and notifications. From the homescreen you’ll get suggested and favorite Messenger contacts you can tap to call, or you can just say “Hey Portal, call Josh.” Built atop the Android Open Source framework, Facebook designed a whole new UI for Portal for both touch and voice. Alex is integrated already. “We definitely have been talking to Google as well” Camargo tells me. “We view the future of these home devices . . . as where you will have multiple assistants and you will use them for whatever they do best . . . We’d like to expand and integrate with them.” 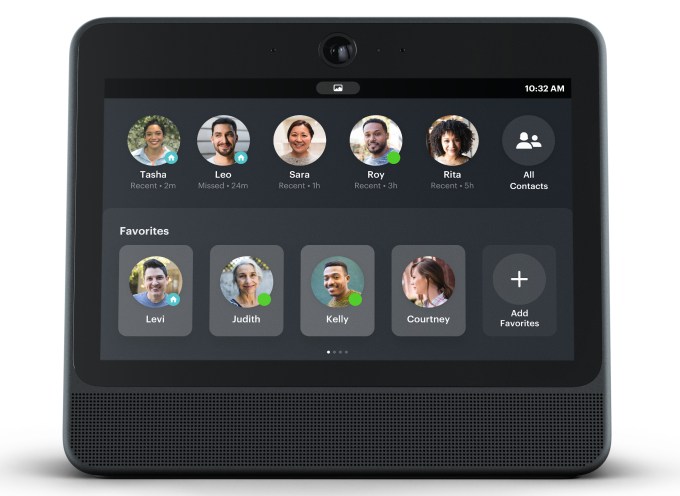 Portal uses your existing social graph instead of needing to import phone numbers or re-establish connections with friends. You can group video chat with up to seven friends, use augmented reality effects to hide your face or keep children entertained, and transfer calls to and from your phone. 400 million Facebookers use Messenger video chat monthly, racking up 17 billion calls in 2017, inspiring Facebook to build Portal around the feature. Kaufman says the ability to call phone numbers is in the roadmap, which could make Portal more tolerant of people who don’t live on Messenger.

Once a video call starts, the 140-degree, 12-megapixel Smart Lens snaps into action, automatically zooming and recentering so your face stays on camera even if you’re bustling around the kitchen or playing with the kids. A four-microphone array follows you too to keep the audio crisp from a distance. If a second person comes into view, Portal will widen the frame so you’re both visible. Tap on a person’s face, and Portal Spotlight crops in tight around just them. Facebook worked with an Oscar award-winning cinematographer to make Smart Lens feel natural. Unfortunately it can’t track pets, but that got so many requests from testers that Facebook wants to add it in. I suggested Portal should let you call businesses so you could move around or be entertained while on hold, though the team says it hasn’t discussed that.

Portal’s most adorable feature is called Story Time. It turns public domain children’s books into augmented reality experiences that illustrate the action and turn you into the characters. You’ll see the three little pigs pop up on your screen, and an AR mask lets you become the big bad wolf when you might impersonate his voice. Kids and grandparents won’t always have much to talk about, and toddlers aren’t great conversation partners, so this could extend Portal calls beyond a quick hello. 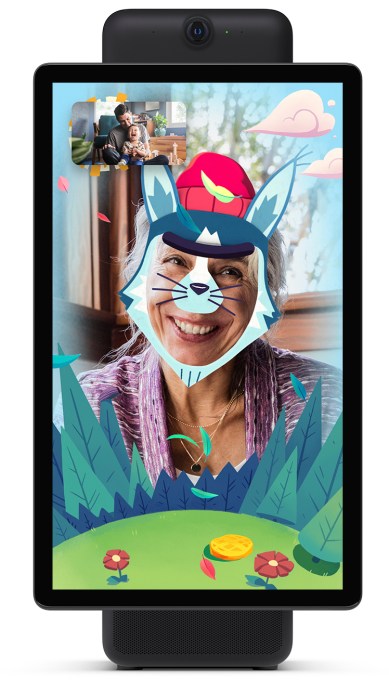 Beyond chat, Facebook has built a grip of third-party experiences into Portal. You can use any Alexa to summon Spotify, Pandora, or iHeartRadio, and even opt to have songs play simultaneously on yours and someone else’s Portal for a decentralized dance party. Portal also acts as a Bluetooth speaker, and Spotify Connect lets it power multi-room audio. Portal+ in portrait mode makes a great playlist display with artwork and easy song skipping. The Food Network and Newsy apps let you watch short videos so you follow recipes or catch up on the world as you do your housework. And while you can’t actually browse the News Feed, Facebook Watch pulls in original premium video as well as some viral pap to keep you occupied.

My biggest gripe with Portal is that there’s no voice controlled text messaging feature. Perhaps we’ll see that down the line, though, as Facebook Messenger is now internally testing speech transcription and voice navigation. You can’t use WhatsApp, Instagram Direct, or pop open a web browser either. Even with the Smart Lens subject tracking, Portal is stuck on a table and lacks the convenience of video chatting from a phone in your portable, stabilized gimbal commonly known as your hand. Other shortcomings could be shored up with the gadget’s app platform that is currently invite-only, but Facebook will have to prove there are enough Portal buyers out there to lure developers.

So how will Facebook make money on Portal? “we definitely don’t have ads on the devices, and we don’t see that coming” says Camargo. Facebook wouldn’t reveal the margin it will earn selling the device, but when asked if it’s a loss leader for driving ad views on its social network, Camargo tells me “I wouldn’t say that’s the case”, though boosting engagement is surely an incentive. Portal could earn money from enterprise clients, though, as Facebook is already internally testing a version of its Workplace team collaboration’s video chat feature on Portal. The team laughs that Facebook employees are starting to prefer Portal to their office’s expensive and complex video conference hardware.

After Cambridge Analytica and Facebook’s recent 50 million user breach, it’s understandable that some people would be scared to own Portal’s all-seeing eye. Privacy makes Portal a non-starter to many even as they seem comfortable with Google or Amazon having access to their dwelling. In hopes of assuaging fears, Facebook put a dedicated button atop Portal that electronically disconnects the camera and microphone so they can’t record, let alone transmit. Portal isn’t allowed to save video, and Facebook says it won’t store your voice commands (though Alexa does). Oh, and just to kill this pervasive rumor, Camargo definitively confirmed that Facebook’s smartphone apps don’t secretly record you either. 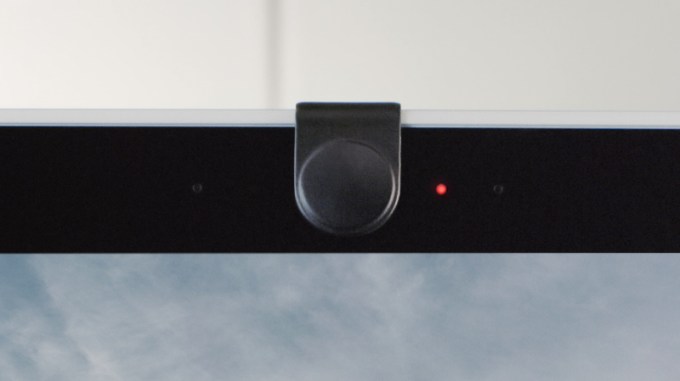 For added protection, snap on the plastic privacy shield and you’ll blind the lens while still being able to voice-activate music and other features. If you use these, especially when you’re not video chatting, the privacy threat drops significantly. The fact that the shield isn’t attached on a hinge to swing on the place makes it feel like a last-minute scramble after a year of privacy scandals, even though Camargo claims all hardware decisions were locked in before this year.

Doing his part on the PR offensive to combat the privacy narrative, Facebook CEO Mark Zuckerberg shared a photo of his young daughters playing with Portal, and wrote “Our girls don’t use a lot of screens yet, but we’re happy for them to do video calls to see their grandparents or so I can see them when I’m traveling.”

You could see Zuckerberg’s willingness to ship Portal amidst a storm of negative press as either infuriatingly negligent as Facebook’s privacy troubles remain, or a show of impressive conviction that the smart home is a future people want that the company must be part of. Maybe Portal is an improbable Hail Mary, but maybe it’s a calculated bet that the cynical and vocal minority don’t represent the average person who cares more about convenience than privacy. Camargo admits that “If no one wants it, ever, we will reassess. But we also don’t think we’ll come and get it all right so we will continue to evolve, we’re already investing in expanding the product line with more products we want to launch next year.” 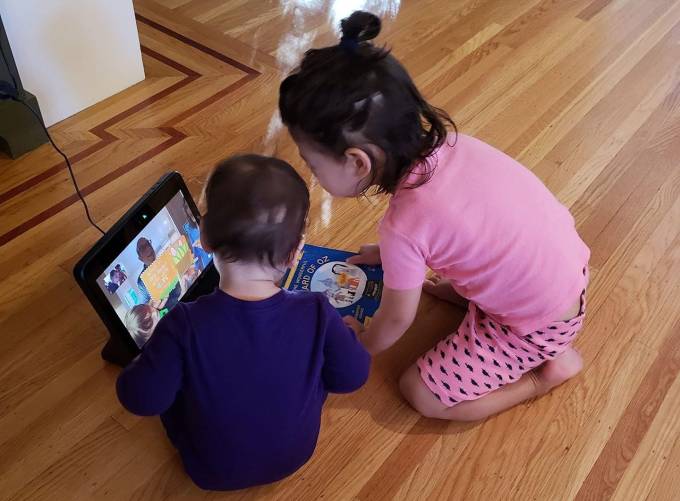 Overall, Portal could replace your favorite Alexa device and add seamless video chatting through Messenger if you’re willing to pay the price. That’s both in terms of the higher cost, but also the ‘brand tax’ of welcoming the data-gobbler with a history of privacy stumbles into your home. But Facebook also benefits as a neutral party to Amazon Alexa and Google. If it can integrate both assistant into one device alongside Portal’s own, it could offer the best of all worlds.

For a first-time hardware maker, Facebook did a remarkable job of building polished devices that add new value instead of reinventing the smart home wheel. Teaming up with Amazon and eventually Google instead of directly competing with their voice assistants shows a measure of humility most tech giants eschew. Yet a history of “move fast and break things” in search of growth has come back to haunt Facebook. Video chat is about spending time with people you love and trust, and Facebook hasn’t earned those feelings from us. 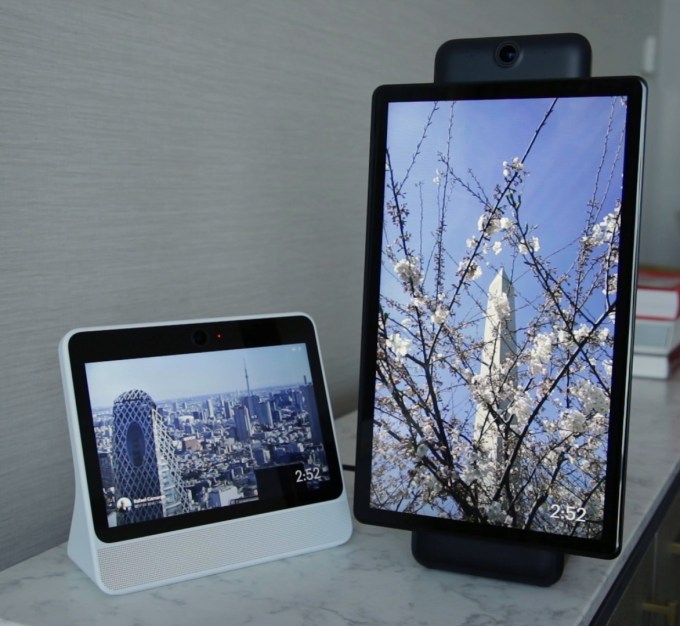