The U.S. no longer leads the smart speaker market, according to new data from Canalys out this morning, which found China’s smart speaker shipments grew by 500% in Q1 2019 to overtake the U.S. and achieve a 51% market share.

The firm said shipments in China reached 10.6 million units, which was driven by “festive promotions.”

More specifically, Baidu had a huge quarter thanks to an exclusive sponsorship deal with China’s national TV channel, CCTV, on its New Year’s Gala on Chinese New Year’s Eve — one of the biggest entertainment shows in terms of viewer numbers. This promotion prompted users to download the Baidu app, which distributed more than 100 million coupons to an audience of 1.2 billion during the show, and drove awareness around the brand’s smart speakers, Canalys says. 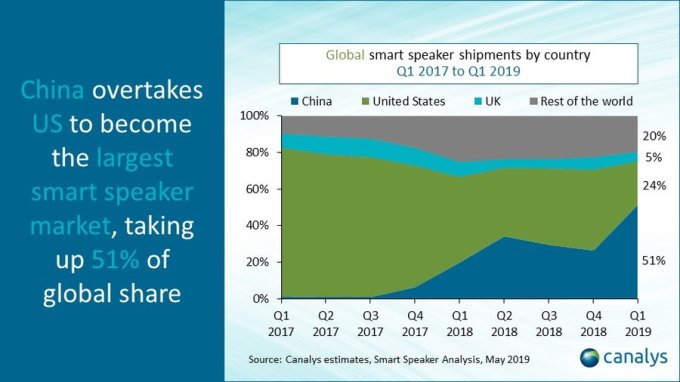 “The lightning fast development in China is largely driven by vendors pouring in large amounts of capital to achieve dominant share quickly,” noted Nicole Peng, VP of Mobility at Canalys, in a statement. “This strategy is favoured by internet service providers like Baidu, Alibaba and Tencent who are used to spending billions on traffic acquisition and know how to reach critical installed base fast.”

Other brands, combined, accounted for a further 2.9 million shipments. That includes Apple’s HomePod, whose market share was so small it got wrapped into this “Others” section instead of being broken out on its own. 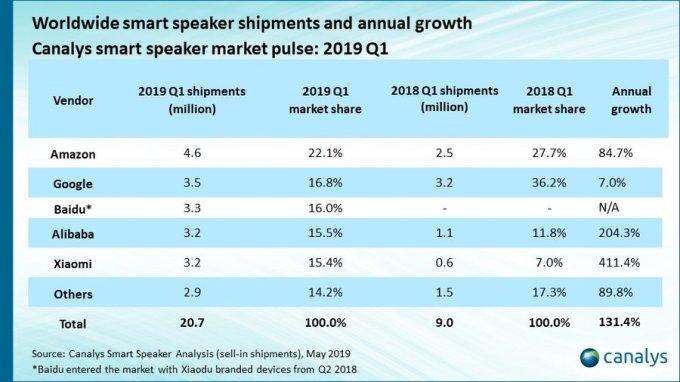 Overall, the global smart speaker market returned to triple-digit annual growth of 131% in the quarter, reaching 20.7 million total Q1 shipments — up from just 9 million in the first quarter of 2018.