We can make charts galore about the tech IPO market. Yet none of them diminish the profound sense that we are in uncharted territory.

Never before have so many companies with such high revenues gone public at such lofty valuations, all while sustaining such massive losses. If you’re a “growth matters most” investor, these are exciting times in IPO-land. If you’re the old-fashioned value type who prefers profits, it may be best to sit out this cycle.

Believers in putting market dominance before profits got their biggest IPO opportunity perhaps ever last week, with Uber’s much-awaited dud of a market debut. With a market cap hovering around $64 billion, Uber is far below the $120 billion it was initially rumored to target. Nonetheless, one could convincingly argue it’s still a rich valuation for a company that just posted a Q1 loss of around $1 billion on $3 billion in revenue.

So how do Uber’s revenues, losses and valuation stack up amidst the recent crop of unicorn IPOs? To put things in context, we assembled a list of 15 tech unicorns that went public over the past three quarters. We compared their valuations, along with revenues and losses for 2018 (in most cases the most recently available data), in the chart below: 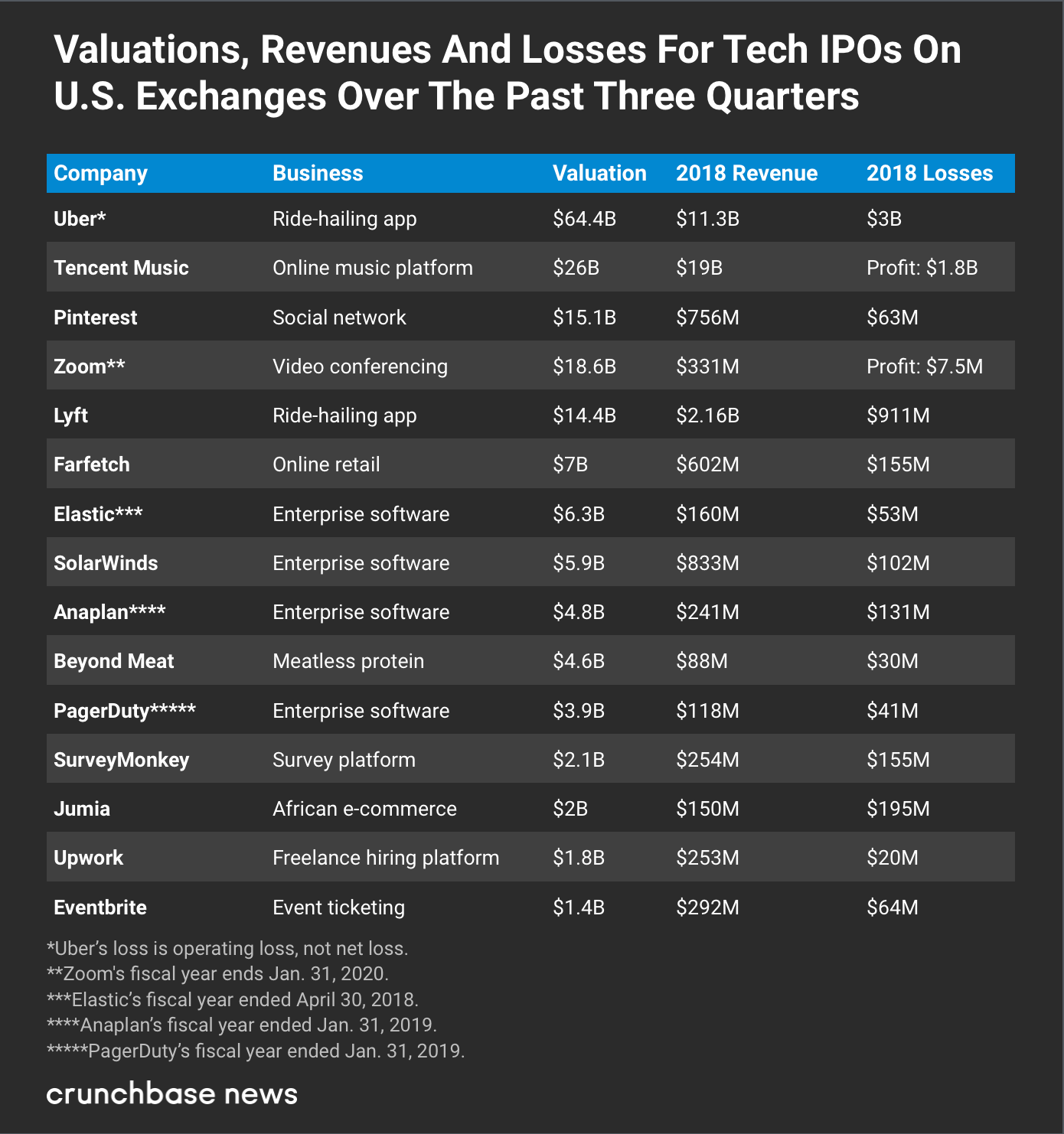 Put these companies altogether in a pot, and they’d make one enormous, money-losing super-unicorn, with more than $25 billion in annual revenue coupled to more than $6 billion in losses. It’ll be interesting to revisit this list in a few quarters to see if that pattern changes, and profits become more commonplace.

“If the era of the Internet IPO had a theme song, it might be this: There’s no business like no business.”

That notion made sense for bubble-era companies, which commonly went public a few years after inception, before amassing meaningful revenues.

That tune won’t work this time around. If the era of the unicorn IPO had a theme song, it wouldn’t be nearly as catchy. Maybe something like: “There’s no business like lots of business and lots of losses too.”

I won’t be buying tickets to that musical. But when it comes to buying IPO shares, the unicorn proposition is a bit more appealing than the 2000 cycle. After all, it’s reasonably plausible for a company with dominant market share to tweak its margins over time. It’s a lot harder to grow revenues from nothing to hundreds of millions or billions, particularly if investors grow averse to funding continued losses.

Of course, the dot-com bubble and the unicorn IPO era do share a common theme: Investors are betting on an optimistic vision of future potential. If expectations don’t pan out, expect share prices to follow suit.