Fan reaction to Game of Thrones’ final season may be mixed, but the show has been undeniably good for HBO’s network — and for its over-the-top streaming service, HBO NOW. The Season 8 premiere drew in 11.8 million live viewers and 17.4 million viewers across all platforms on the day of airing, as well as a record number of sign-ups to HBO NOW, which in March was reported to have 8 million subscribers. But the show’s finale airs this Sunday, and HBO is set to see a huge exodus of streaming subscribers, as result.

According to new research from Mintel released this week, HBO NOW users are twice as likely as those from any other streaming service to cancel their subscription when a specific show ends. 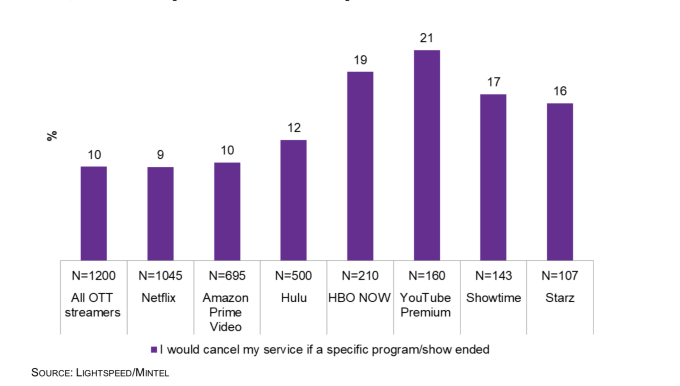 The only service that performed worse on this front was YouTube Premium. And that’s not exactly an apples-to-apples comparison, given that its subscriber base also includes YouTube viewers who want to go ad-free — not just those who are there for its original content.

The new findings are telling in terms of how heavily HBO has been relying on Game of Thrones to grow its streaming platform over the years. In addition, the metrics indicate potential struggles ahead for HBO parent company WarnerMedia’s forthcoming streaming service. Due to launch into beta later this year, the service will be led by HBO content. But without new episodes of Game of Thrones, it will have to rely on other popular shows, like Westworld, to pull in viewers.

However, even though Westworld is HBO’s second most-watched show, Game of Thrones has triple the number of viewers.

The network is clearly aware of the negative impacts to its streaming platform the end of Thrones will bring. It already greenlit plans for a Game of Thrones prequel, which is now filming. And it has other spin-offs in the works, too.

The prequel may not attract the same fervor as the original, but it could help bring viewers back. In the meantime, however, HBO NOW is set to see a significant number of subscribers cancelling after Sunday night.

Mintel also found that HBO NOW doesn’t have any significant traction beyond consumers who already subscribe to four or more over-the-top streaming services. These users pay for Netflix, Amazon Prime Video and Hulu, then threw HBO into the mix in order to gain access to Game of Thrones. They’re not necessarily loyal to the network itself or interested in its other programming. And at $14.99 per month, HBO NOW is a fairly expensive addition.

With new steaming services from Apple and Disney poised to launch in the months ahead, a number of consumers will likely shift their HBO NOW dollars over to the newcomers instead, or simply pocket their savings.

The researchers also believe that smaller, lesser-known streaming services could benefit by positioning their offerings as a more affordable alternative to HBO NOW. 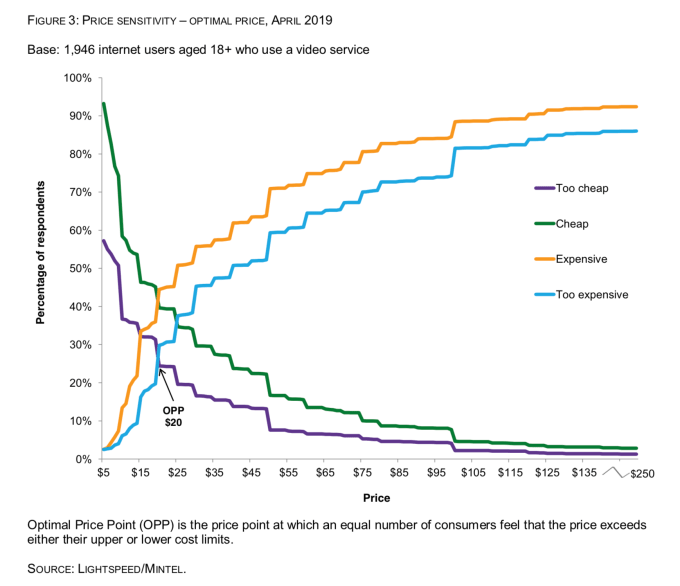 This is especially true because the study found that consumers’ ideal price point for a “perfect” streaming package — one that had everything they want to watch — would be around $20 per month. Today, that number affords them to purchase maybe two or, at the most, three services. A fourth service, like HBO NOW, has been more of a luxury expense — a must-have while Game of Thrones aired, perhaps, but not one consumers will feel comfortable paying for when the show ends.

The new report stops short of making a firm prediction on the number of cancellations HBO NOW will soon see, though.

“I’m hesitant to put a direct number on subscriptions or cancellations,” says Mintel analyst analyst Buddy Lo. “We know from the research that nearly 20 percent of HBO NOW consumers say they would cancel service over a specific program, but we didn’t definitively ask if it was specifically Game of Thrones that they will cancel over,” he tells TechCrunch.

Of course, it’s hard to imagine what other program HBO NOW subscribers would have had in mind when responding.

Mintel isn’t the only firm to dive into the potential impacts to HBO NOW subscriber growth resulting from the end of its flagship series. Last month, Second Measure pointed to historical trends that help to forecast the big subscriber drop ahead. 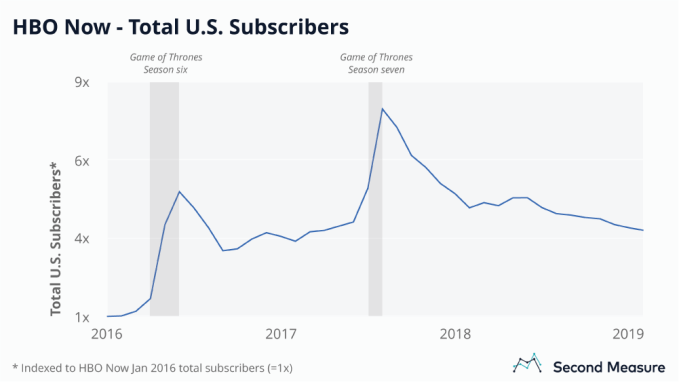 It also found that HBO NOW subscribers were far less loyal than those on other streaming services, including, in order, Netflix, Hulu and even CBS All Access — the latter thanks to the Star Trek: Discovery fan base.

And neither HBO NOW nor CBS All Access came anywhere close to the retention numbers for Netflix and Hulu, which have six-month retention figures of 74% and 60%, respectively. 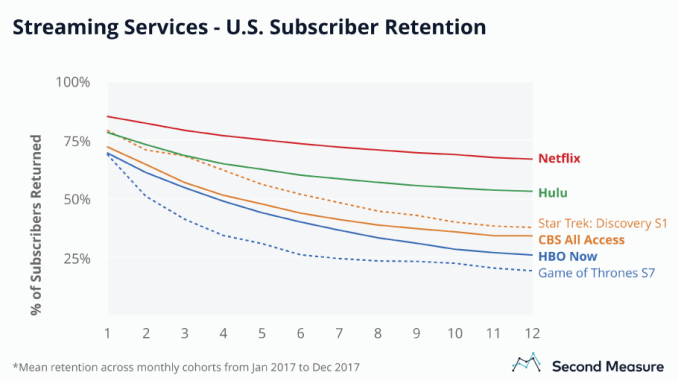 Second Measure also found Netflix and Hulu had far more exclusivity than rivals — meaning, a larger share of subscribers who only paid for their service and no others.

For Netflix, this figure was 78%. HBO NOW, by comparison, only had a 27% share of subscribers who were exclusive to its platform. 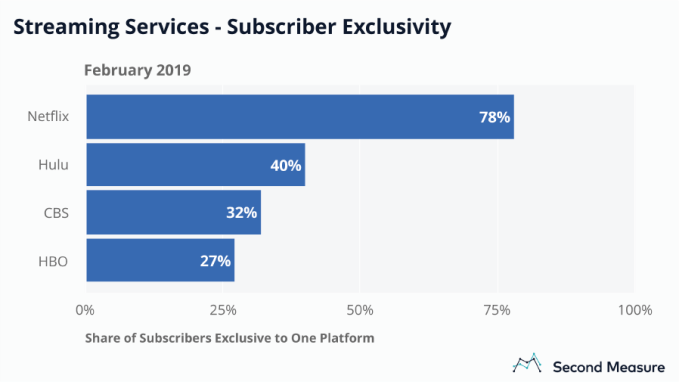 The firm predicts loyalty to a single service will continue to decline in the years ahead as consumer demand for streaming content grows.

The increased competition will make it even harder for HBO to fare well on its own. That’s why it makes sense WarnerMedia is tapping into its other properties to instead create an HBO-led “bundle” that feels more compelling than HBO alone.