This month, Amazon announced it’s investing $800 million in its warehouses and delivery infrastructure in order to double the speed of Prime shipping by reducing it to only one day. Now Walmart is following suit with a one-day shipping announcement of its own. The rival retailer says it will begin to offer free, NextDay delivery on select Walmart.com orders over $35 — without a membership fee.

This offer will initially be available to customers only in Phoenix and Las Vegas beginning on Tuesday, May 14, 2019, and will then expand to customers in Southern California over the next few days. The rollout will then continue “gradually” over the months ahead, with a goal of reaching 75% of the U.S. population — including 40 of the top 50 U.S. metros — by year-end.

Walmart, on the other hand, is starting smaller. Its NexDay delivery will be available as a standalone, curated shopping experience where customers can browse up to 220,000 of the most frequently purchased items.

This includes things like diapers, electronics, toys and household needs, and soon more. Everything in the cart has to be NextDay-eligible and total more than $35 to qualify. The cut-off times for the order will vary by location, Walmart says. Orders will be delivered primarily by national carriers, and in some cases, regional carriers. 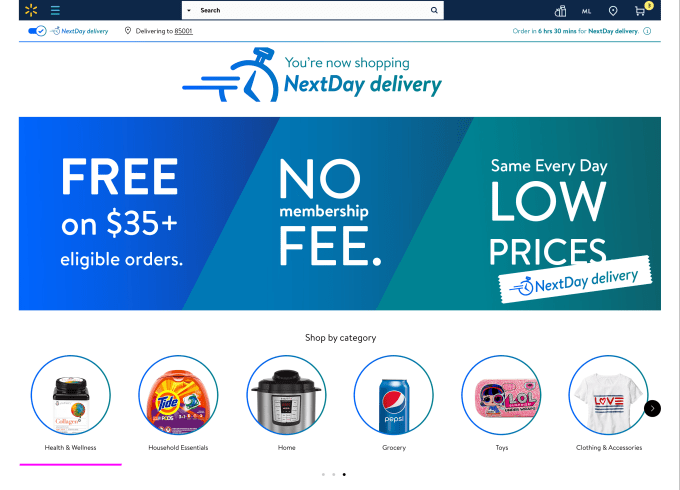 This more limited focus in terms of inventory (for now at least) makes NextDay more of a competitor to Target’s Restock than to Amazon one-day Prime ambitions, as — like Restock — it requires a $35 minimum order. Restock, though, has customers “filling a box” with items and is largely focused on day-to-day shopping. Meanwhile, Walmart’s NextDay selection is wider than Restock’s some 35,000 items. (However, ahead of Walmart’s announcement, Target pushed out news that its same-day “Drive Up” curbside service had now expanded to over 1,250 U.S. stores.)

Walmart’s focus on matching Amazon’s efforts — but with a different set of conditions and “without a membership fee” — is now par for the course.

For example, Walmart in early 2017 first announced it would begin to offer free, two-day shopping on more than 2 million items with no need for a membership — as long as orders totaled $35.00 or more. The retailer had been trialing such a sped-up shipping system for years — starting with a test of its answer to Prime back in 2015. Dubbed ShippingPass at the time, the program initially began with 1 million items and three-day delivery, then was lowered to two days while the number of eligible items doubled.

This past October, Walmart expanded two-day shipping to its Marketplace sellers, as well.

Now, it’s focused on one-day. Walmart says this is not in response to Amazon’s news, but rather had plans already in progress. 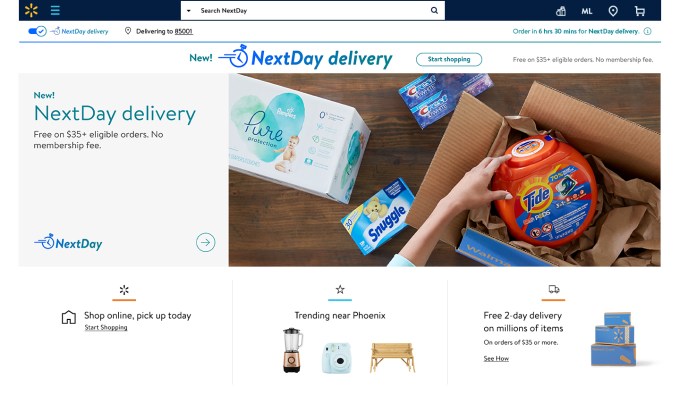 “We can offer fast, convenient shipping options because we’ve built a network of fulfillment assets that are strategically located across the U.S. We’ve also done extensive work to ensure we have the right products in the right fulfillment centers based on where customers are located and what they’re ordering,” said president and CEO of Walmart E-Commerce, Marc Lore.

Lore had sold his e-commerce startup Jet.com to Walmart for $3 billion in 2016. While it lives on as a more urban-focused delivery service, its influence on Walmart’s broader e-commerce efforts — particularly around delivery logistics — is seen in these expanded efforts to improve delivery times that also reduce costs while keeping prices low for consumers. Jet, for example, had offered credits to consumers who bought their items from the same nearby warehouse. That’s not entirely different from what Walmart NextDay is doing.

As Lore explains, NextDay is affordable for Walmart.

“Our new NextDay delivery isn’t just great for customers, it also makes good business sense. Contrary to what you might think, it will cost us less – not more – to deliver orders the next day,” he says. “That’s because eligible items come from a single fulfillment center located closest to the customer. This means the order ships in one box, or as few as possible, and it travels a shorter distance via inexpensive ground shipping. That’s in contrast to online orders that come in multiple boxes from multiple locations, which can be quite costly.”

Forrester analyst Sucharita Kodali suggests a bit more caution. She agrees that having another place to get overnight shipping is a win for consumers, but there could still be challenges.

“I think that makes sense theoretically, but whether or not they can make the economics work depends on the quality of the assortment and how many people actually use it. Also, I don’t know how easily it scales,” she says.