Spotify is testing its own version of Stories — the sharing format popularized by social apps like Snapchat and Instagram that has since made its way to other apps like Facebook, YouTube, WhatsApp and others. In Spotify’s case, it’s not called “Stories” but rather “Storyline,” and the focus is on allowing artists to share their own insights, inspiration, details about their creative process or other meanings behind the music.

This is very much similar to what Spotify’s “Behind the Lyrics” feature today offers. But instead of pop-up cards that load in time with the music, Spotify Storyline is very much a Stories-like experience, where users tap through the different screens at their own pace, and where horizontal lines at the top indicate how many screens still await them ahead.

@spotify hi. for about a yr now my band’s mgmt has tried get yall to take down some… outdated… facts on behind the lyrics for our song “Hard Times”.
the facts are: it’s all embarrassing & there was no “bright side”… hence the title, Hard Times.
thank you & goodnight.

By comparison, “Behind the Lyrics” pulls in this sort of background information from Spotify’s partner, Genius — and Genius doesn’t always get things right. This, in fact, was the cause of a bit of an uproar recently, when Paramore singer Hayley Williams took to Twitter to yell at Spotify for running “outdated facts” on “Behind the Lyrics” — something she said her management team had tried to get changed for a year.

After her tweet went viral, Genius reached out to help. But following the incident, music fans pointed out other inaccuracies in “Behind the Lyrics,” including misstated facts on 21 Pilots’ song “Jumpsuit” and Travis Scott’s “Yosemite,” for example. 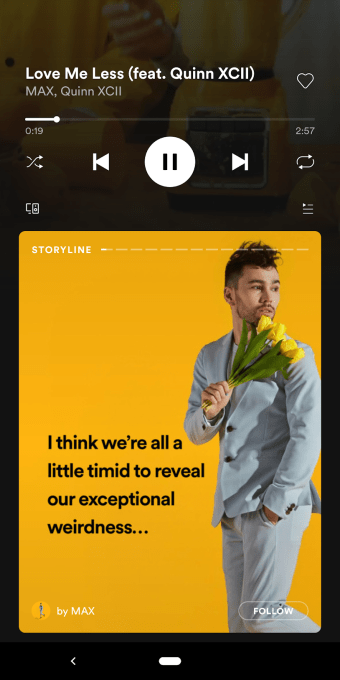 For Spotify, one possible solution to this problem could be to allow artists and their management teams to take control over what’s displayed as the song plays — while adopting the popular Stories format in the process. But at present, the Storyline feature is appearing on top of “Behind the Lyrics,” which is a bit odd and confusing.

We understand that Storyline is only a test for the time being on both iOS and Android, but not desktop. It’s available in the U.S. and in other markets, but Spotify isn’t commenting as to who may be seeing the test at this time or where.

If you are a part of the test group, you’ll see an indicator on the bottom of the screen that alerts you to the additional content. You can then swipe up anywhere on the screen that’s not a button in order to reveal the story and start tapping. The stories may contain lyrics, text or images. For the time being, there’s no direct way for any artist or management team to contribute to Storyline. Those involved are working with Spotify directly. But it wouldn’t be unreasonable to think that the feature could be something that’s built into the Spotify Artist Dashboard in the future, if it proved to deliver the sort of positive engagement Spotify hopes to see.

The feature, if launched, would give Spotify its own sort of original content — an area that hadn’t fared so well in the past when Spotify was producing its own original videos, for example. And it would better cater to Spotify’s younger demographic who already understand and regularly use Stories in other social apps.

Android Police was first to spot the news (via Reddit), and found it was live on a handful of songs, including Jonas Brothers’ “Sucker” and several by Billie Eilish (“Bad Guy,” “Bury a Friend,” “When the Party’s Over,” “Wish You Were Gay”). We also understand it’s showing up on MAX’s “Love Me Less.” Plus, Reddit users claim to have seen on it 2 Chainz’ “Forgiven,” The Beaches’ “Snake Tongue,” and others.

“We are always testing new ways to create better experiences for more users,” a spokesperson said, when asked about the feature. The company didn’t offer any information about when it would roll out more broadly.