Following news of Amazon’s plans to reduce Prime shipping down to one day, the company this morning announced an expansion of its Delivery Service Partner program, which now includes a new incentive that encourages existing Amazon employees to start their own package delivery company. The partner program, first announced last year, includes access to Amazon’s delivery technology, hands-on training and a suite of other discounts for assets and services like vehicle leasing and insurance. For employees, it now includes a $10,000 incentive, too.

The retailer says it will fund startup costs up to $10,000, as well as the equivalent of three months of the former employee’s last gross salary, to give the employees the ability to get their new business off the ground without worrying about a break in pay.

Amazon said last year that people were able to start their own delivery business with only $10,000. At the time, military veterans were able to get that $10K reimbursed, as Amazon was investing a million into a program that funded their startup costs.

The new incentive to do the same for any employee — and offer them three months’ pay on top of that — is a much broader commitment. And it’s one that makes sense, given Amazon’s lofty ambitions to double the speed of its shipments. 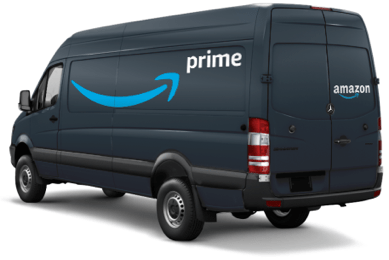 Employees — or any other entrepreneur — who wants to become a delivery partner, are able to lease customized blue delivery vans with the Amazon smile logo on the side, and take advantage of other discounts, including fuel, insurance, branded uniforms and more.

Before the launch of the partner program, Amazon had relied on its Amazon Flex crowdsourced workforce to help it deliver packages to help it reduce costs. But these gig workers often faced too much uncertainty with regard to their pay because of things like fluctuating gas prices that cut into profits, lack of insurance and the general logistical challenges that come from trying to deliver packages from a smaller, unbranded personal vehicle.

Delivery partners, meanwhile, could earn as much as $300,000 in annual profit by growing their fleet to 40 vehicles, Amazon claims. The company said last year it expected that hundreds of small business owners will come to hire tens of thousands of drivers across the U.S.

That is already happening. Since the launch of the program in June 2018, more than 200 small businesses have hired “thousands” of local drivers, Amazon says this morning. It expects to add hundreds more small businesses this year, as well.

The incentive to employees also comes at a time when Amazon is increasing automation in its warehouses that will potentially put some workers out of jobs. A report from Reuters this morning noted that Amazon is rolling out machines that will automate a job that’s currently held by thousands of workers: boxing customer orders. Some of these workers could be candidates for the delivery partner program now, given they may be looking for what’s next — before they’re laid off.

For Amazon, the funds it’s investing today to help employees transition to this new business could be recouped over time as the retailer reduces its reliance on USPS, UPS and FedEx by shifting more of its business over to its own delivery network where it has control. In the near-term, however, all of Amazon’s delivery partners will benefit from its plans to spend $800 million to make one-day shipping the new Prime default.

The employee incentives are available in the U.S., the U.K. and Spain.