Virtual reality is the ultimate money pit. Tech giants are selling low-margin hardware on which users play software that was funded by those same companies. This strategy seems to continue year after year without a hockey stick chart in sight.

While VR may still be waiting for its breakout hardware hit, there has already been a clear software standout. Beat Games released Beat Saber one year ago. The popular game is part Guitar Hero, part Fruit Ninja, and it utilizes the benefits of VR to let players slice their way through an EDM soundtrack, which the company’s music-mixing CEO produced.

While a few VR studios have surpassed lifetime revenue in the low millions, Beat Games sold more than 1 million copies of the $20 game after just nine months on the market. The title’s addicting gameplay has left it endlessly showcased across the web by game streamers, enabling a mainstream success that the VR market really hasn’t seen yet.

Beat Games CEO Jaroslav Beck says the title’s success is “dope,” but he’s more concerned with ensuring he doesn’t leave anything on the table, whether that’s expansion into esports or arcades or the fitness market. I chatted with Beck about what it means to actually finish a game in the era of freemium, why he doesn’t want to become a manager and how Beat Games has never raised VC funding.

Beck didn’t come up with the idea for Beat Saber. Like a lot of people who have bought the game, his first experience with it was watching an early demo on the web built by a couple of tinkering Czech programmers.

Ján Ilavský and Vladimír Hrinčár had been building games together since high school. The pair had published a few games; their biggest success was Chameleon Run, a mobile game that won an Apple Design Award in 2016. Following that success, the duo set its sights on building something for virtual reality. 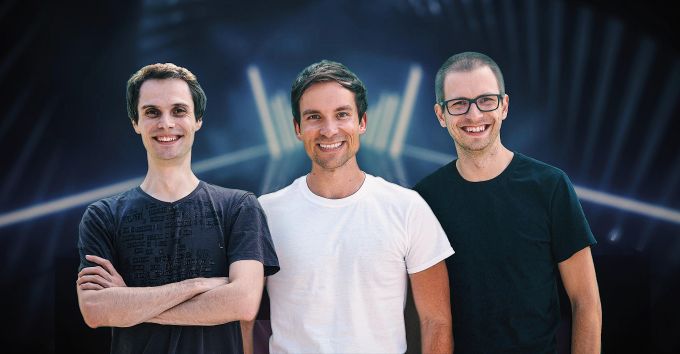 They were already a year into development when Beck saw a demo on Facebook. At the time, Beck had been living in L.A. building out customers for his own studio, Epic Music Productions, where he had already done some work for clients like EA, Blizzard and Disney. Despite thinking the VR market might be a passing fad, the Beat Saber demo piqued his interest and led him to more online investigating.

“I was so skeptical, but then I saw the teaser that these two had put out and it was like something had unlocked my head,” Beck told TechCrunch.

After discovering the pair shared his Czech background, he contacted them and flew out to Prague to convince them to let him build the soundtrack for their new game. He also planted the idea of starting a new company around the title if it achieved the success that he thought it would.

Convincing the “strict programmers” to build a venture around their demo was more challenging than expected, he admits, but Beck eventually got them on board to finish the game. The team of perfectionists had a tougher time hitting their deadlines than expected, and even after releasing an “early access version” of the title a year ago, Beck still talks about finishing the game as though it’s a far-flung dream. This, despite the fact that Beat Saber is one of the most-downloaded games in VR’s early history. 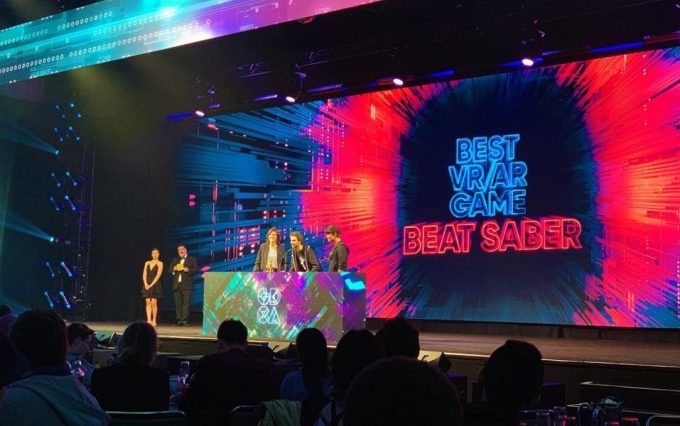 How the team reached this achievement requires dissecting the qualities of a viral game, which is no small task. Beck thinks the game was successful simply because Ján and Vladimír built the type of game they wanted to play without ever worrying about building a commercial hit.

But for a medium that’s been so difficult to showcase without putting on a headset, the Beat Saber team set out early on to ensure the game was highly visible. Because many of the songs were Beck’s, it was much simpler to ensure that YouTubers could freely post footage of the gameplay without concerns for takedowns or reduced monetization. It worked; it wasn’t long after the game’s release that top streamers like PewDiePie and Jacksepticeye were playing the game for their massive subscriber bases.

Beck says that videos showcasing the game on YouTube have now received more than 2 billion views. That popularity has gradually expanded offline, with plenty of gamers that I’ve chatted with saying the viral Beat Saber videos led them to get VR systems in the first place.

Oculus has been using Beat Saber as a way to benchmark the quality of its new inside-out tracking system, ensuring that the new headsets can handle the game’s most advanced modes.

My little bit from the F8 keynote. @BeatSaber really was the most important benchmark for tracking, from my point of view! pic.twitter.com/ZXikUj9gOI

“Our tracking team continued to improve their technology until we could play Expert+ songs and achieve the sorts of scores we see on Rift,” Oculus director of ecosystem Chris Pruett told TechCrunch. “Beat Saber proved to be a very valuable bar against which we have been able to measure our overall tracking quality.”

Beck similarly says that one of Valve’s recent code updates for its SteamVR tracking system was made specifically to account for the tracking needs of Beat Saber’s fastest players.

After smashing through VR sales records, one of Beat Games’ biggest challenges might be ensuring that the platform’s limited reach doesn’t end up stifling its own growth.

The company is already working on some of its own hardware after partnering with South Korea’s SKonec to build custom VR arcade machines so that players in Asia can try out the title without having to fully buy-in to virtual reality. 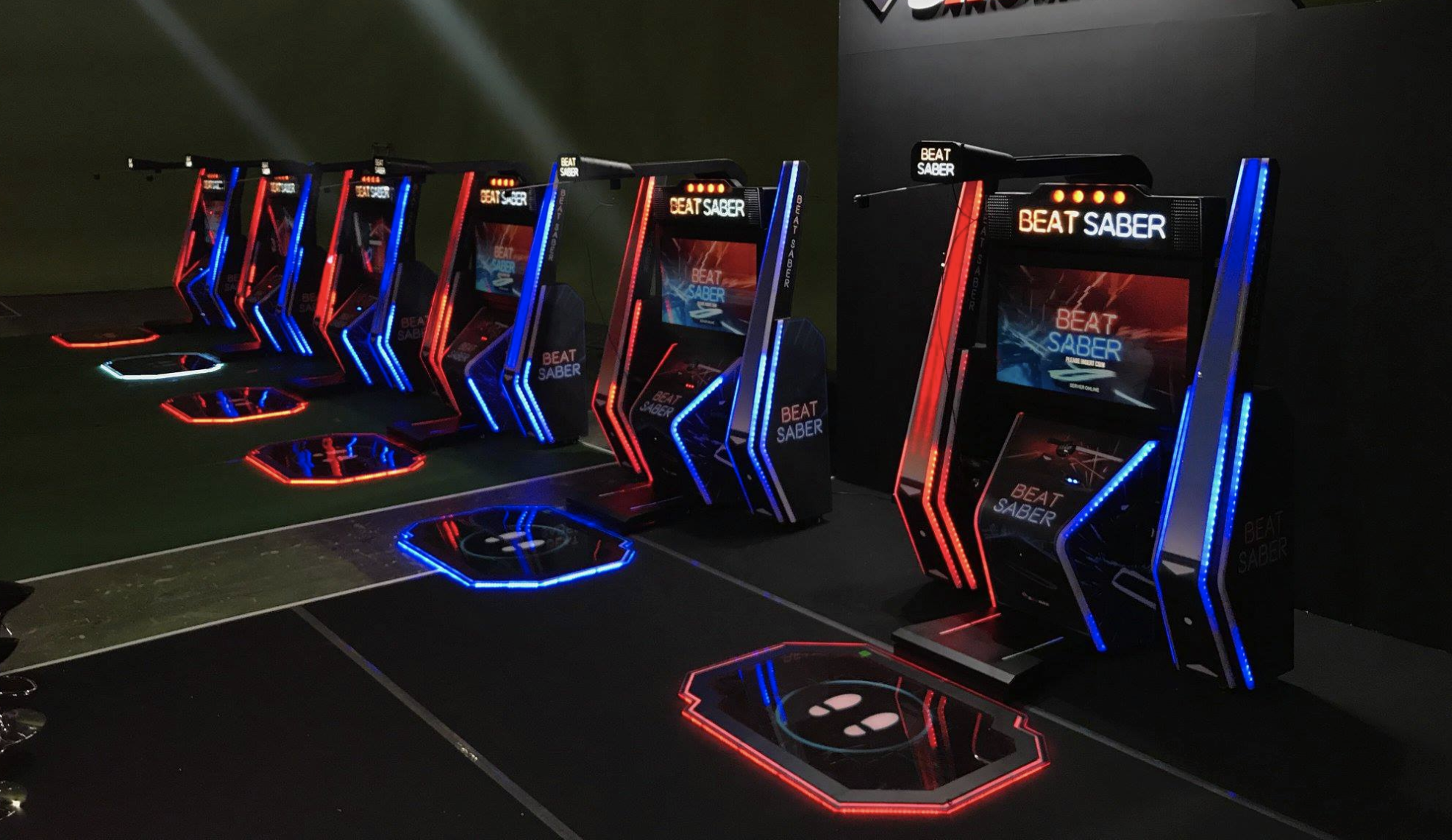 “…The most interesting data point for me is that Beat Saber sold over one million copies in a year and is making over $20 million in revenue,” Tipatat Chennavasin, a co-founder of The VR Fund and an advisor to Beat Games, told TechCrunch in an email interview. “That makes it not just the biggest VR games success story but also the biggest indie games success story on any platform of the past year. Angry Bird’s success on iOS helped legitimize smartphones as a gaming platform when it made $6 million in one year.”

Finding the widest audience has led the Beat Games team to ensure that their code is lean and that the game “could run on a washing machine” if it needed to, Beck says. Even optimizing the game has been intensive work for the small team. Despite having such a hot title, Beck and his co-founders aren’t racing to turn their endeavor into an empire. In the past year, they’ve grown to just eight full-time employees.

“It’s complicated because we don’t really want to scale that much because then we’ll just become managers of a huge team,” he says. “We created the game and we want to be the ones to finish it.”

In an industry seemingly filled with investments that didn’t live up to the industry’s hype, Beat Games has never received outside funding.

“I’m really proud that we were able to build the company with this mindset of making decisions based on what is good for the game and not what is the most profitable thing,” he says. “I think the worst thing for a developer is that you get this awesome idea that you’re super excited about and then investors tell you, ‘Yeah that’s cool, but we’ll be broke.’ Then it’s like, what’s the point? You didn’t start making these games just to become crazy rich, right?”

“I’m not saying we will never raise funding, though,” he quickly adds.

Beck says that the team has some ideas for follow-on titles for Beat Games, but that completing their first effort is the studio’s central priority. Finishing Beat Saber seems like it should be well within the team’s reach, but Beck seems to see “finishing” the game as a nebulous task better defined by what’s left on the table rather than what they actually ship.

“Finishing the game isn’t about just bringing in all of these new features, but it’s about capturing the full potential of the game, whether that’s in esports, fitness or in just exploring music,” Beck says. “That’s a lot of work… the question is if we will survive until then (laughs), but I sure hope that we do.”