In its first-ever earnings report as a public company, Lyft (Nasdaq: LYFT) failed to display progress toward profitability.

The ride-hailing business, which raised $2 billion in a March initial public offering, posted first-quarter revenues of $776 million on losses of $1.14 billion, including $894 million of stock-based compensation and related payroll tax expenses. The company’s revenues surpassed Wall Street estimates of $740 million while losses came in much higher as a result of IPO-related expenses.

“The first quarter was a strong start to an important year, our first as a public company,” Lyft co-founder and chief executive officer Logan Green said in a statement. “Our performance was driven by the increased demand for our network and multi-modal platform, as Active Riders grew 46 percent and revenue grew 95 percent year-over-year. Transportation is one of the largest segments of our economy and we are still in the very early stages of an enormous secular shift from personal car ownership to Transportation-as-a-Service.” 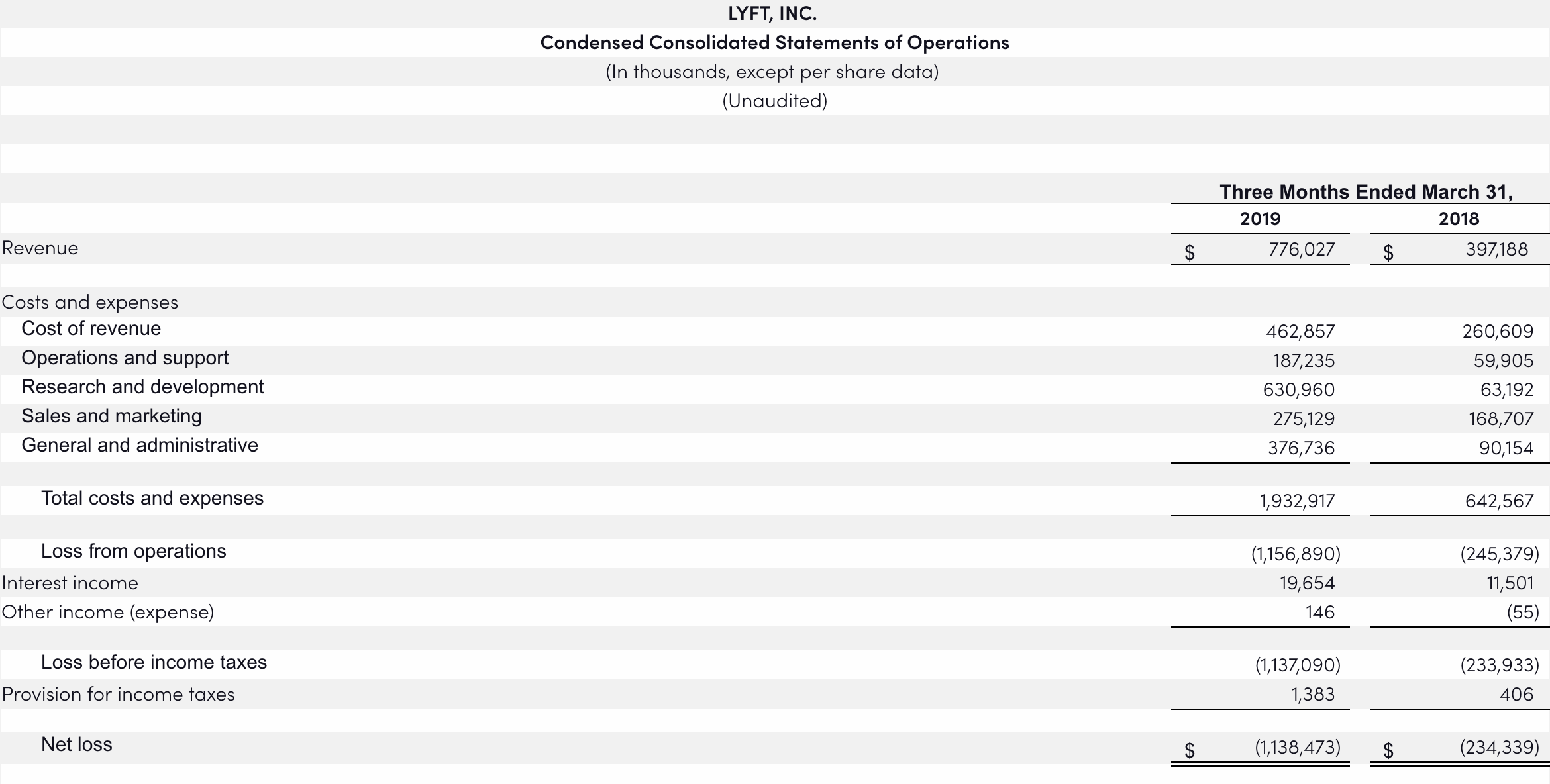 Lyft was the first of a cohort of venture-backed “unicorns,” including Pinterest, Zoom and soon, Uber — which will make its long-overdue debut on the New York Stock Exchange later this week — to complete a public offering in 2019. Despite a sizeable IPO pop, Lyft shares have sunk since its first appearance on the Nasdaq. Lyft hit a share price of $87 on its first day of trading, up from a $74 IPO price. However, in the weeks post-IPO it’s floated closer to the $60 mark, closing Tuesday down 2% at $59.41 per share.

Lyft has never posted a profit and its founders John Zimmer and Green have made it clear they expect to invest in the company’s growth for the next several years as it expands its multimodal offerings and ultimately launches operations overseas.

“The road ahead represents a massive opportunity to serve our communities and drive value for our stockholders,” Lyft’s co-founders wrote in the company’s IPO prospectus. “We take this responsibility to serve our communities and stockholders seriously, and we look forward to proving that with actions and results. If we told you we were building the world’s best canal, railroad or highway infrastructure, you’d understand that this would take time. In that same light, the opportunity ahead requires continued long-term thinking, focus and execution.”

Given Lyft’s unprofitable history, analysts are likely keeping a watchful eye on top-line revenue, active riders and revenue per rider. According to its earnings report, Lyft’s revenue per active rider has grown 34% year-over-year, to $37.86, while active riders, generally, expanded nearly 50% to 20.5 million.

The earnings report comes just three days before Uber is expected to begin trading on the NYSE. The company is set to price between $44 and $50 per share for a fully diluted market cap of about $90 billion if it prices at the high end. Selling 180 million common shares, Uber plans to raise between $7.9 billion and $9 billion, 4x that of Lyft’s IPO bounty.

Given Lyft’s performance on the stock exchange, investors are likely hesitant to go all-in on Uber’s offering. Reports indicate that Uber slashed targets ahead of its IPO, citing Lyft’s stock nose-dive, with Uber executives “eager to avoid the pitfalls that sunk” Lyft, according to The Wall Street Journal.

In addition to releasing its first-ever earnings report, Lyft also announced a partnership with Alphabet’s Waymo, the self-driving vehicle juggernaut. As part of the new deal, Waymo will deploy 10 of its vehicles on Lyft over the next few months in the Phoenix area.

The partnership is a bit of a slap in the face to Uber, which just like Lyft is backed by Alphabet.

Uber and Lyft drivers are striking ahead of Uber’s IPO