The online advertising business continues to grow at double-digit rates, according to the latest report from the Interactive Advertising Bureau (a trade group for online advertisers and publishers).

According to the report, which was prepared for the IAB by PricewaterhouseCoopers, digital ad revenue in the U.S. reached $49.5 billion in the first half of 2018, up 23 percent year-over-year. And more of those ad dollars are shifting to mobile, which accounted for 63 percent of the total, compared to 54 percent during the same period last year.

“We’re really looking at that as advertisers catching up to consumer behavior,” said Sue Hogan, the IAB’s senior vice president of research and measurement.

PwC U.S. partner David Silverman suggested that the growth of mobile commerce and direct-to-consumer brands are also playing a big role, with new technologies giving digital advertisers “the ability to efficiently and effectively target consumers who are likely to be interested in a purchase, driving the cost of acquiring that customer down.”

“You can then plow that profit back into your business … the digital advertising market is helping to fuel that growth,” Silverman said. 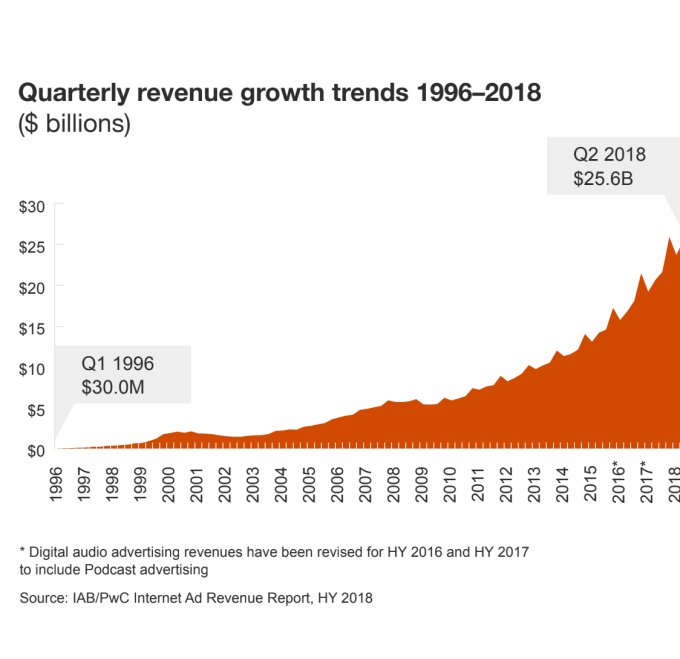 Although the IAB report is only focused on ad spend in the United States, many U.S. companies are likely affected by GDPR regulations in Europe — one recent study suggested that the regulations have reduced ad tracking in Europe while helping Google. When I brought this up, Silverman said there hasn’t been a big impact in the numbers thus far. (GDPR took effect in May.)

“I do believe this is one of the headwinds that the industry will be facing and we will need to have response to those challenges,” he said. “But we have not, to date, seen a major impact on growth.”