At its I/O developer conference, Google today announced that it is bringing the camera — and augmented reality — to Google Search. As the company demonstrated, you could search for something like “great white shark” and then see it in front of you through your phone’s camera. The company showed similar examples with a 3D model of the human muscular system.

It’s unclear how many of these 3D models will appear in search. It’s also unclear whether publishers will be able to create their own, but we expect to hear more about this later today. 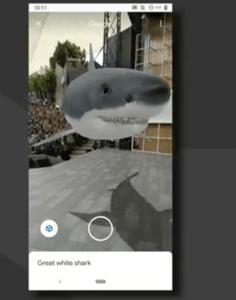 “We are moving from a company that helps you find answers to a company that gets things done,” Google CEO Sundar Pichai said. “Our goal is to build a more helpful Google for everyone.”

That starts with Search, Pichai said, and this is a new example for this. It’s somewhat gimmicky, but also pretty cool, given that you can easily go from a search term to an AR experience in the Google app.