As Uber gears up for an IPO, one of its smaller rivals has raised some money as it prepares to take its own turn on the public market. Gett — the ride-hailing startup that focuses primarily on the business market, currently in Israel, the UK, Russia and New York — has picked up $200 million in a mix of debt and equity at a post-money valuation of $1.5 billion. Gett’s founder and CEO Dave Waiser said in an interview that this will likely be the last round the company takes before an IPO by Q1 of 2020.

He also projects that the company will be operationally profitable — Ebitda positive and breakeven — by the end of this year.

“We are still thinking about the venue,” he said of the IPO. “It might be London, or it might be New York.”

(Gett talked about an IPO earlier this year as well; the 2020 date Waiser mentioned to me is later than what was previously reported, as is the target for when it would become profitable, which had originally been projected to happen by the beginning of this year.)

This latest round of funding — which would bring Israel-based Gett’s total raised to $790 million — comes from all of the company’s existing investors. These include carmaker VW, Access and its founder Len Blavatnik, Kreos, MCI and more. It is an extension and closing of the round that we reported back in June 2018 at a $1.4 billion valuation: the expansion to $200 million from $80 million is why the valuation has also gone up.

With operations in cities across just four countries — the UK (where in contrast to Uber it provides a service for London’s traditional black cab drivers to pick up in-app rides to complement classic on-street hailing), Russia, Israel and New York in the US — Gett’s pared-down approach is overshadowed by Lyft in the US and Uber globally in terms of size. But the latter two companies’ growth stories come with massive losses: Uber’s racked up $1 billion in losses in just the previous quarter, for example. That’s one reason why Waiser believes that Gett’s proposition to the market remains a unique and compelling one.

“A year ago, profitability was not a very popular topic,” he said. “In Uber and Lyft we see two great companies, but even as they grow revenues, their losses are growing. What is really unique for Gett is that our success, and our improvements in revenues, are in parallel with our Ebitda improving.” As Gett itself gears up to go public, it’s also releasing more figures, which mark this as a three-year trend: 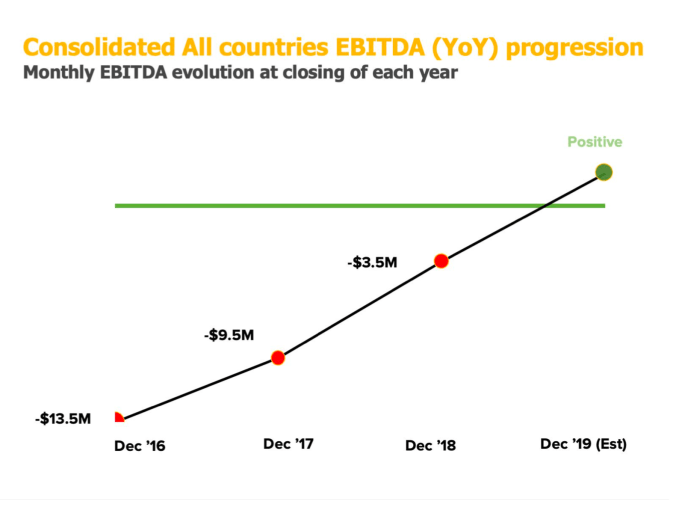 Within its smaller footprint, meanwhile, Gett is less intent on being “number-one” as it is about continuing to see traction and usage from the higher-end customers that it targets. Waiser declined to provide any numbers to me on total number of rides or drivers, which is not a surprise, since these metrics would easily look tiny compared to numbers from its bigger rivals.

But he notes that as of Q4 2018, Get Business Solutions had 20,000 companies on its books, up 63 percent on a year before; and that the New York business, branded as Juno, remains a “solid number three.”

There have been various rumors swirling about the company over the last several months, so I took the opportunity of this fundraise to ask Waiser about some of them.

Last December, the German media reported that Volkswagen was preparing to write down $300 million of its Gett investment in an increasingly competitive market in Gett’s wheelhouse, where it is not the only one targeting corporates and other business users. Waiser described the report as “bad journalism.”

“There were no audit reports to support those claims, and it was damaging to report that,” he said, pointing out also that VW participating in this round is a mark of its ongoing support.

Some months before the VW rumor, it was reported that Gett was looking to sell off Juno, the ride-hailing service that it acquired in 2017 for $200 million, to move out of the US market. Waiser dismissed this report, too:

“There is no plan to sell Juno,” he stated, noting that the US — which is essentially only New York right now — has been a crucial part of the company’s growth story. “It’s the only player in the US that might become national while remaining financially disciplined.” He added that Juno has been one of the strongest performers within the Gett footprint, “already contribution margin positive.”

However, when I asked him if that is just as likely to be a sales pitch to a prospective buyer as it is his own description of the company today, he declined to answer specifically. His response does leave the door open for different outcomes.

“I don’t want to say anything that will come across as speculation,” he said. “The business right now looks different from Uber’s and Lyft’s, and that gives options to us and others about the US opportunity.”