Microsoft’s quantum computer may not have a working qubit yet, but the company has been hard at work on building the tools to program future quantum computers. Over the course of the last few years, the company announced both Q#, a programming language for writing quantum code and a compiler for this language, as well as a quantum simulator. Today, Microsoft announced that it will open-source these efforts in the coming months. 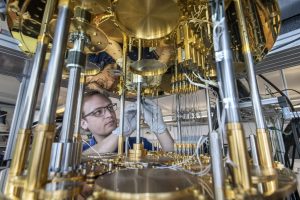 This move, the company says, is meant to make “quantum computing and algorithm development easier and more transparent for developers.” In addition, it will make it easier for academic institutions to use these tools, and developers, of course, will be able to contribute their own code and ideas.

Unsurprisingly, the code will live on Microsoft’s GitHub page. Previously, the team had already open-sourced a number of tools and examples, as well as a library of quantum chemistry samples, but this is the first time the team is open-sourcing core parts of the platform.

“Our approach to solving intractable industry problems requires new types of scalable software tools, and the Quantum Development Kit offers that and supports us in every step of our development process,” said Andrew Fursman, co-founder and CEO of 1QBit, in today’s announcement. “We’re excited to contribute two important code samples to accelerate advanced materials and quantum chemistry research, including one focusing on Variational-Quantum-Eigensolver (VQE) and another which demonstrates density matrix embedding theory (DMET) running on our platform, QEMIST.”

It’s not the first company to do so, though. IBM, for example, offers Qiskit, an open-source framework for building quantum computing programs, including the Aer simulator. Rigetti Computing, too, has open-sourced many of its tools.

Only about a month ago, Microsoft also announced that the Development Kit has been downloaded more than 100,000 times. At the time, it also brought support for Q# programming to Jupyter notebooks.

While all these software efforts are laudable, though, Microsoft’s quantum hardware efforts have yet to pay off. The company is taking a novel approach to quantum computing, which may yet give it a lead over its competitors in the long run. In the short term, though, some of its competitors are already making real, physical — but limited — quantum computers available to developers.