Facebook just announced a new round of controversial accounts that will be kicked off the platform for violating its rules. In this instance, Facebook cited its policy against “dangerous individuals and organizations” to bring the ban hammer down on Milo Yiannopoulos, Paul Joseph Watson, Laura Loomer, Paul Nehlen and Louis Farrakhan. The company also doubled down on its position toward Alex Jones and his popular conspiracy website Infowars.

“We’ve always banned individuals or organizations that promote or engage in violence and hate, regardless of ideology,” a Facebook spokesperson told TechCrunch via email. “The process for evaluating potential violators is extensive and it is what led us to our decision to remove these accounts today.”

While most people in that cluster of names are far-right media figures, Farrakhan is best known for leading the Nation of Islam and has faced ongoing criticism for anti-Semitism. Nehlen is a fringe political figure who ran against Paul Ryan in 2018 while openly espousing white supremacist views. 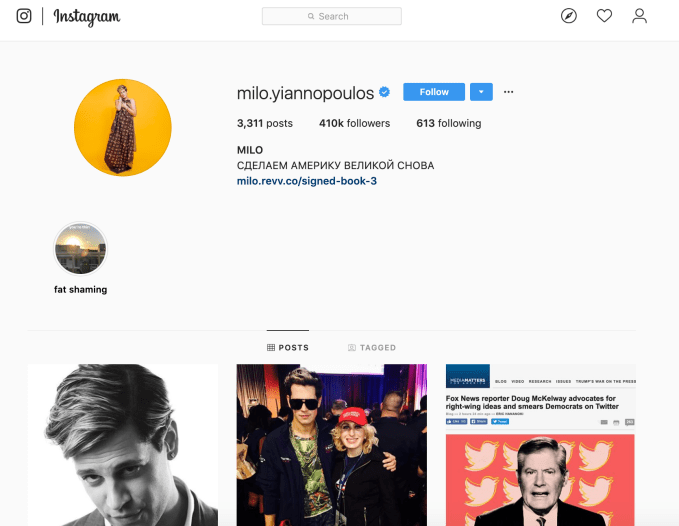 Beyond just banning these accounts, Facebook will restrict content from other users that promotes banned figures if they are linked to hate groups or known to incite violence. The company will not take this more comprehensive approach to accounts that don’t meet this threshold. We’ve reached out to Facebook for clarification on which figures fall into each camp. Update: None of the names from today meet Facebook’s criteria and content promoting all of these figures will still be allowed.

At the time of writing, some of the accounts banned today appeared to still be online and accessible, including an Instagram account belonging to Yiannopoulos. Some of the names on Facebook’s new ban list were previously banned on other mainstream platforms. Following the ban, Paul Watson leveraged his Twitter account to protest the company’s actions. “The media was tipped off an hour before Facebook banned me,” Watson tweeted. “They’re in cahoots.”

Facebook previously announced a ban for Jones in 2018 and again did a sweep for accounts linked to Jones in February. In spite of the Facebook ban, Jones was allowed to maintain his presence on Instagram due to the fact that less than 30% of his content violated the platform’s rules.