Facebook has bet a lot on its VR dream. The industry has become the butt of a few jokes in the past couple of years as hype has deflated, but there’s been no question that the tech is interesting — the question has been whether it’s sustainably cool. Oculus made a gamble on the high-end three years ago, but the $399 standalone Quest is where they see whether that bet was worth it.

In a lot of ways, this is a VR headset built in the spirit of the Nintendo Switch.* Performance is secondary to the depth of user experience and ease of use. It’s vastly easier to get this out of the box and start playing with tracked VR than any other VR headset I’ve used; it takes minutes the first time you take it out of the box and seconds in subsequent uses. 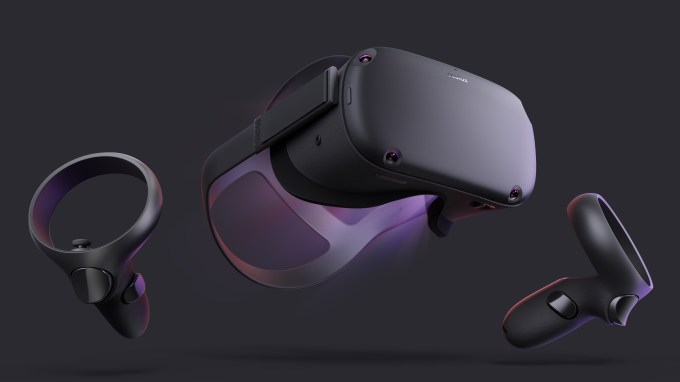 How does it feel?

The Insight tracking system does well for the most part; it’s the only choice for a standalone headset, so there’s no point comparing it to the fidelity of outside-in tracking systems. It performs well and the headset-tracking was was generally flawless; the controller-tracking was a bit more mixed as the cameras frequently lost sight of the controllers during gameplay.

There are some cool little things that this tracking system integrates, like shifting to a passthrough camera when you walk outside of your Guardian safe space so you have a sense of where you are.

The performance of the mobile chipset certainly doesn’t offer a PC experience, but the user experience has been fine-tuned so well that you forgive its shortcomings. Oculus certainly seems to get the most of the Snapdragon 835, which powers the headset, but Rift users will realize within 10 seconds that this is a lower class of device, even if some of the titles are the same. That’s not to say that the experiences look bad, but expectations that Oculus eked desktop performance out of the chipset that powered the Galaxy S8 should be heavily tempered. There are more than 50 titles in the Quest store at launch. I got access to a handful, including favorites like Beat Saber and Superhot VR. Oculus has a great line-up. The games may offer less fidelity in detail but they feel full-featured all the same.

The display and optics are adequate, though things aren’t as crisp as one might hope — the pixel layout falls victim to the “screen-door effect,” where you can basically see the space between pixels quite clearly. This isn’t the case with even the budget Oculus Go.

The battery life is better than I was expecting. Oculus says you can expect about two hours of heavy gaming and three hours of media watching; this seems to be a conservative estimate based on my experience. This is still a machine that you leave plugged in at all times in-between uses; using it while tethered to an external battery pack isn’t the worst, though.

The headset may not be the most powerful, but it is doubtlessly the new flagship VR product from Facebook. The company outsourced design of its PC-powered Rift S headset to Lenovo because the high-end isn’t where Oculus needs to find new customers; the Quest is a bet on going mainstream, and from my experience, it seems to be a worthwhile bet.