New Enterprise Associates, the 42-year-old venture capital firm, has invested in the $23 million Series B round for Mejuri, a startup capturing millennial women’s penchant for affordable and treat yo’ self type of jewelry rather than diamonds and precious stones for special occasions.

Traditional jewelry, the startup points out, targets men for gifting and makes higher markups acceptable. With its D2C play, Mejuri believes it’s putting the purchasing decision back with women; indeed, it found 75 percent of its customers are buying for themselves. Its team of 120 employees, including an in-house crew of 25 people, is constantly on the watch for trends and consumer feedback, a strategy made possible by its online presence of more than 422,000 Instagram followers. Instead of releasing large batches of seasonal pieces, Mejuri adapts the so-called “drop” model that introduces only a small quantity of products each week, which allows it to timely translate customer sentiments into designs.

“Mejuri’s mission really hits home for me,” said NEA partner Vanessa Larco in a statement. “I noticed a shift in trends when none of my friends wanted to go to any of the traditional fine jewelry companies to purchase jewelry anymore, and I realized a lot of those big brands were in trouble.”

Natalie Massenet, founder of Net-a-Porter and partner at Imaginary, another venture fund that participated in Mejuri’s Series B, said the startup is set to “disrupt” the jewelry industry through supply chain standards that modern consumers demand, “like sourcing from conflict-free and socially responsible diamond suppliers and maintaining affordable prices to serve a consumer who is buying for herself and her friends.” 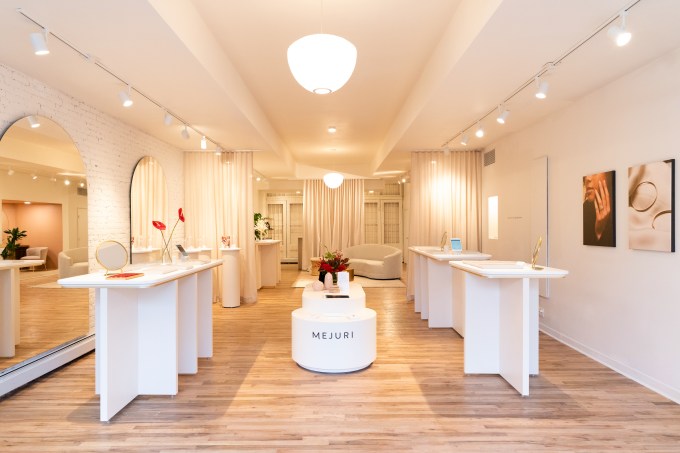 Another enabling factor is the company’s female-led team: 80 percent of the staff are women, headed by founder Noura Sakkijha, a third-generation jeweler and a former industrial engineer who scored the company’s latest capital when she was seven months pregnant with two twins. It wasn’t an easy route, but the fact that Sakkijha was visibly pregnant also paved her way for finding the right partners.

“I was nervous about how people would perceive me,” Sakkijha told TechCrunch. “If you have an issue with a pregnant, female CEO–Mejuri is not for you. My kids will always be a priority and part of the story. Knowing this left me feeling more vulnerable–but also liberated. It’s also introduced me to an amazing community; I’ve met so many amazing female investors and founders whose humor and shared experiences have been a huge relief. Seeing other women model that you can have both–not perfectly, not effortlessly–was a relief that I didn’t have to sacrifice my drive for motherhood.”

The user-centric focus has brought customer loyalty to Mejuri. The startup claims that 30 percent of its monthly transactions come from returning shoppers, and 70,000 customers are on the waitlist for its products. It’s accumulated a total of 20 million visitors to its website and released 1,500 designs since launch. Revenues have quadrupled year-over-year for the fourth consecutive year, and the company, one of TechCrunch’s favorite picks from 500 Startups’ Batch 15 Demo Day three years ago, said it’s on track to achieve the same level of traction in 2019.

The new proceeds bring Mejuri’s total funds raised to more than $29 million to date. Others in the new funding round include follow-on backers Felix Capital, BDC Capital, Incite Ventures and Dash Ventures. The company plans to spend its latest financial injection on offline expansion, push beyond its biggest markets Canada and the United States as well as the 33 countries it ships to, and investment in branding and customer experience.

The original story was updated with quotes from Sakkijha and other details of the business.