Reese Witherspoon’s media company Hello Sunshine already has its hands in movies, television, Apple TV+ shows, podcasts, Audible originals, books and more. Now it’s weighing an entry into the subscription box business to further capitalize on its brand and its appeal to women.

The subscription boxes under consideration would operate out of Reese’s Book Club — the curated selection of book recommendations whose focus is on titles with strong female leads. The club, which some believe may one day rival Oprah’s, is already capable of driving sales at Amazon and elsewhere. It’s also now a feeder into other Hello Sunshine projects — like HBO’s “Big Little Lies,” Hulu’s upcoming adaptation of “Little Fires Everywhere” and others.

Now the company is gathering feedback as to how to turn the book club’s online brand — which began with Witherspoon posting books to Instagram — into a revenue-generating business of its own.

Hello Sunshine members recently received a survey asking for their feedback about Hello Sunshine and Reese’s Book Club. But the questions it posed were almost entirely focused on gathering information about what members would want to see in a subscription box.

For example, would they prefer items that are seasonal, themed to the book club’s current pick or those that  are related to reading — like book lamps and bookmarks? Or would members be open to anything Reese just likes herself, for whatever reason? 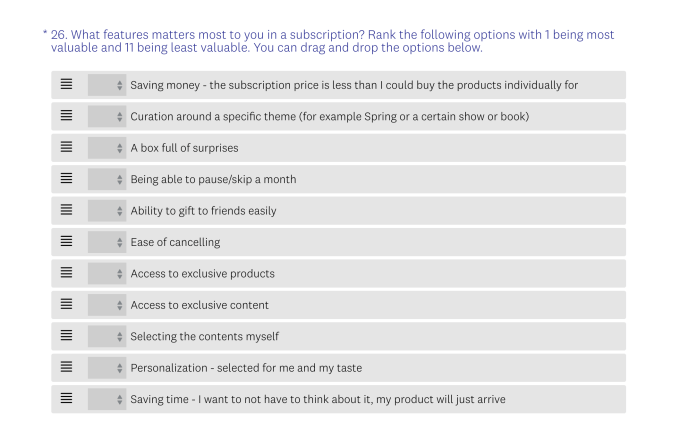 To some extent, Hello Sunshine has already begun the process of curating other non-book items through the site’s online shop, where it features things like totes, mugs, pins, hats, notebooks, makeup bags and even jewelry. These could easily be added into subscription boxes, if the time comes.

The survey also asked for feedback about how the books would be paired with the other items. Members were asked if they would prefer the monthly book club selection or themed boxes like “favorite books,” “classics” or “summer reads,” for example.

Finally, the survey asked about how customers would like to pay — monthly, quarterly, annually and so on.

While the larger subscription box craze may have passed, many that have a more female-friendly focus are still surviving — like Birchbox and Ipsy’s makeup boxes, jewelry focused Rocksbox, FabFitFun and others. And some are even thriving — like Stitch Fix’s personalized clothing boxes.

Hello Sunshine’s potential in this space would instead come from its growing fan base, rather than something it has to start from scratch. Today the book club has 1 million Instagram followers, up from 390,000 a year ago. That’s in addition to the 471,000 who follow Hello Sunshine and the 17.3 million who follow Witherspoon.