Alibaba’s arch-foe JD.com has long prided itself on owning and controlling its logistics services: couriers are treated as in-house staff and paid a basic income. But that will end soon as costs keep piling up for the e-commerce giant.

In an internal letter sent to the staff on Monday, JD founder and chief executive Richard Liu said the company will scrap basic salary for couriers as net loss amounted to 2.8 billion yuan ($420 million) in 2018 at JD’s logistics unit.

“The main reason is we had too few orders externally and too high a cost internally,” said Liu. “You all know that the last two years have been quite difficult for the company. We have been in the loss for more than ten years. If losses continue, JD Logistics only has two years of runway left with its capital raised.”

“I don’t think any of our delivery brothers want the company to go bankrupt,” Liu added.

JD Logistics became a standalone business in 2017 and subsequently raised billions of dollars from investors. JD still owns an 81.4 percent stake in the logistics arm, which was valued at around $13.5 billion at the time it raised $2.5 billion in February 2018.

Going forward, JD Logistics will continue to pay social insurances on behalf of its couriers, whose income is now based on the number of packages they handle. Liu assured that the old basic pay accounted for just 10 percent of the delivery staff’s total income so his goal is not to cut but boost salary for them, and eventually for JD Logistics as well.

But couriers are feeling the heat. Monthly pay used to average 7,000 yuan ($1,043) to 8,000 yuan, a Shenzhen-based courier told TechCrunch. Under the new scheme, he and his regional colleagues are earning 5,000 yuan to 6,000 yuan. Liu said in the letter that it’s “up to the couriers” to vie for better salaries, but it’s unclear how they can secure more packages in practice. JD said it has no comment on the issues addressed in Liu’s letter.

JD delivery staff are assigned on a regional basis. Assuming the number of parcels that go out of a region stays relatively constant, couriers can’t do much to boost their piecework wage. Already, some couriers have devised cheats that involve mailing parcels to themselves and rejecting them at delivery in order to jack up income, TechCrunch has learned. 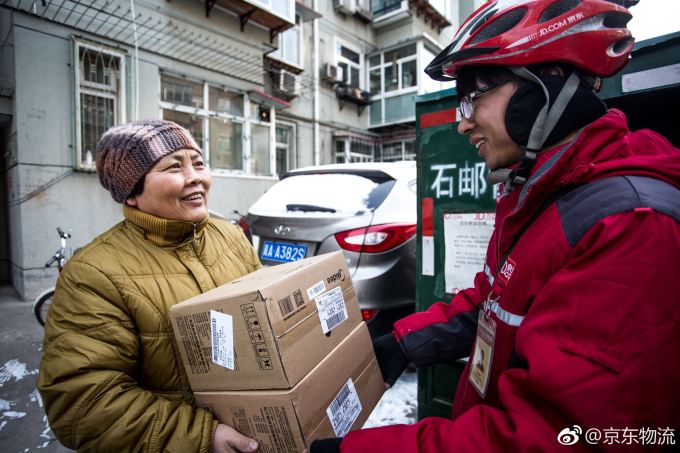 China’s express delivery market, like many other fledgling industries, is a relentless race that sees players offer heavily subsidized prices for customers to stay competitive. JD is going against companies like Alibaba that enlist a consortium of third-party contracted couriers rather than hiring their own to keep costs down.

JD’s fourth-quarter cost of revenues grew 20.7 percent to $16.8 billion, mainly driven by expenses related to logistics services alongside its online direct sales business, the company’s earnings report revealed. The Amazon-like service is finding ways to bulk up revenues by opening its logistics service to third-party clients as well as expanding overseas.

“It’s just a matter of time that JD will remove couriers’ minimum income. It can’t increase the price for customers, so it’s passing the cost to the couriers,” said Alex Cheong, founder and chief executive of Web2Ship, a service that enables price comparisons across different express shipping services, told TechCrunch.

“In China, the only thing [courier companies] can play is the volume game. There’s this mentality that as volume goes up, companies will get more efficient, and costs will lower. But growth is actually slowing,” Cheong warned.

The income restructuring at JD’s logistics arm comes amid a widespread layoff across the parent company to remove low-performers, or what Liu labeled as “slackers.” JD is namechecked as one of China’s internet companies working 9 am to 9 pm, 6 days a week, or “996”, a demanding schedule that has prompted an online protest.

JD denied that it practices the “996” routine though it sees itself as “a competitive workplace that rewards initiative and hard work” which is consistent with its “entrepreneurial roots,” a JD spokesperson told TechCrunch earlier.

The e-commerce titan has long promoted its in-house logistics arm as offering “quality” service, so it remains to see how the removal of basic income will affect couriers’ morale. But one thing is for sure. Under the piece rate system, JD knows its exact labor cost per unit and avoids paying for employees’ idle time.