In China, the laws limit work to 44 hours a week and require overtime pay for anything above that. But many aren’t following the rules, and a rare online movement puts a spotlight on extended work hours in China’s booming tech sector. People from all corners of society have rallied in support for improvements to startup working conditions, while some warn of hurdles in a culture ingrained in the belief that more work leads to greater success.

In late March, anonymous activists introduced 996.ICU, a domain name that represents the grueling life of Chinese programmers: who work from 9 am to 9 pm, 6 days a week with the threat of ending up at ICU, a hospital’s intensive care unit. The site details local labor laws that explicitly prohibit overtime work without pay. The slogan “Developers’ lives matter” appears at the bottom in solemn silence.

A project called 996.ICU soon followed on GitHub, the Microsoft-owned code and tool sharing site. Programmers flocked to air their grievances, compiling a list of Chinese companies that reportedly practice 996 working. Among them were major names like e-commerce leaders Alibaba, JD.com and Pinduoduo, as well as telecoms equipment maker Huawei and Bytedance, the parent company of the red-hot short video app TikTok.

In an email response to TechCrunch, JD claimed it doesn’t force employees to work overtime.

“JD.com is a competitive workplace that rewards initiative and hard work, which is consistent with our entrepreneurial roots. We’re getting back to those roots as we seek, develop and reward staff who share the same hunger and values,” the spokesperson said.

Alibaba declined to comment on the GitHub movement, although founder Jack Ma shared on Weibo Friday his view on the 996 regime.

“No companies should or can force employees into working 996,” wrote Ma. “But young people need to understand that happiness comes from hard work. I don’t defend 996, but I pay my respect to hard workers!” 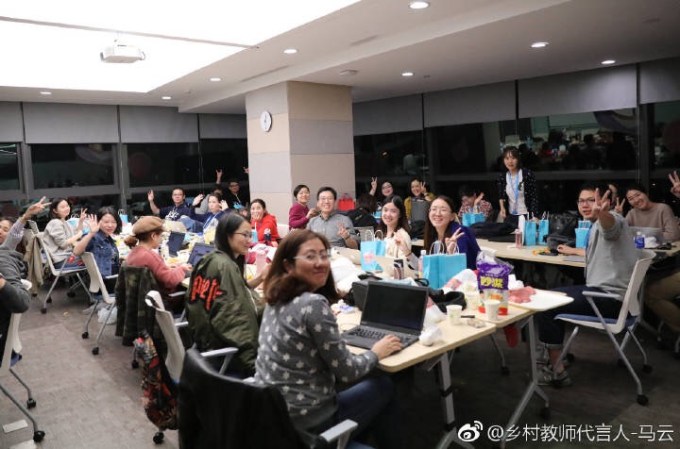 Bytedance declined to comment on whether its employees work 996. We contacted Huawei but had not heard back from the company at the time of writing.

996.ICU rapidly rocketed to be the most-starred project on GitHub, which claims to be the world’s largest host of source codes. The protest certainly turned heads among tech bosses as China-based users soon noticed a number of browsers owned by companies practicing 996 had restricted access to the webpage.

The 996 list is far from exhaustive as it comprises of voluntary entries from GitHub users. It’s also hard to nail down the average work hours at a firm, especially a behemoth with tens of thousands of employees where policies can differ across departments. For instance, it’s widely acknowledged that developers work longer than their peers in other units. Anecdotally, TechCrunch has heard that bosses in some organizations often find ways to exploit loopholes, such as setting unrealistic KPIs without explicitly writing 996 into employee contracts.

“While our company doesn’t force us into 996, sometimes, poor planning from upper management forces us to work long hours to meet arbitrary management deadlines,” a Beijing-based engineer at a professional networking site told TechCrunch. This person is one of many sources who spoke anonymously because they are not authorized to speak to media. 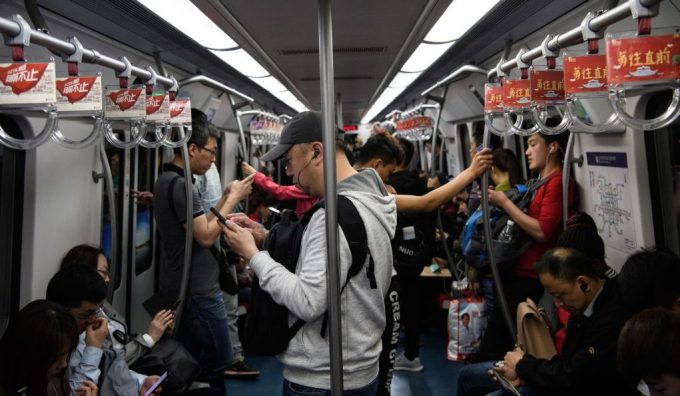 BEIJING, CHINA APRIL 25, 2018: Passenger on a train in the Beijing Subway. Donat Sorokin/TASS (Photo by Donat SorokinTASS via Getty Images)

Other companies are more vocal about 996, taking pride in their excessively diligent culture. Youzan, the Tencent-backed, Shopify-like e-commerce solution provider, explicitly demanded staff to live out 996 work styles. Employees subsequently filed complaints in January to local labor authorities, which were said to have launched an investigation into Youzan.

A lot of companies are like Youzan, which equates long hours of work with success. That mindset can easily lure programmers or other staff into accepting extra work time. But employees are hardly the only ones burning out as entrepreneurs are under even greater pressure to grow the business they build from scratch.

“The recent debate over 996 brings to light the intense competition in China’s tech industry. To survive, startups and large companies have no choice but to work extremely hard. Some renown entrepreneurs even work over 100 hours a week,” Jake Xie, vice president of investment at China Growth Capital, an early-stage venture fund, told TechCrunch.

“Overtime is a norm at many internet companies. If we don’t work more, we fall behind,” said a founder of a Shenzhen-based mobile game developing startup. Competition is particularly cut-throat in China’s mobile gaming sector, where creativity is in short supply and a popular shortcut to success is knocking off an already viral title. Speed, therefore, is all it matters.

Meanwhile, a high-performing culture brewing in China may neutralize society’s resistance to 996. Driven individuals band together at gyms and yoga studios to sweat off stress. Getting group dinners before returning to work every night becomes essential to one’s social life, especially for those that don’t yet have children. 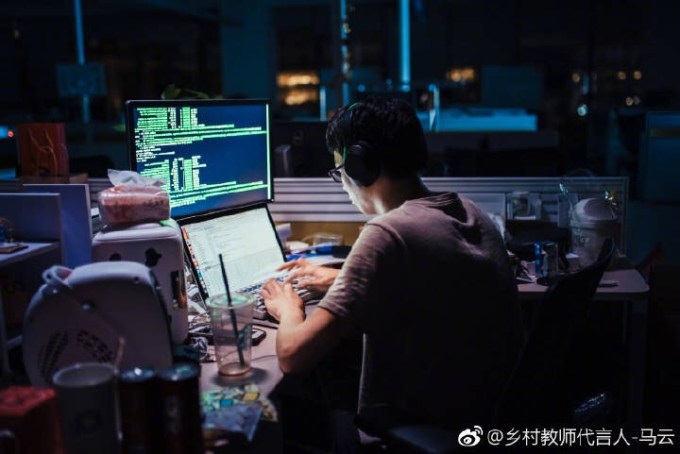 “There is a belief that more hours equals more learning. I think some percentage of people want to put in more hours, and that percentage is highest for 22 to 30 years old,” a Shanghai-based executive at a tech company that values work-life balance told TechCrunch. “A few people in my team have expressed to us that they feel they cannot grow as fast as their friends who are working at companies that practice 996.”

“If you don’t work 996 when you’re young, when will you?” Wrote 54-year-old Jack Ma in his Weibo post. “To this day, I’m definitely working at least 12 to 12, let alone 996… Not everyone practicing 996 has the chance to do things that are valuable and meaningful with a sense of achievement. So I think it’s a blessing for the BATs of China to be able to work 996.”

(BAT is short for Baidu, Alibaba and Tencent for their digital dominance in China, akin to FANNG in the west.)

Demanding hours are certainly not unique to the tech industry. Media and literature have long documented the strenuous work conditions in China’s manufacturing sector. Neighboring Japan is plagued by karoshi or “death from overwork” among its salarymen and Korean companies are also known for imposing back-breaking hours on workers, compelling the government to step in.

Despite those apparent blocks, the anti-996 movement has garnered domestic attention. The trending topic “996ICU gets blocked by large companies” has generated nearly 2,000 posts and 6.3 million views on Weibo. China’s state-run broadcaster CCTV chronicled the incident and accused overtime work of causing “substantial physical and psychological consequences” in employees. Outside China, Python creator Guido van Rossum raised awareness about China’s 996 work routine in a tweet and on a forum.

The 996 work schedule is inhumane. https://t.co/ajXt3YKRAc

The 996 campaign that began as a verbal outcry soon led to material acts. Shanghai-based lawyer Katt Gu and startup founder Suji Yan, who say they aren’t involved in the 996.ICU project, put forward an Anti-996 License that would keep companies in violation of domestic or global labor laws from using its open source software.

But some cautioned the restriction may undermine the spirit of open source, which denotes that a piece of software is distributed free and the source code undergirding it is accessible to others so they can study, share and modify the creator’s work.

Others take a less aggressive approach, applauding companies that embrace the more humane schedule of “9 am to 5 pm for 5 days a week” via the “995.WLB” GitHub project. (WLB is short for “work-life balance.”) On this list are companies like Douban, the book and film review site famous for its “slow” growth but enduring popularity with China’s self-proclaimed hippies. WeWork, the workplace service provider that bills itself as showing respect for employees’ lives outside work, was also nominated.

These are the 15 best US tech companies to work for in 2019, according to Glassdoor

While many nominees on the 996 list appear to be commercially successful, others point to a selection bias in the notion that more work bears greater fruit.

“If a company is large enough and are revealed to be practicing 996, the issue gets more attention. Take Youzan and JD for example,” a Shanghai-based developer at an enterprise software startup told TechCrunch.

“Conversely, a lot of companies that do practice 996 but have not been commercially successful are overlooked. There is no sufficient evidence that shows a company’s growth is linked to 996… What bosses should evaluate is productivity, not hours.”

Or, as some may suggest, managers should get better at incentivizing employees rather than blindingly asking for more hours.

“As long as [China’s] economy doesn’t stall, it may be hard to stop 996 from happening. This is not a problem of the individual. It’s an economic problem. What we can do is offering more humane care and inspiring workers to reflect, ‘Am I working at free will and with passion?’ instead of looking at their work hours,” suggested Xie of China Growth Capital.

While a push towards more disciplined work hours may be slow to come, experts have suggested another area where workers can strive for better treatment.

“It seems almost all startups in China underfund the social security or housing fund especially when they are young, that is, before series A or even series B financing,” Benjamin Qiu, partner at law firm Loeb & Loeb LLP, explained to TechCrunch.

“Compared to 996, the employees have an even stronger legal claim on the above since it violates regulations and financially hurts the employee. That said, the official social credit and housing fund requirement in China appears to be an undue burden on the employer compared to the Silicon Valley, but if complied with, it could be understood as an offset of the 996 culture.”

A number of my interviewees spoke on conditions of anonymity, not because their companies promote 996 but, curiously, because their employers don’t want to become ensnarled in the 996 discussions. “We don’t need to tell people we support work-life balance. We show it with action,” said a spokesperson for one company.