In the past, Roku seemed to be more of a neutral platform compared with streaming media player rivals like Amazon Fire TV or Apple TV. The company gave everyone else’s content equal footing through its add-on channels and in Roku search, as it had nothing of its own to promote. That’s changing with the rollout of Roku OS 9.1, beginning today. The update adds a feature that automatically plays back The Roku Channel’s movies and TV shows at times; another that better showcases the channel’s free content in genre-focused searches; and one that introduces a new navigation menu with offers for other Roku products.

These features arrive alongside other changes, like a new guest mode and easier sign-in to subscriptions.

Among the more innocuous changes are the new guest mode and automatic account linking.

Roku in January first announced an “auto sign out mode,” which allowed guests to sign into subscription channels using their own accounts instead of the Roku owner’s credentials. And guests could specify when their credentials would expire on that device — a useful feature in particular for Airbnb operators. Today, “auto sign out mode” is being rebranded as “guest mode,” and can now be enabled or disabled on select devices. It also now allows Roku owners to sign out the guests themselves.

Meanwhile, Roku is making it easier for customers who move to set up new Roku devices by addressing one of the bigger headaches: logging in again to all your streaming account subscriptions. With Automatic Account Link, Roku users won’t have to re-enter their credentials when activating a new Roku player or Roku TV — the subscription data will simply copy over from their existing account. At launch, this feature is supported on less than 10 subscriptions, including Pandora and Sling TV. But Roku says more are in the works.

More notably are the changes Roku is introducing today that will see it promoting its own content and products to users.

For starters, a change to Roku Search (currently only in the U.S.) is now organizing content more visually.

When users search for a genre like “comedy” or “action,” the content is displayed in a more Netflix-like fashion with larger image thumbnails and rows you scroll through horizontally. However, Roku has decided to organize content by type instead of, say, subsets of “comedy” or “action,” or whatever genre was being searched.

So while a service like Netflix lets you drill down into genres (e.g. Romantic Comedy, Action Comedy, Family Comedy, TV Comedy, etc.), Roku instead is organizing search results by whether the content is free, subscription, on-demand or 4K. 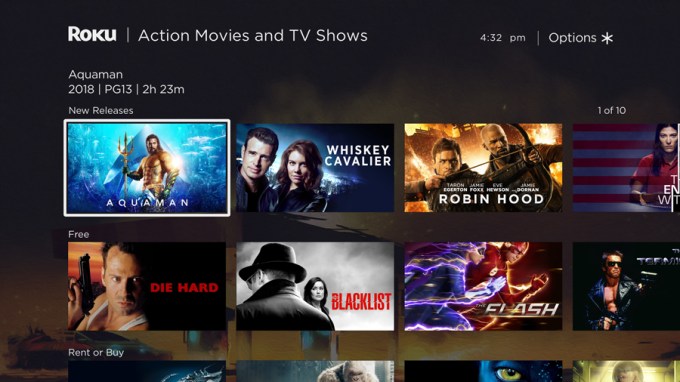 That’s not really an issue — in fact, it can be useful — but it’s worth noting that the second row from the top is “free.” Not surprisingly, this points users to the free, ad-supported content from The Roku Channel alongside other free sources.

That’s similar to how a search for “free” works on Roku today, but Roku OS 9.1 is giving free content more visibility by giving it a prominent spot in the now more visual, genre-based searches, too.

(The search collections – like the one pictured above – are at the top of Roku’s search results when you search for a genre. It’s a subtle way to prioritize Roku’s own content, while giving the appearance of being a useful destination for Roku’s end users. But in reality, someone searching for “action” movies, for example, is more likely trying to figure out what sort of movie to watch, and is less interested in whether the content is free or paid. Sending them to a screen where “free” content is given a top billing is a way to shuffle them over to The Roku Channel.)

With Voice Search, The Roku Channel gets its biggest push yet.

With Roku OS 9.1, when you search for movies and TV shows using your voice, content available on The Roku Channel that matches those results will automatically begin playing in some scenarios. That includes The Roku Channel’s ad-supported fare as well as content from any of the premium subscriptions you have through The Roku Channel.

“Playback will occur when the movie or show is available only in The Roku Channel, or when a customer specifically indicates the channel name in their voice command,” writes Roku, in a blog post.

The company even acknowledges that this product change introduces a bit of favoritism into its previously unbiased search platform.

“If playback from a voice command is not available for a specific movie or show, you’ll continue to see unbiased search results ordered by price, so you can choose the best viewing option,” the company says, detailing how voice search works when The Roku Channel can’t be favored.

It’s not exactly a huge disservice to customers to start playing a title from the only available source for their request. But it is a way to juice views of The Roku Channel content instead of allowing users to choose to rent or buy the title elsewhere.

Today, voice search kicks users over to a search results list where users see all the options for streaming a title, which includes The Roku Channel, when available, as well as places where the movie or show can be purchased or rented. Those who don’t like ads often choose to buy or rent, rather than stream a free, ad-supported version. The 9.1 update makes this choice more difficult because titles autoplay.

Roku says other channels will gain automatic playback in the weeks ahead, which will work best when a customer says the full title and the channel name in the voice command.

Along with autoplaying some voice search results, Roku is adding voice commands: “replay” to go back a few seconds; “turn closed captions on/off; and “turn display off” for Roku TVs that offer the Fast TV Start feature. 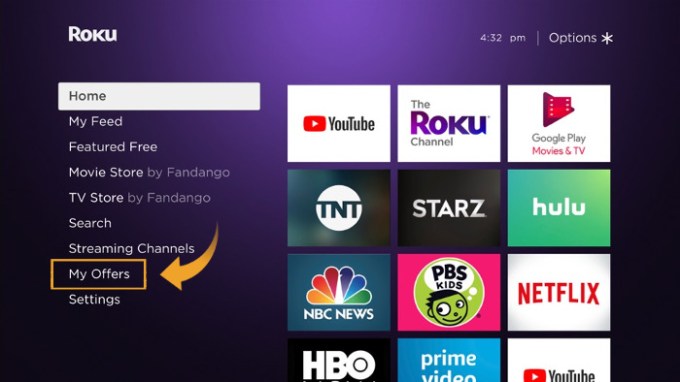 Another Roku OS 9.1 feature will advertise more Roku products to users through a My Offers link that appears in the left navigation menu of the Roku home screen.

Here, users can check to see if they’re eligible for special discounts on Roku products, accessories or — yep, even content subscriptions. The link appears when those personalized discounts are available, and users can make a purchase directly from the ad itself using their remote. 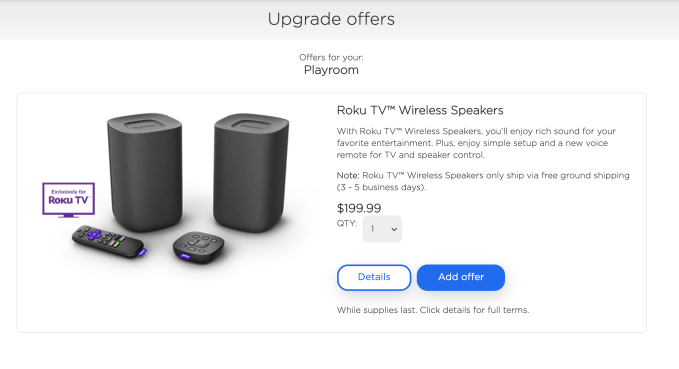 Roku OS 9.1 is rolling out as a software update to select Roku streaming players today (a full list is in the release notes), and will reach all supported players in the coming weeks. Roku TV models are expected to receive the update in early summer.

Update: A spokesperson for Roku insists this characterization of Roku is wrong and insists “neutrality is a strength for Roku” because it doesn’t have any competing interests in other markets, offers an open platform, licenses its OS, offers cross-platform search, and doesn’t produce its own content, among other things.

It is not, however, wrong, for us to point out the new ways that The Roku Channel – a destination key to Roku’s monetization strategy – is now benefiting from changes to the Roku OS.