Twitter continues to experiment with ways to make conversations on its platform easier to follow. In addition to its prototype app twttr, which is testing threaded replies, the company also recently tested labeling replies to highlight those from the “original tweeter” — meaning it would show when the person who first tweeted a post then replied within the conversation thread. Now, Twitter is changing up this labeling system again.

On Thursday, the company said a new test was rolling out which would instead label the “original tweeter” as “Author” — a term that’s a bit more straightforward.

“Original tweeter” had been a nod to the commonly used term “original poster,” which designates the person who started a conversation on an internet message board or online forum. But if the goal was to make Twitter easier to understand for those who are less tech-savvy, “original tweeter” may have been more confusing if they weren’t familiar with that reference. 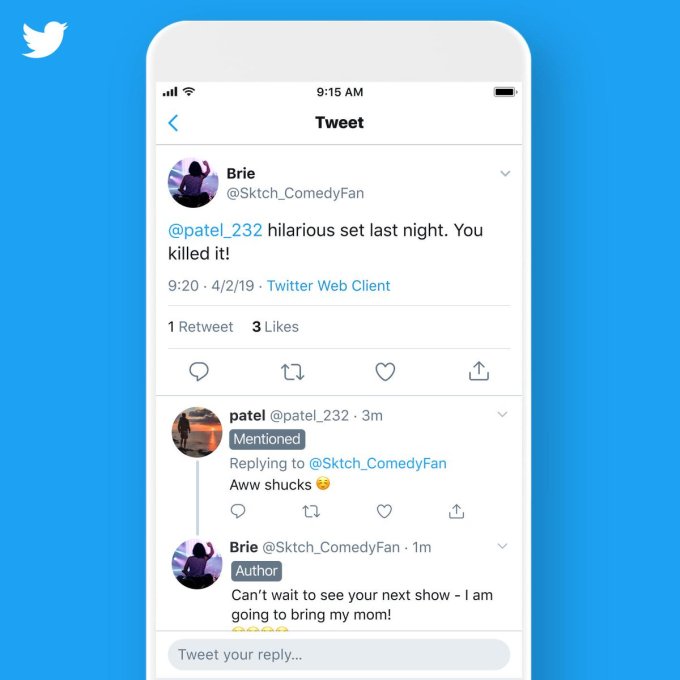 In addition, Twitter is also now adding two new labels, “Mentioned” and “Following,” which will be added to other important tweets in conversation threads.

“Mentioned” will be added to any tweet posted by someone who the original tweeter…er, Author…had referenced in their first tweet. The “Following” label, meanwhile, will be added to tweets from those Twitter users you’re following as a way to catch their replies when scrolling through long threads.

Oddly, these are the same sort of features that Twitter is trying out on its twttr prototype as well, but in a different way. In the invite-only testing app, the original poster is highlighted using a thin gray line next to their tweet, while those you’re following is a brighter blue.

Twitter’s larger goal here is to better design its app for longer discussions. However, the labels also can help in specific scenarios where the replies to a tweet include posts from a lot of parody accounts. Often, parody accounts have adopted usernames and profile pics to resemble that of the person they’re poking fun at — sometimes inadvertently confusing users and, other times, to blatantly troll or spam.

Despite the usefulness of features like labels, these sorts of minor changes feel like an odd thing for Twitter to focus its attention on, when users’ main demands are still an edit button and for the company to deal with abuse and harassment.

On the latter front, Twitter was recently spotted working on a “Hide Tweet” feature. While more controversial than a new label, a hide tweet button would have the potential to impact user behavior, as it allows a poster to hide the replies they didn’t like. As a result, those following a conversation would have to click a button to view these hidden replies. In other online forums, knowing that a trolling or unhelpful comment would be downvoted or removed has helped to stem bad user behavior and encourage better conversations. The feature, however, could be used to silence dissenting opinions, which some people don’t like.

If Twitter won’t roll out an edit button, experiments around dealing with trolls through product features would probably be more useful than continually tweaking Twitter’s extra little flourishes.

will you please, please ever just leave it alone. it's fine.