As Pi, the company had been working on a cone-shaped wireless charger that would sit on a desk and allow the user to charge devices placed within about 12 inches in any direction. It would require a case to work with existing devices, with the trade-off of not requiring the user to place their device directly on top of a charging pad. They showed this device at TechCrunch Disrupt SF in 2017, where the company won the Startup Battlefield competition.

After extensive user testing, co-founder John MacDonald says they heard two common complaints from testers. First, the cone charger, when surrounded by charging devices, took up too much space on tables and counters. Second, no one wanted to use a dedicated charging case in place of the brand name cases they already had. As built-in wireless protocols like Qi grew more and more commonplace, the company came to realize its current approach wouldn’t work.

“Qi is just not designed, even philosophically if you talk to people at the Qi standard, it’s not focused on one foot, two feet of range.” says MacDonald. “It’s really focused on surfaces and areas rather than volumes.”

MacDonald tells me that while they had let potential buyers sign up for an email list to claim a cone device later, the company never accepted money for pre-orders. According to Crunchbase, the company has raised more than $14 million from investors; MacDonald says those investors will maintain their stakes in Spansive, with the rebrand changing nothing about its cap table.

As a focus of its rebranding, the company will also be opening up to outside partners that might want to integrate the volumetric tech from Pi’s cone charger into their own products, with wireless headphone makers mentioned as a potential example. MacDonald says the company has seen considerable interest from potential partners, so it’ll be a key part of the brand moving forward.

Though Pi — or, I should say now, Spansive — is dropping plans for its own cone charger, it’s not dropping out of the consumer wireless charging space. It’s working on a product that MacDonald says the company will announce this summer, focusing on charging multiple devices simultaneously without the need for a case, and on compatibility with Qi devices. Spansive also sent over this teaser-y render, which appears to show an iPhone (or a device with a similar antenna band) resting on top of a charging base: 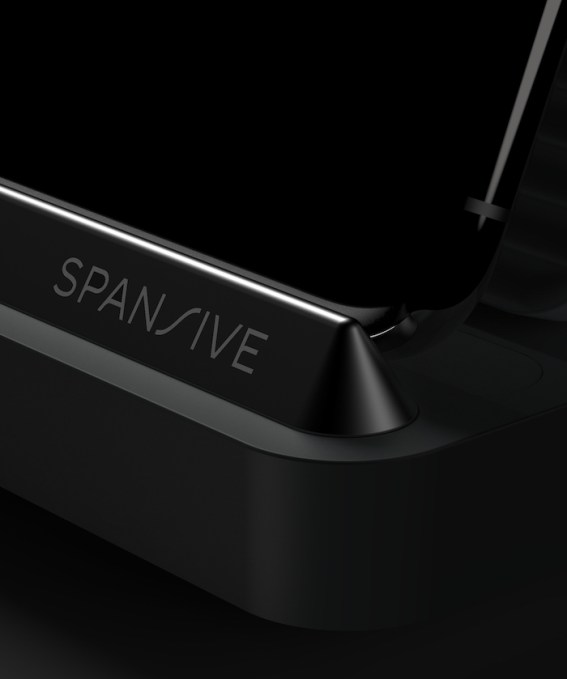 While it’s disappointing to see the cone charger get shelved, wireless charging is clearly a very tough space. Just last week, Apple canceled plans for its AirPower wireless charger more than a year after it was announced, saying the device ultimately wasn’t meeting the company’s standards.