Radio ads broadcast a message to listeners, but Pandora’s new voice ads will allow listeners to respond by speaking aloud — either to get more information about the product being advertised, or to skip the ad if it’s not of interest. The company confirmed it has an agreement to test interactive voice ads where listeners engage by speaking back to the ad. The test will be powered by the San Francisco-based adtech company, Instreamatic, and will launch into beta sometime later this year.

Unlike web and mobile ads — which can be measured through things like impressions and clicks — traditional audio ads aren’t clickable. That means advertisers don’t know for sure how many people who heard the ad later went to seek out more information, or make a purchase.

Interactive voice ads could change that. And they arrive at a time when consumers have grown comfortable interacting with voice assistants, including those on smart speakers like the Amazon Echo, as well as on smartphones, as with Siri on iPhone.

Instead of simply airing an advertiser’s message, an interactive voice ad could ask the listener if they want to learn more about the product. For example, an ad about a new smartphone could include a verbal call-to-action inviting listeners to learn about its features. The listener would respond out loud to the ad to get more information. Of they could respond negatively to skip the ad.

In addition, Instreamatic claims its voice ads platform is powered by AI technologies that allow customers to say more than just “yes” or “no” when interacting with an advertisement. Using technology like machine learning and natural language understanding, the ads understand user intent — and this ability improves the more customers engage with them. 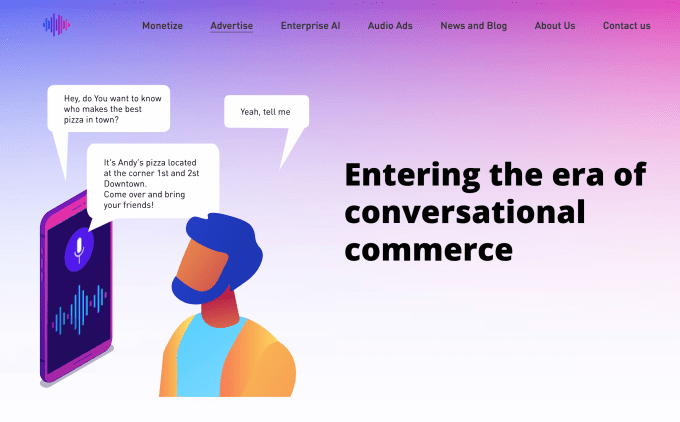 For Pandora, the idea is that its advertisers could target listeners at times they aren’t typically able to respond — like when they’re out running, at the gym, driving or cooking, for example. They aren’t then able to click or tap on ads, or otherwise engage with the advertiser content.

While Instreamatic made an announcement about its deal with Pandora for interactive voice ads, it’s not the only way Pandora is targeting this market.

“Pandora is building a comprehensive voice solution across our consumer-facing offerings with advertising services on top of it to enable our own ‘first party’ offering as well as ‘third-party vendors’ such as Instreamatic and AdsWizz to plug in. Our expectation is that the buy-side — advertisers and agencies — are going to want to do ‘build-once-buy-everywhere’ solutions for voice ads just like they have for other markets, and Instreamatic is the first company focused on supporting buy-side voice ads across publishers,” he explained.

Instreamatic launched five years ago as a digital audio ad network, but has grown its suite of tools to now include voice-activated ads. The company has made other deals for this format, including with free music platform Audiomack; one of Russia’s largest radio groups, Gazprom-Media Radio; and European radio company Global’s DAX, which will allow advertisers to insert ads with verbal prompts into streaming apps like TuneIn and AccuRadio.

Pandora, however, is a notable customer win — and one that could prove out the viability of voice-activated ads on a sizable user base.

Currently, Pandora has an agreement to test the format with Instreamatic and plans to support other third-party vendors like AdsWizz, also sometime later this year. Picard says he’s not aware of any scaled solutions for interactive voice ads beyond these two companies at this time.

That means publishers will need to either provide their own voice solution or rely on these vendors if they want to participate.

Pandora isn’t sharing further details about its voice-enabled ads strategy, but will likely go more in-depth when the tests launch in order to fill in the blanks for potential advertisers.

“The age of voice has arrived, yet there’s remained a stark need for meaningful consumer engagement – and measurable metrics – in the audio ad space,” said Stas Tushinskiy, CEO, Instreamatic.ai, in a statement. “We believe Instreamatic provides the ideal ad platform to serve this marketplace. We’re excited to be engaged with Pandora to bring this AI-enabled technology to its listeners and advertisers, and prepared to scale these new experiences very quickly once deployed.”