One of the most buzzy announcements on Apple’s stage this week was Apple Card, its in-house credit card powered by Goldman Sachs and Mastercard. Consumers, tech press, financial press and Wall Street were all intrigued for various reasons.

But there are still a ton of questions around the way it works mechanically, the terms involved for consumers and its overall benefits. Though I’m not a financial reporter, I did used to cover payments and I’m a huge points hound. Some of the benefits (and caveats) of Apple Card are worth examining a bit more.

In some ways, Apple getting into the credit card game was one of the tech world’s biggest finally’s. Once Apple launched Passbook, it became extremely clear that it was headed towards this end game, with stops along the way for loyalty cards, coupons, external credit cards and ticketing.

This week, we got to see what Apple thinks is a solid ‘version 1’ of its credit card offering. Yes, this is a V1, and Apple is going to be iterating on the concept with new features and benefits.

The basics of Apple Card are pretty straightforward. We’ve already posted the basics here so I won’t go over them at length. It’s a virtual card and physical card that can be used for both regular and Apple Pay purchases at any place Mastercard works. The app companion categorizes purchases automatically, shows you where they were made and has a design that makes it easy for you to see interest charges, spending and cash back. The physical card offers 1% cash back, the virtual card offers 2% cash back on Apple Pay purchases and 3% back on purchases from Apple. The cash back is delivered daily to your Apple Cash balance or to the card monthly as a credit balance if you don’t have or want an Apple Cash account.

But beyond those basics, there are still a lot of questions about some aspects of the way the card works. Here are some interesting bits.

Activating a physical Apple Card will happen with a tap of the iPhone to the card. The activation takes place with a pop up view of the card and an activation button, similar to the pairing process of AirPods. You can see signs of this in the current beta.

There is no penalty interest rate on Apple Card. There have been some reports that Apple Card will charge penalty rates, largely due to some required regulatory legalese. Penalty rates are an increase of your interest rate if you fail to pay on time. That is not true. Apple Card has no late fees and no penalty rates. You will continue to pay your agreed upon interest rate on your outstanding balance, but that rate will not go up. It will impact your credit score, as Apple does do standard reporting, but neither Apple nor Goldman Sachs will increase your rate due to late payment.

Apple will place Apple Card users at the low end of their interest rate tier. While Apple Card’s interest rates fail to break the mold in any major way (they are roughly between 13-24%), Apple will place users who sign up at the lower end of the tier that they land in due to their credit score. This isn’t some incredible re-imagining of how to offer credit or an intensely low interest option, but it could shift you to the bottom of a tier when you qualify instead of paying a few points higher at your ‘exact’ score.

You can pay your balance via ACH from a bank account or via Apple Cash. Apple Cash is not required to pay your bill, though cash back earned or any other money you have in there can go towards your balance if you desire. 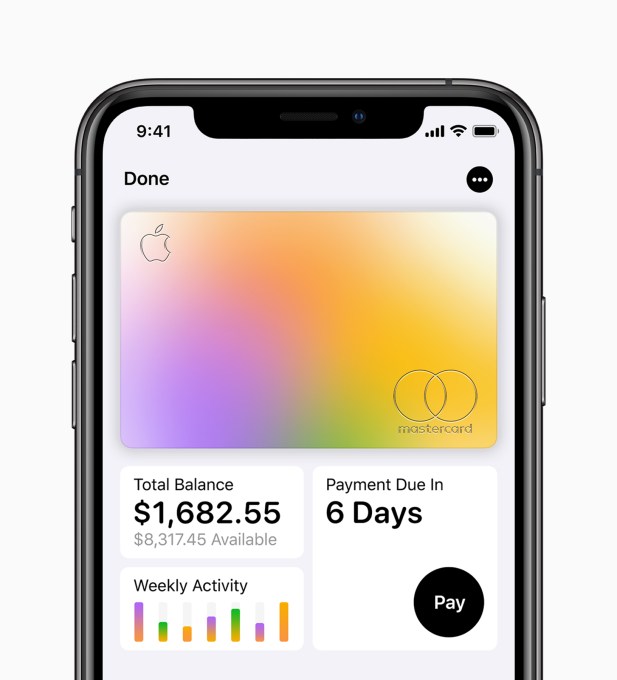 Apple Card does not require or display signatures. Neither the physical card nor the app will display a signature. A network change a few months ago means that signatures are not required at point of sale for any credit cards. Though some stores may still ask to see ID, lack of a signature anywhere within Apple Card’s system shouldn’t be a roadblock to using it.

The physical Apple Card does not support contactless payments. If you’ve got a tap terminal, you’re supposed to use Apple Pay.

Perhaps the biggest security feature of the offering is that Apple Card can generate virtual card numbers for online non-Apple Pay purchases. Though Apple said that the app would display your card info during the event, they weren’t specific on what that info would be so I got some more detail here.

I use a virtual card service called Privacy for transactions online where I don’t know the person or company that the number is going to well. Several banks and credit card companies like Bank of America and Citi also offer virtual card numbers currently. Apple Card, though, will doubtless be the largest body of consumers to ever have easy access to a virtual card number with an easy to use interface and will expose many more people to the concept.

If you use Apple Card for a subscription or ongoing service, by the way, it’s possible you’ll have to re-enter your info if you regenerate your card — though many, many retailers — especially if they have ‘Card on File’ systems already use account updater services. These services can pull the new number from Mastercard to make sure that recurring payments remain in place and Apple Card members will have nothing to do. That old number is, however, completely invalidated.

The physical card has a fixed number on the mag stripe, but you don’t know what it is. It’s important to note that the number you have in the app and the number that are on the mag stripe can be totally different and it doesn’t matter. You’ll only really know the last 4 digits of your PAN on the physical card. If your card gets lost or stolen you can get replacement cards for free, and you can easily freeze the card with the app in case of theft or fraud.

Because of the way it is set up, every purchase with Apple Card requires biometric identification aside from purchases with the physical card. In the case of a non-Apple Pay transaction online — you must get your card number from the app and that is unlocked via Touch ID or Face ID, so biometrics are still in the path. And, for Apple Pay transactions, they are authenticated at the time of transaction. I personally think it would be cool to optionally require a confirmation from your phone to let a charge go through as well, but that is likely a v2 situation.

When you get Apple Card the virtual PAN is pushed to auto fill in Safari. So when you sign up you’re going to automatically have access to the virtual card number Apple generates for you on Safari on iOS and Mac. It will just be there for you to use.

Replacement cards are free. Some people were worried that the flashy titanium cards would be expensive to replace. There is no fee.

There is currently no provision for multiple users or shared cards. For now, it’s one card per person, per account.

Apple Card users must have two factor authentication set up to sign up.

Using Apple Card on Android is pointless. This is kind of silly but people asked me. You can’t sign up for or administrate most of Apple Card’s features on Android — but if you were to switch to Android you could continue using your physical card and paying your bill — but without the majority of the cash back or security benefits why would you?

Goldman Sachs will not sell data for marketing purposes. This was on the keynote slide but there were some additional questions about it. The data that they see can be used for internal reporting but cannot be used for external or internal marketing or advertising. That goes for third parties as well. Though some regulatory or operational partners will need to see or transmit some data, all of that must be related to operating Apple Card only, not marketing or advertising.

Why cash back? There were definitely some questions that I got as well about Apple going cash back only. My assumption, which has been backed up by those I’ve spoken to, is that Apple wanted the simplest, most universal benefit structure — and that is cash. Points are by nature relatively opaque and can vary from day-to-day in value on the dollar. For this initial offering, Apple wanted to offer a straight cash benefit that can be accessed nearly immediately, transferred to a bank or spent like cash. Though the cash back is relatively competitive, it is not the highest percentage in the industry.

Apple Pay stuff. This is more Apple Pay than Apple Card stuff but some quick notes on the transit offerings coming to Pay.

Overall the Apple Card has some relatively unique and interesting takes on data transparency for users, who are getting what appears to be an information rich but easy to interpret interface that rivals the best apps (like the AMEX app) out there for consumer cards. It’s also got a solid set of security features that are missing only a couple of small improvements like per-merchant or per-transaction numbers that would make them the best offering in the industry.

With what are bound to be record low customer acquisition costs and a self-selected group of higher end customers, Apple Card is probably going to be a fairly solid hit for Apple. I just hope they continue to iterate for additional versions of the program.