While creating self-driving car systems, it’s natural that different companies might independently arrive at similar methods or results — but the similarities in a recent “first of its kind” Nvidia proposal to work done by Mobileye two years ago were just too much for the latter company’s CEO to take politely.

It is clear Nvidia’s leaders have continued their pattern of imitation as their so-called “first-of-its-kind” safety concept is a close replica of the RSS model we published nearly two years ago. In our opinion, SFF is simply an inferior version of RSS dressed in green and black. To the extent there is any innovation there, it appears to be primarily of the linguistic variety.

Now, it’s worth considering the idea that the approach both seem to take is, like many in the automotive and autonomous fields and others, simply inevitable (and indeed similar ideas have appeared before). Car makers don’t go around accusing each other of using the similar setup of four wheels and two pedals. It’s partly for this reason, and partly because the safety model works better the more cars follow it, that when Mobileye published its RSS paper, it did so publicly and invited the industry to collaborate.

Many did, and as Shashua points out, including Nvidia, at least for a short time in 2018, after which Nvidia pulled out of collaboration talks. To do so and then, a year afterwards, propose a system that is, if not identical, then at least remarkably similar, and without crediting or mentioning Mobileye is suspicious to say the least.

The (highly simplified) foundation of both is calculating a set of standard actions corresponding to laws and human behavior that plan safe maneuvers based on the car’s own physical parameters and those of nearby objects and actors. But the similarities extend beyond these basics, Shashua writes (emphasis his):

SFF defines identical concepts with slightly modified terminology. Safe longitudinal distance is instead called “the SFF in One Dimension;” safe lateral distance is described as “the SFF in Higher Dimensions.”  Instead of Proper Response, SFF uses “Safety Procedure.” Instead of Dangerous Situation, SFF replaces it with “Unsafe Situation.” And, just to be complete, SFF also recognizes the existence of a Danger Threshold, instead calling it a “Critical Moment.”

This is followed by numerous other close parallels, and just when you think it’s done, he includes a whole separate document (PDF) showing dozens of other cases where Nvidia seems (it’s hard to tell in some cases if you’re not closely familiar with the subject matter) to have followed Mobileye and RSS’s example over and over again. 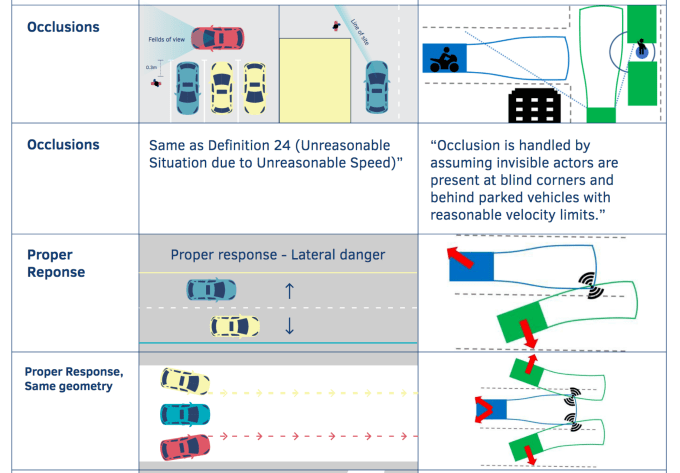 Theoretical work like this isn’t really patentable, and patenting wouldn’t be wise anyway, since widespread adoption of the basic ideas is the most desirable outcome (as both papers emphasize). But it’s common for one R&D group to push in one direction and have others refine or create counter-approaches.

You see it in computer vision, where for example Google boffins may publish their early and interesting work, which is picked up by FAIR or Uber and improved or added to in another paper 8 months later. So it really would have been fine for Nvidia to publicly say “Mobileye proposed some stuff, that’s great but here’s our superior approach.”

Instead there is no mention of RSS at all, which is strange considering their similarity, and the only citation in the SFF whitepaper is “The Safety Force Field, Nvidia, 2017,” in which, we are informed on the very first line, “the precise math is detailed.”

Just one problem: This paper doesn’t seem to exist anywhere. It certainly was never published publicly in any journal or blog post by the company. It has no DOI number and doesn’t show up in any searches or article archives. This appears to be the first time anyone has ever cited it.

Update: Since I wrote this, Nvidia has added the paper in question, though it’s undated and as noted has not been cited or published before this.

It’s not required for rival companies to be civil with each other all the time, but in the research world this will almost certainly be considered poor form by Nvidia, and that can have knock-on effects when it comes to recruiting and overall credibility.

I’ve contacted Nvidia for comment (and to ask for a copy of this mysterious paper). I’ll update this post if I hear back.