California Representative Devin Nunes announced that he will file a $250 million lawsuit against Twitter, alleging that the company engages in “explicit censorship” and has allowed critics to defame him on the platform. Simultaneously complaining that Twitter silences its critics while asking Twitter to silence his critics is a curious legal strategy, but really it’s par for the course for one of President Trump’s most theatrically partisan and unabashed allies.

Nunes first threatened legal action against Twitter last year after claiming that the company was “shadow banning” conservatives, effectively burying their accounts. Twitter clarified that the network does not bury any user content based on ideology and that a since-resolved algorithmic issue failed to populate auto suggestions for some Twitter users, including both Democratic and Republican lawmakers.

In a complaint reported by Fox News, Nunes appears to be following through on last year’s threat.

“Nunes has no adequate remedy at law,” the complaint, filed today, claims. “Without Court intervention and an injunction, Nunes will suffer actual and irreparable injury to his property interests and personal rights by the mere fact that Defendants’ defamatory tweets can be retweeted and republished forever by third-parties.”

TechCrunch reached out to Nunes as well as Twitter to request a copy of the filed lawsuit, but for now we’re just going off the complaint. (It’s possible that Nunes won’t follow through with the filing, but a lawsuit like this is mostly a publicity stunt either way.) 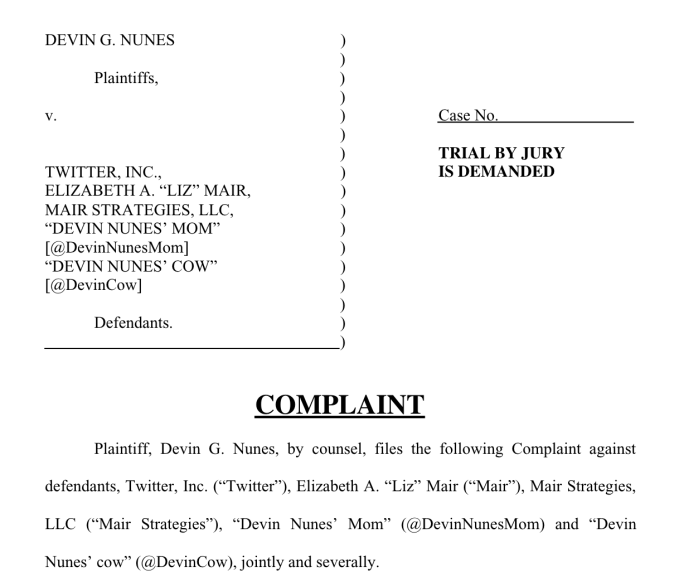 As you can see above, the complaint’s defendants include not only Twitter itself and a Nunes critic named Liz Mair but also @DevinCow and @DevinNunesMom, two accounts parodying the lawmaker’s cow and his mother, respectively.

Of particular note, the lawsuit objects to a colorful array of claims made by the since-suspended account @DevinNunesMom:

– “Nunes is ‘not ALL about deceiving people. He’s also about betraying his country and colluding with Russians'”

– “I don’t know about Baby Hitler, but would sure-as-shit abort baby Devin”

The lawsuit also accuses “Devin Nunes’ Cow” of spreading false claims to its 1,204 Twitter followers. Those claims include stating that “He’s udder-ly worthless and its [sic] pasture time to move him to prison” and “Devin is whey over his head in crime.”

Dairy puns notwithstanding, the allegedly “egregiously false, defamatory, insulting, abusive, hateful, scandalous and vile statements” that prompted Nunes to name the parody accounts are fairly tame compared to much of the hatespeech endured by Twitter users who don’t also happen to be members of Congress. Further, Nunes would need to prove that the three accounts in question acted with “actual malice,” a higher legal standard reserved for proving defamation against a public figure — and one intended to safeguard free speech.

Nunes’ legal threat, conspicuous as it might be, takes aim at a core tenet of the web: the idea that internet companies are not legally liable for the content others publish on their platforms. That law, known as Section 230, is a provision of the Communications Decency Act and its centrality to the web we know and use today can’t really be overstated.

The consequences of indecency