Twitter’s new prototype application is rolling out to the first group of testers starting today, the company announced this afternoon by way of a tweet. The app, which Twitter is calling “twttr” as a throwback to its original name, was first introduced at the CES conference this January. It aims to offer Twitter a more experimental testing space where the company can try out new ideas outside of its existing public network, gain feedback from testers, then develop new features as a result of what it learns.

Initially, the new twttr app will focus on testing new designs for conversations. As the company demonstrated at CES, the prototype app will show a different format for replies, where conversations themselves have a more rounded chat-like shape and are indented so they’re easier to follow. Engagements, sharing options and other tweet details are hidden from view in order to simplify reading through longer threads.

And, most notably, the different types of replies are color-coded to designate those from the original poster as well as those Twitter users you personally follow. This is meant to offer better visual cues to readers who are trying to follow a lengthier thread where, often, side conversations take place, or the original poster jumps in to clarify things or respond to individual tweets.

Our prototype app, twttr, launches to the first group of participants today. #LetsHaveAConvo about new features to build a better Twitter together.

Over time, Twitter may use the prototype app to test out other changes it wants to make to the product. For instance, the company has experimented with ideas around status update fields and icebreakers as your pinned tweet to encourage conversations.

Twitter has said not everyone will be accepted to the prototype-app testing program. Only a couple of thousand of English and Japanese speakers will be invited, provided they follow Twitter’s rules. However, no one is under NDA, so testers will be able to discuss what they’re seeing on Twitter itself, which opens up the ideas to more feedback.

Twitter says the first group of testers will receive an email invite sometime over the next few days. Once received, users must click a link to confirm their participation, then await another email invite from Apple’s TestFlight.

They can then download the new twttr app and use it instead of the main Twitter app, while tweeting about the new look using the hashtag #LetsHaveAConvo. Testers also can submit feedback through an online form.

The twttr app was already spotted in the wild before today’s announcement, but it hadn’t rolled out in large numbers at that time.

After all these years, Twitter is still trying to figure out how to improve conversations on its platform. Not only are they challenging to follow, visually speaking, they often devolve into trolling and abuse. That’s something other changes to the product may try to tackle, from enhanced reporting procedures to Twitter’s latest development of a “hide tweet” button.

The new prototype app isn’t immediately looking to solve the problems around online abuse — though as a side effect of redesigned conversation threads, comments that contribute to instead of detract from an online conversation could be better highlighted, perhaps. 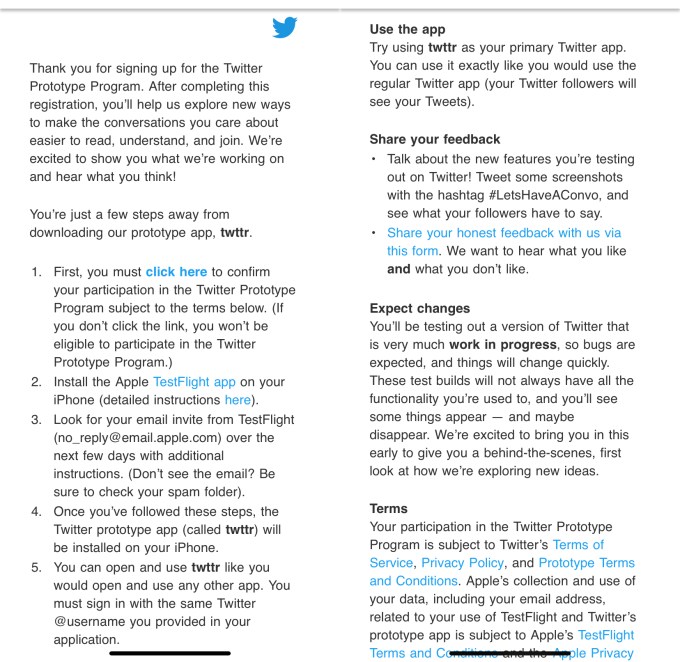 But largely the app will focus on product changes where user feedback is critical, as in the redesign of conversations.

“The spirit of the [prototype testing program] is: can we just develop more in the public and bring people in earlier?,” explained Sara Haider, Twitter’s director of product management, in January. “We need more signal in the development process.”

As Twitter’s email to testers explains, the app will be “very much a work in progress.”

“These test builds will not always have all the functionality you’re used to, and you’ll see some things appear — and maybe disappear,” it notes. A further FAQ about the program is here.

Twitter says those who haven’t yet applied to test the new app can still do so. Applications opened last month, and remain open today.

Already applied? Check your email for updates in the next few days. On the waitlist? Stay tuned, we’ll add participants. Want in? You can still apply!