As many as 1 in 5 people today are mooching off of someone else’s account when streaming video from Netflix, Hulu or Amazon Video, according to a new study from CordCutting.com. Of these, Netflix tends to be pirated for the longest period — 26 months, compared with 16 months for Amazon Prime Video or 11 months for Hulu. That could be because Netflix freeloaders often mooch off their family instead of a friend — 48 percent use their parents’ login, while another 14 percent use their sister or brother’s credentials, the firm found.

At a base price of $7.99 per month (the study was performed before Netflix’s January 2019 price increase), freeloading users could save $207.74 over a 26-month period. At scale, these losses can add up, the study claims. 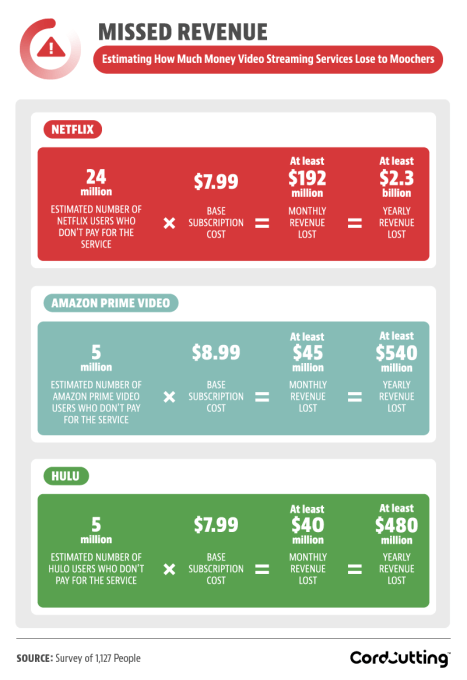 The report estimates Netflix could be losing $192 million in monthly revenue from piracy — more than either Amazon or Hulu, at $45 million per month and $40 million per month, respectively.

Millennials, not surprisingly, account for much of the freeloading. They’re the largest demographic pirating Netflix (18 percent) and Hulu’s service (20 percent). But oddly, it was Baby Boomers who were more likely to borrow someone else’s account to access Amazon Prime Video. 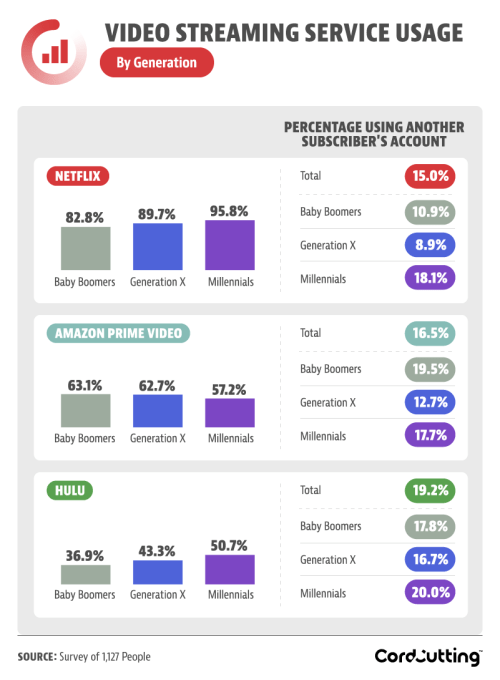 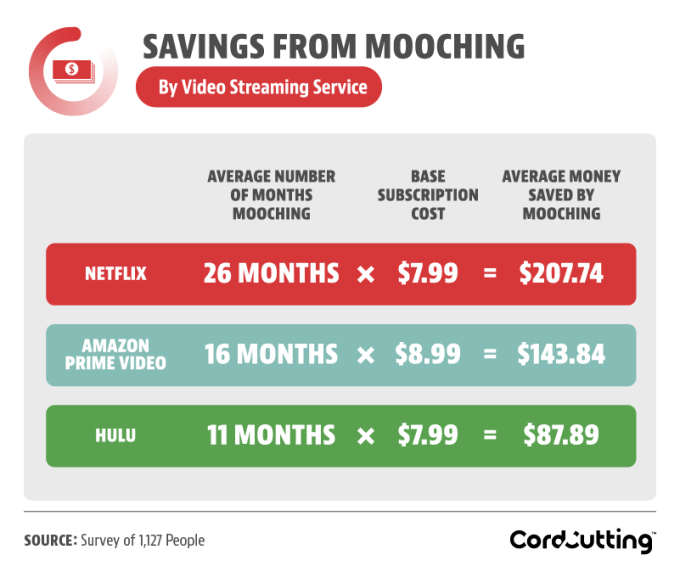 There’s an argument that those who pirate would never be paying customers, so these aren’t true losses. It’s the same sort of thing that was said about Napster mp3 downloads back in the day, or about those pirating movies through The Pirate Bay. But there is some portion of the freeloading population that claims they would pay, if they lost access.

Of course, there can be discrepancies between what consumers say they will do versus what they actually end up doing. So such claims that “I’d definitely pay,” have to be taken with the proverbial grain of salt.

It’s worth noting, too, this study calculated figures by looking at Netflix’s single-screen-at-a-time account — in theory, the one meant to be used by a single individual and not shared as a family plan, in order to keep the estimates conservative. The consumer survey defined mooching by asking users if they use a service they don’t pay for, then asked what they would or would not pay for themselves, if that access fell through. 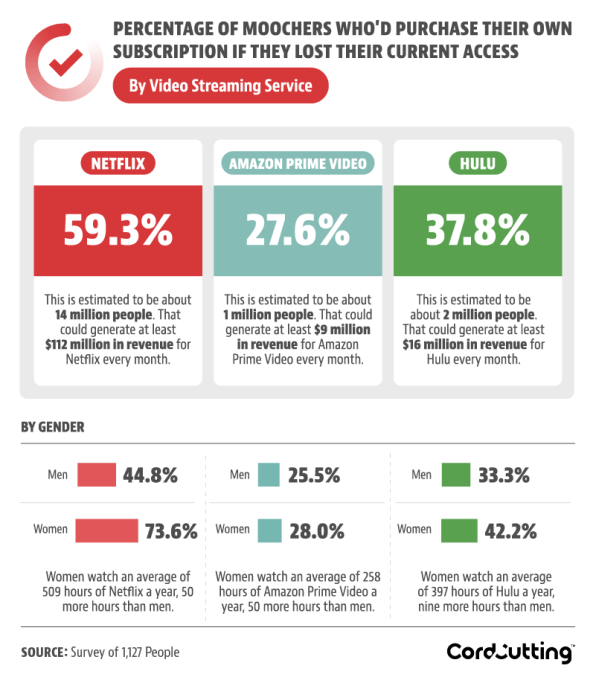 Hulu, at least, has more recently tried to make its service more appealing to penny-pinchers. At its new price — $5.99 per month, rolled out this week — it’s making it harder to justify freeloading.

Netflix, on the other hand, seems to know its value, and raised prices this year so its base plan is a dollar more at $8.99 per month, and its most popular plan has climbed to $12.99 per month.

The full study offers other details on cord-cutting trends, including breakdowns by gender and details on who accounts are mooched from, among other things.