In an effort to one-up Spotify and Apple Music, Pandora this morning announced the launch of a new marketing tool for artists, called Pandora Stories. The feature allows artists to build music playlists combined with voice tracks, where they can add a narrative and deeper insights — explaining, for example, what a song means for them, what inspired their music, the story behind the music or anything else they want to add. When listeners play these Pandora Stories playlists, they get to hear both the music and the storytelling, interspersed.

The feature may not be only adopted by musicians, notes Pandora.

The company believes Pandora Stories may appeal to others who want to create music-driven stories, like actors, filmmakers, athletes, celebs, authors, podcasters and thought leaders. This will be possible because the feature provides access to Pandora’s catalog of fully licensed songs to use in Stories, the company says.

At launch, the first Pandora Stories include:

The last one is more of an example of how the new format could be used for storytelling, rather than one that focuses on a single artist. Future Stories are planned with 2 Chainz, Rob Thomas and others.

The feature is rolling out as an addition to Pandora’s Artist Marketing Platform, Pandora’s suite of free, self-serve tools that help artists promote their songs, albums and podcasts. The platform has generated more than 3 billion listener impressions to date, Pandora claims.

However, creators interested in using the feature will need to submit a form to receive access to the Pandora Stories tools, which implies a level of vetting is in place. (The company says any stories by these creators are reviewed by Pandora before they’re run.)

All users will be able to stream Pandora Stories, though some will have to watch an ad to do so. Premium subscribers can listen to Pandora Stories ad-free, while Pandora’s ad-supported and Plus listeners can listen by way of Premium Access after viewing a 30-second ad. 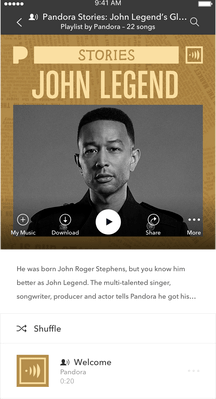 Users will be able to discover Pandora Stories using Search — the same way you’d look for one of Pandora’s standard curated playlists. The Stories may also be recommended to listeners through the Featured Playlists module in Browse.

To some extent, Spotify offers a behind-the-scenes look into some music, through its Genius-powered “Behind the Lyrics” feature, but that’s more passive. However, Spotify also offers a number of video shows focused on musicians and artists. But neither of these are a direct comparison with Pandora Stories.

Instead, the idea for Pandora Stories is meant to capitalize on listeners’ growing interest in streaming podcasts, by offering them access to voice-based stories with a different twist. Instead of having the podcaster discuss the music or interview an artist, the new format allows the artist to do that, directly.

“Podcasts can tell stories about music, but it’s difficult to include full songs, and regular playlists have songs but lack personal context from the artists behind them,” said Jeff Zuchowski, Pandora’s VP of Artist Marketing and Industry Relations, in a statement. “We’ve created Pandora Stories to fill that void, bringing together the greatest strengths of both podcasts and playlists, and giving artists the opportunity to connect with listeners on a uniquely deep and personal level,” he added.