HiHello, the latest startup to take aim at business cards with its own digital alternative, has raised a $2.5 million seed round to continue its efforts in building a better contact management solution designed for the mobile era. The new financing was led by August Capital, K9 Ventures and TenOneTen Ventures, and will see Villi Iltchev from August Capital joining the HiHello board as a result.

The round closed last year, but hadn’t been announced.

The now six-month-old startup was dreamed up by K9 Ventures founder Manu Kumar, along with co-founder and Caltech and Columbia alum Hari Ravi. Notably, Kumar has been trying to solve the problem of contact management for years, having co-founded and sold his startup CardMunch to LinkedIn — a decision he later regretted, saying last year he was “still peeved” at LinkedIn for ruining and eventually killing the product. (LinkedIn later pawned off its ashes to Evernote.)

With HiHello, Kumar is giving contact management and business networking another shot. Version 1 of the app offered a simple solution that lets users exchange contact information by way of scanning a QR code with their phone’s native camera app, or by sharing information using SMS or email. The mobile app lets you create custom profiles in order to share with another person either your work contact information, personal details or any other custom profiles you want.

As HiHello enters its next phase, the company aims to pick up some of the better ideas from past apps in this space — like Plaxo, Bump and even CardMunch — while also overcoming their limitations.

For example, Bump had once required that both people have the app installed in order to work. HiHello today already works if only one person has the app. But it will roll out a more elegant solution for when two HiHello users are present. A “Nearby” screen in the app will allow people to share contact information with one another based on a dual opt-in system.

From Plaxo, HiHello will adopt the idea of automatically updating contact information for everyone who has the user in their address book when information is changed. 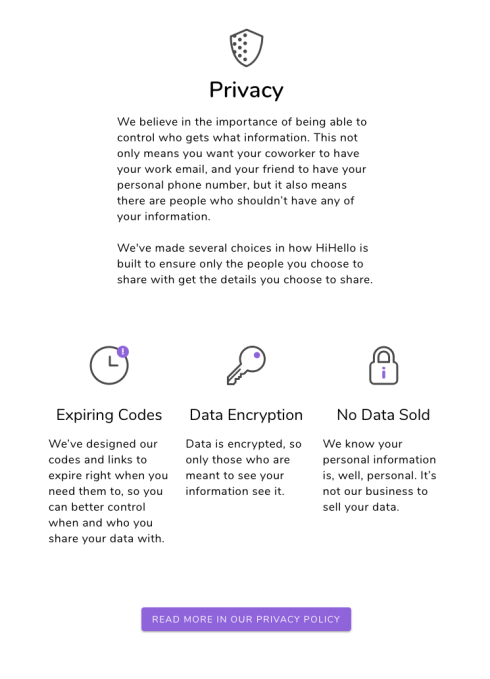 The startup is taking a different approach to privacy than Plaxo did, saying it won’t spam or sell user data, nor will it ask permission to access your contacts. Instead, HiHello will act as an address book provider whose database of contacts you can add to your device. This keeps it isolated and separate from other address sources, and ensures it won’t “mess up” your own contacts in the process.

“There will be a base level of features that are available for free, but our goal is to build a sustainable (and profitable) company that delivers value to customers,” says Kumar. “The full functionality will come with paid subscription to HiHello. We’re never going to sell users data or rely on advertising and such. We’re not ready to talk about pricing and other details just yet, as we’re still in build mode.”

Kumar says he doesn’t want to make the same mistake he did with CardMunch. Instead, he wants the company to be sustainable, “so that we never have to sell HiHello to an acquirer who will then proceed to ruin the service and kill it.”