We were promised flying cars but, as it turns out, flying boats were easier to build.

SeaBubbles, a “flying” boat startup that uses electric power instead of gas, hit Miami this weekend to show off one of its five prototype boats — or six, if you count an early, windowless white boat they’ve lovingly dubbed the “soapdish.” This innovative boat design combines technology from nautical industries and aviation and intelligent software to raise the hull of the boat out of the water using foils, which helps it consume less energy by allowing it to travel on rougher waters with reduced drag, while also keeping the passenger cabin relatively comfortable.

When raised, the boat is “flying” above the water, so to speak.

Founded only three years ago in Paris, the idea for SeaBubbles was dreamed up by Alain Thébault, a sailor who previously designed and piloted the Hydroptère, an experimental hydrofoil trimaran, using a similar system that lifts the boat in order to reduce drag. That boat went on to break the world record for sailing speed twice, at 50.17 knots. Meanwhile, SeaBubbles’ co-founder Anders Bringdal is a four-time windsurfing world champion, who also set a windsurfing world record at 51.45 knots.

Together, the two have envisioned SeaBubbles as a way for cities to reduce traffic congestion and help the environment by taking advantage of the area’s waterways to move people around in fast water taxis. 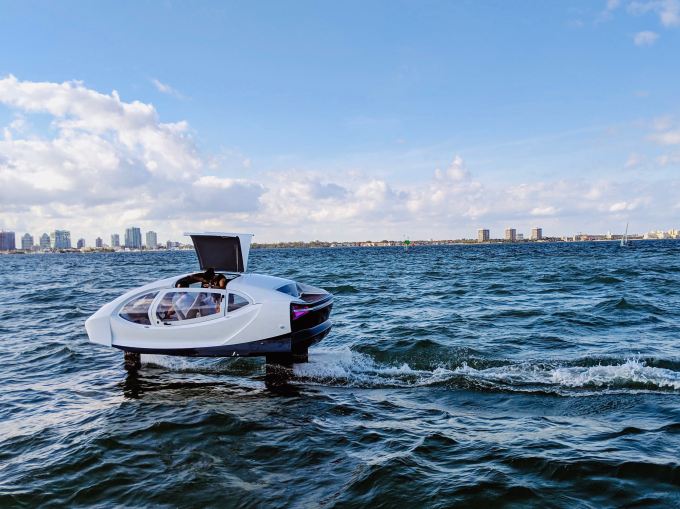 “The cities today have one thing in common: pollution and congestion,” explains Bringdal. “Every city has waterways — ones that are fairly unused. Think about having a giant freeway that goes straight down the center of the city, and no one uses it… why is that?,” Bringdal continues.

The cost savings come from an all-electric design, which means the boat charges at a power station — preferably one that’s solar charged, of course — instead of guzzling gas.

The company experimented with all sorts of designs and models before settling on its first-to-market SeaBubbles water taxi: a smaller, 4.5-meter version that seats four in addition to the pilot. However, the technology itself is scalable to larger boats or even ferries.

According to SeaBubbles’ U.S. partner, Daniel Berrebi, whose company Baja Ferries has made a “small” investment in SeaBubbles, even larger boats like his could eventually benefit from the technology.

Beyond his obvious business interest on that front, Berrebi is also working with SeaBubbles to help the company make its first U.S. sales. He says he’s sold four boats to private individuals in the area — yes, sold as in “checks in hand, and signed on the dotted line.” These buyers don’t want to be named, but may include well-known names in music and sports. (Of course one has to wonder how much anonymity they will really have when tooling about Miami waterways in one of only a handful of these flying boats currently in existence?) 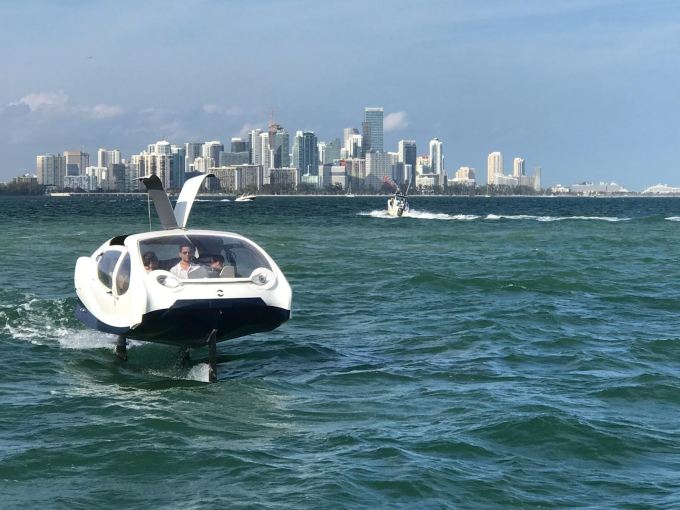 SeaBubbles has been able to come to market with its technology so soon because it’s not building everything in-house.

The boats’ engines are from Torqeedo, for example, while the fly-by-wire software to control the boat comes from foiling and flight control systems engineer Ricardo Bencatel’s company, 4DC Tech. His software solution also powered America’s Cup teams’ boats, like those from Artemis Racing and Oracle. But the version running on SeaBubbles has customized components to control the boat’s unique features.

“The [SeaBubbles] boat has three main sensors — it has two high-altitude sensors to measure the height of the water, then it has a gyroscope — like the one in cell phones,” explains Bencatel.

“The computer combines those measurements from the sensors, then it knows the angles of the boat, the height and the speed,” he says. The software then uses this information to control the flaps on the boat to make adjustments. “For example, the lift — if you want to go higher,” Bencatel says. “Or if it’s rolling to one of the sides, it uses the flaps to turn it to the other side. Or if it’s pitching — bow down or bow up — it uses the front or the rear flaps,” he adds. 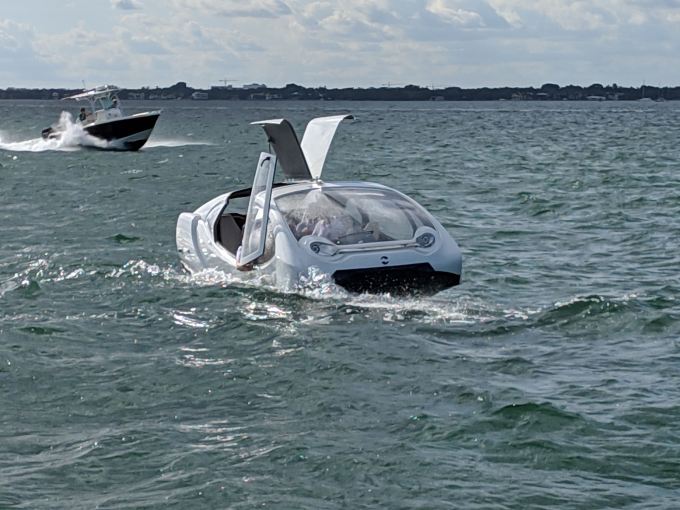 And all of these adjustments are being made automatically, by way of software, meaning the boat operator only really has to turn the wheel and drive. They don’t have to think about when to raise or lower the boat — it just happens when the boat reaches a certain speed. Under six knots, the boat is experiencing 100 percent drag, while above eight knots, the boat is “flying” and the drag is reduced to 60 percent. This makes the ride less bumpy, too.

The lithium-ion batteries used by SeaBubbles are IP67 waterproof, and, over time, the boat could make up for its high sticker price — $200,000 at its suggested retail price — with savings on gasoline and reduced maintenance costs.

The prototype version of the SeaBubbles boat has only 1.5 hours autonomy and a five-hour battery recharge to show off the technology. But the company claims the versions going into production have 2.5 hours autonomy and a 35-minute recharge. These are the ones they expect to ship this summer to the first purchasers. 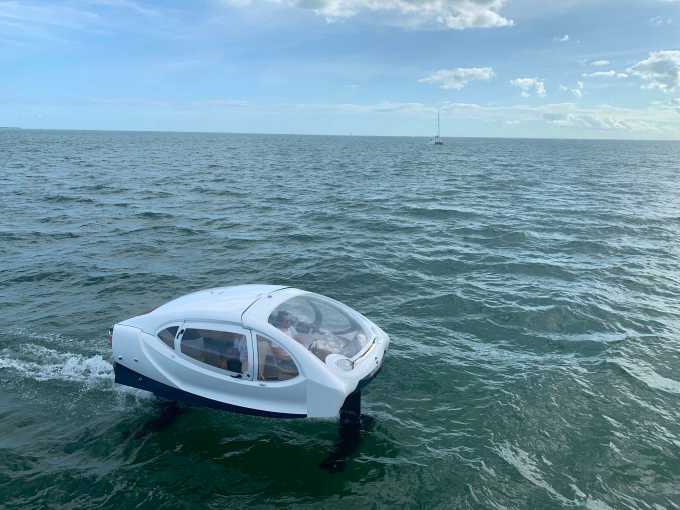 In addition to Miami, SeaBubbles also has customers in Russia — a luxury hotel in Moscow and a deal in St. Petersburg — as well as in Rotterdam and Amsterdam. It plans to start building boats for these markets, and hopes to reach Paris by this summer or the next. In Paris, the prototype boats run slower — take-off speed is six knots, and cruising speed tops out at 15 knots. The production version is faster due to bigger engines, with an average cruising speed of 16 knots and a top speed of 20 knots.

The company is in Miami this week to show off its boat to more buyers, and take meetings with local officials.

Bringdal admits that some of the company’s earlier statements may have been overly ambitious — like having boats in 50 cities by 2024. ”I think, in reality, it’s step by step,” he says. “We’re very happy to be seeing something here in the U.S.” SeaBubbles, which has seven staff full-time and 25 people, including contractors, has raised $14 million to date from investors, including the founder of drone maker Parrot, Henri Seydoux; Partech Ventures; the French government-backed BPI fund; MAIF, a French insurance group; as well as friends, family and other angels.

The company is preparing to raise a Series A.