Ant Financial, the financial services behemoth affiliated with Chinese e-commerce giant Alibaba, has made its first big move into Europe. It’s acquired London-headquartered payments company WorldFirst in a deal that sources tell us is valued at around $700 million.

(That price would also line up with multiple reports from December claiming the two were in talks for an acquisition of around £550 million, or $717 million at current exchange rates.)

This isn’t your average multi-hundred million dollar acquisition. The deal was confirmed by WorldFirst in a note to customers while Alibaba, which curiously didn’t put out an official press release, acknowledged the acquisition to us through a spokesperson.

Yet despite a relatively under-the-radar outing, the deal has potentially significant consequences. It not only underscores the strong market connections between China and Europe, but also the margin (and thus strategic) pressures that many smaller remittance companies are under in the wake of larger companies like Amazon building its own money-moving services, as well as competition from local players in Asia.

One of a number of globally active money remittance services, 15-year-old WorldFirst lets businesses and consumers move money between countries at prices that are lower than regular banks.

The company claims to have transferred over £70 billion ($90 billion) for customers since 2004, with more than one million transfers made each year. WorldFirst is a player in the competitive remittance market, in which migrant workers send money home to family, who can make transfers online or in person at WorldFirst outlets.

Ant Financial is best known for its Alipay service, which is China’s dominant mobile payment app with over 550 million registered users. Alibaba owns one-third of Ant, which is valued at as much as $150 billion, and it has been pushing to expand its empire outside of China and beyond Asia Pacific, too.

According to Quin, WorldFirst will retain its brand and become a wholly-owned subsidiary of Ant Financial. Many merchants in the UK already accept Alipay, which has expanded to cater for Chinese tourists spending money overseas.

“The tie-up will add WorldFirst’s international online payments and virtual account products to Alipay’s range of technology solutions,” an Ant Financial spokesperson told TechCrunch without disclosing the size of the buyout.

WorldFirst has been financed by private equity investors and, as a private company, it keeps its financial details closely held, but in August 2018 it noted that it had transferred more than $95 billion for some 160,000 customers — businesses and individuals included. A source told us its GMV was around $10 billion a year.

But sources noted that it was under pressure of its own that would have made securing a deal with Ant even more of a priority.

“That whole sector of payments from the West to China sellers for e-commerce is under massive margin pressure from Amazon going direct with its own service, plus new China based entrants PingPong, LianLian and Airwallex,” one executive very close to the remittance space told us. “WorldFirst had recently seen low to declining growth because of this.” Another source said that it had been shopping itself around.

(The Amazon reference is related to a service of its own to send merchant funds to China, through Amazon Currency Converter for Sellers, luring sellers away from using third-party services like WorldFirst. In another development to expand its coverage in cross-border payments, Amazon has now also launched Amazon PayCode, a new service it has built with Western Union to let people in markets where Amazon has not launched a local site to pay for goods in local currencies on its platform. The deal was first announced in October last year, and has seen the two companies offering payment alternatives in places like Thailand and Kenya to remove the need to transfer payments in other ways, via Alipay or whatever transfer service a seller or buyer might use.)

The acquisition gives Ant Financial a massive international boost, and for the first time a significant profile in Europe where does have a modest presence, but it comes amid some stumbles for the company in its other attempts to expand internationally.

Notably, the company agreed to acquire Nasdaq-listed MoneyGram for $1.2 billion in 2017 after it won a bidding war for the global payment company. Ultimately, however, the deal was blocked by the U.S. government. Bruised by the episode, which set its plans back by a year, Ant went on to raise an enormous $14 billion funding round last summer during which time it presumably kicked off the search for a MoneyGram alternative.

While WorldFirst is based out of the UK, the company last year made a key move to expand its US operations when it was announced in August that it would acquire the retail money transfer business of San Francisco-based startup Wyre, which had built the network on blockchain technology but was selling it to focus on the other side of its business, providing currency exchange APIs to larger B2B customers.

It looked like all systems go for WorldFirst to move deeper in the US after that. But then, the company abruptly announced on February 20 that it planned to close the U.S-based business. The move may have been made to prevent a repeat of that scuppered MoneyGram acquisition. 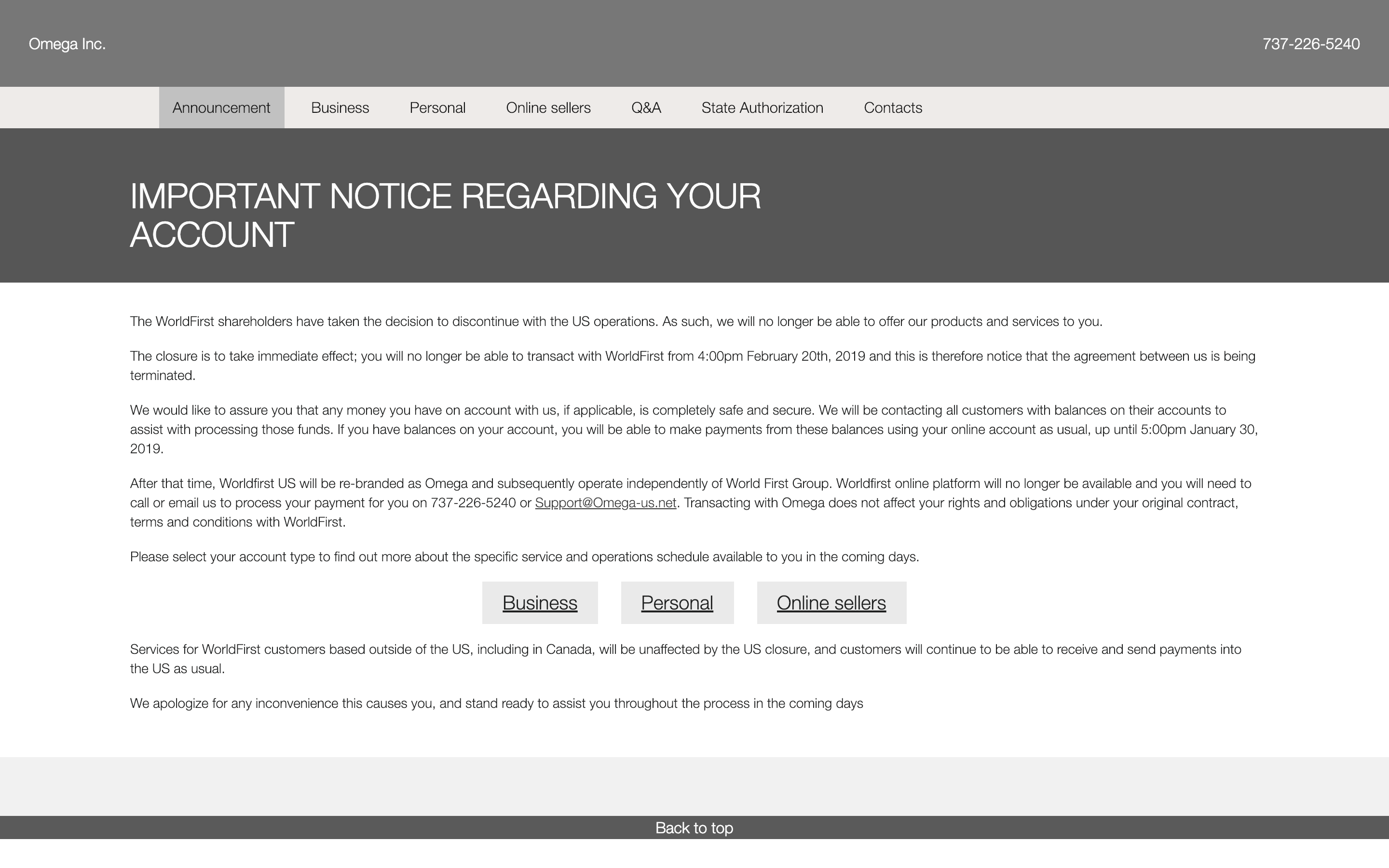 WorldFirst is closing its business in the U.S. in a move widely seen as a precursor to its acquisition by Ant Financial

Outside of the U.S. and China, Ant Financial has aggressively expanded its presence in Asia through a series of investment deals that have seen it put $200 million into Kakao Pay in Korea, and find similar deals in Southeast Asia. The overall strategy appears to be to replicate the success of Alipay in China, where it offers mobile payments and digital financial services that cover loans, banking and wealth management.

In a show of its global ambition, Alipay just this week announced a deal to bring its payment option to U.S. Walgreens stores. A previous partnership with point-of-sale company First Data added Alipay to four million retail partners Stateside, and the company has similar deals in Europe and parts of Asia.