I’ve been podcasting in various forms for about a dozen years now. Sometimes it has been within the corporate confines of the various publications I’ve worked for and sometimes it has just been for myself. That’s the beauty of podcasting — there’s no overhead.

It can be recorded on a terrible Skype line or meticulously crafted by an army of producers. You can do it for five listeners or five million. Do a five-episode miniseries or suddenly look at the calendar one day and realize you’ve been putting up an episode a week for five years.

My current podcast, RiYL, falls into the latter category. Episode 322 just posted this weekend. That’s a lifetime in podcast years, and I’m not exaggerating when I say there’s no way the show would have lasted this long had I not assembled the proper gear.

It’s true that doing the show has been an ongoing process of refining my setup, both in terms of recording hardware and the software workflow, but the core components have been in place for a while. A number of my more successful friends have invested thousands to build home studios that sound as professional as any NPR affiliate.

For me, however, the key has always been mobility. I’ve fine-tuned a podcasting rig that sounds good, but is small enough to slip into a laptop sleeve. Leave no trace, as the saying goes.

Always keep a podcasting rig you can fit in a laptop sleeve. pic.twitter.com/BAwbHAuzKG

The motivation dates back to the show’s humble beginnings (though, for the record, the first few episodes were done over Skype as I was still figuring things out). I realized pretty early on that getting touring artists and musicians to come to my place in Queens (with a few exceptions) was going to be a non-starter.

Piecing together a lightweight rig has given me the flexibility to meet people where they are, be it a hotel room, bar or their PR rep’s conference room. And now that I travel pretty regularly for work, it means I can easily slip the setup into a carry-on, so I can meet guests in their hometowns.

Here’s a photo of upcoming guest Hannibal Buress, recorded in my hotel room in Lagos, Nigeria. My setup is placed gingerly atop my overturned suitcase on a coffee table. He’s clearly impressed. 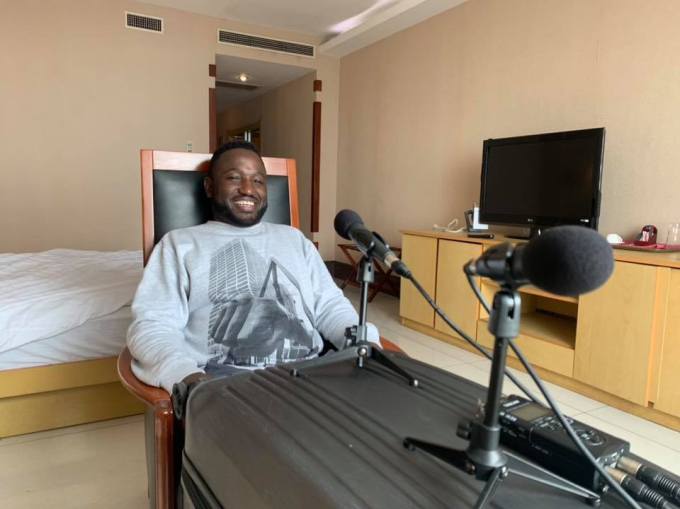 The other thing the setup has helped me realize is that people’s expectations for professionalism has shifted considerably in recent decades. My rig is small and simple, but various guests have commented over the years that they’re impressed. The last person who interviewed them had them speak into their iPhone.

At the very least, this is certainly better than that.

It’s not the end-all, be-all, by any stretch of the imagination. This is just what has worked for me. Over the years, I’ve had plenty of people — guests and otherwise — ask me what I use. Also, in the wake of last week’s Spotify acquisition of Anchor and Gimlet, podcasts are, once again, the hot newness. So now seemed like as good a time as any to get this all down on paper. 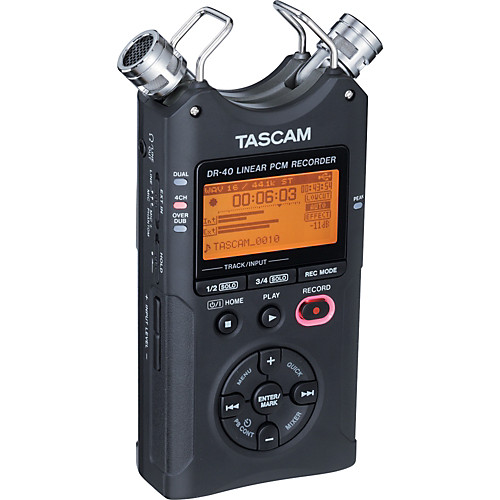 TASCAM DR-40 4-Track Portable Digital Recorder ($170): This was my first acquisition and the one piece of hardware I’ve held onto through the duration of the show (though for the record, I’ve purchased it twice after an unfortunate incident with a lost backpack).

Zoom and Roland also make solid multi-track recorders that will probably be interchangeable for most. The key is finding a system you like that sports dual XLR mic inputs that you can monitor on the fly. They pretty much all have built-in mics, but you’re not going to want to rely on room mics for a podcast. It sounds like crap and it’s a nightmare to edit if you’ve got more than one speaker. 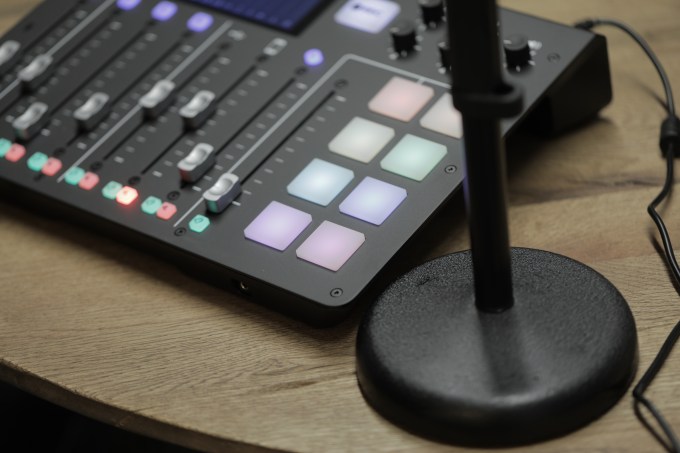 Recording works like a charm. The system records each mic to a left and right channel, which it saves as a WAV file on an SD card. Just make sure the mics are placed at a sufficient distance, so you don’t pick up too much cross talk.

Of course, here you’re limited to two mics. That’s been an issue at points when entire bands have wanted to join in on the fun. The aforementioned companies do make recorders with more inputs. Those are generally larger and a lot pricier, though.

Honorable mention here goes to the Rodecaster. The board is really great at what it does. We recorded an episode of TechCrunch Original Content on the thing, with it doing guest duties and producing in real time. The recent addition of multi-track recording makes this thing an absolute killer.

It has eight channels, including multiple mic inputs, triggerable sound pads and the ability to beam someone in via phone. If I was setting up a home studio on the cheap, I would shell out for one of these, no questions asked. That said, it’s just way too large for my current needs. 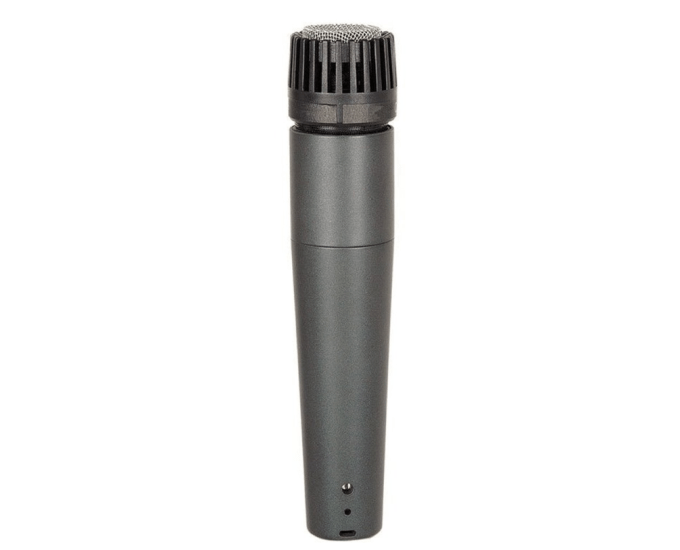 Weymic New Wm57 ($10): Okay, true story. Right after I bought the TASCAM, I invested in a pair of super-cheap mics. They sounded… OK, but the presentation was lacking. One afternoon, I went to Reggie Watts’ Brooklyn apartment to record an episode. I handed him a mic. He looked it over, moved it around in his hand a bit, then slyly unplugged it and reached into a drawer behind him, grabbed a mic and popped it on.

The guy knows from microphones.

My takeaway here is that presentation is important. Looks matter, as does weight. A microphone should have some heft to it. People’s expectations have lowered with regards to what an audio setup looks like, but you need good mics if pros are going to take you seriously.

I’ve since been through various mics, and lately I’ve settled on these things. For the record, they’re a wholesale knock-off of the Shure SM57 Cardioid Dynamic Microphone — the go-to microphone for podcasters. The SM57 is the thing I assume Marc Maron and Terry Gross would talk about if they had to share an Uber Pool to Silver Lake.

The Weymic looks nearly identical and sounds great for one-tenth the price. Don’t ask me how. And hey, I’m not exactly swimming in Casper ad revenue here. Also do yourself a favor and invest in a couple of foam windscreens to cut down on sibilance. You can get a bunch in a pack for cheap. 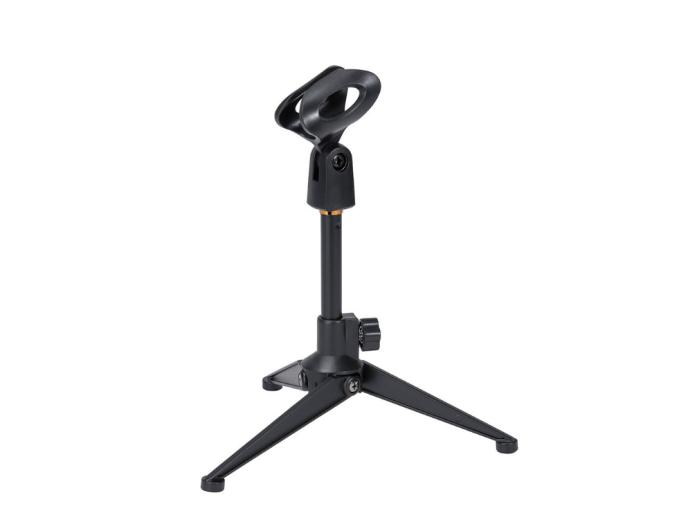 Universal Adjustable Desk Microphone Stand Portable Foldable Tripod (Two for $15): I’m embarrassed to admit how long it took me to add these to the repertoire. Guests jostle mics a lot during long interviews, and that stuff picks up. I’ve also had a number of older guests on the show, and asking them to hold a microphone for 45 minutes to an hour is just cruel.

These, picked up from Amazon, are super-cheap and fold up into nothing, making them perfect for my laptop-sleeve constraints. The only issues are: 1) They’re not great for super-tall guests. I recently had a member of the band Health on the show and ended up sticking the stand precariously atop a pile of several books; and 2) The screws loosen themselves like crazy for some reason, so I just purchased a pair of keychain screw drivers to keep them in check.

I pair all of that with a couple of six-foot XLR mic cables ($7 a piece for Amazon basics) and some velcro ties. Those fit nicely in the outside pocket of the laptop sleeve, along with backup batteries. 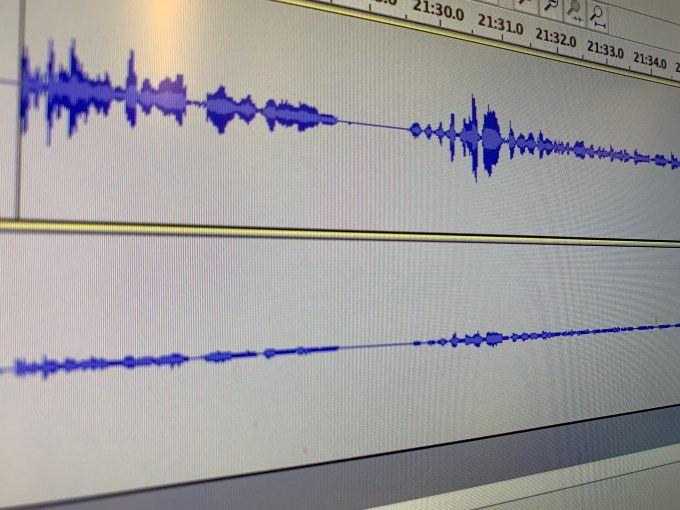 Audacity/Garage Band: Sometimes you just stick with the workflow you’ve got. I should probably upgrade to Adobe Audition (maybe this article will be what motivates me) one of these days, but I’ve been using Audacity for like 10 years at this point. It’s simple and it works fine for chopping up a show. That’s my biggest complaint with a number of the free apps like Anchor — they mostly suck when it comes to editing a show.

And editing is important. It’s true that another one of the wonderful things about podcasts is they can be as long or as short as you want, but everything can benefit from a little tightening up. I also spend a lot of time adjusting levels (often on the subway ride home). And make sure to record a little room tone to get rid of ambient noise in post. 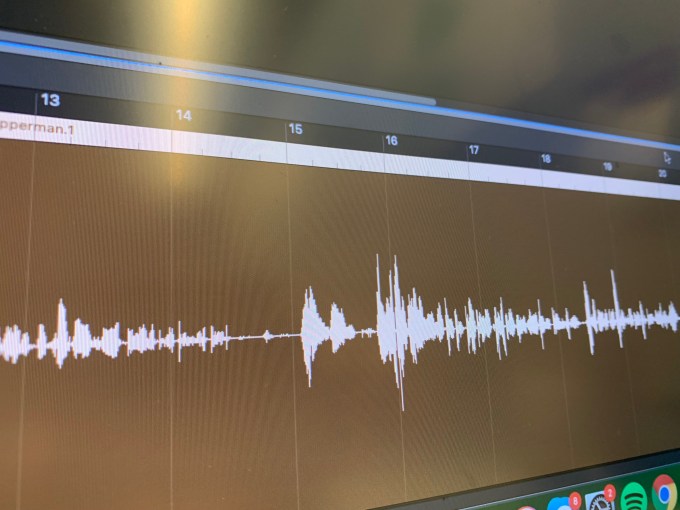 After the show is edited, I export it as a single track and import it into my show template in Garage Band. That’s where I add the music beds, outros and the like.

Podbean: A couple of friends are launching a podcast soon. They asked me who I use for hosting. Podbean is something I found early on. I’m not sure I’d recommend the service, but I’m 300+ episodes deep at this point. There are a lot of options out there, so shop around a bit. Anchor is compelling for novices, including its built-in ad-servicing (though I’m a little wary of how the Spotify acquisition will play out) and a lot of my friends swear by Libsyn for more popular shows. Heck, even SoundCloud has a decent option.

Everyone has an embedded player and the means with which to syndicate to iTunes, Google Play, Spotify, et al.

I’ve found Podbean to be a bit clunky and the service has experienced a handful of outages. That said, recent additions have streamlined the program, and they’ve added some pretty decent analytics to the backend, so it’s definitely headed in the right direction. Once uploaded, I embed that into a Tumblr post.

This week on RiYL, a frank discussion with @michaelfranti about the power of human connections and optimism in a difficult world. https://t.co/Q8Y6joNlCy #riylcast pic.twitter.com/PoVseiihWf

Headliner: I’ve tried a number of speech visualizers for promoting the show. I found Anchor’s clunky. Wavve’s was decent, but they start charging you after your first 30-second clip. I only just started using Headliner this week, and it’s terrific. Easy to use, highly customizable and, best of all, free.

The transcriptions are okay for a free service (you’re going to have to clean them up) and the online editing tools are great. I think I’m sticking with this one for a while.

Additional shout-outs to Google Drive. The first thing I do after transferring files from my desktop is back them up here. It’s the one place where I’ve got all my files and has helped quite a bit with scheduling episodes.

YouTube is another recent experiment for me. I’ve been syndicating the show to all of the usual places, as mentioned above, but it recently occurred to me that people use the video platform to listen to audio programs. I asked a bunch of folks on Facebook and found it to be surprisingly popular. This will become increasingly important as more people purchase screen-sporting assistants like Google Home Hub and the Amazon Show. It’s a new thing for me and I’ve only got a handful of subscribers at the moment, but I’ll let you know how that goes.

I do still find myself recording remotely from time to time. Auto podcaster extraordinaire Kirsten recently introduced me to Zencastr, which is great for this purpose, recording each caller remotely and backing up those files to a server. If I’m using Skype, I go with the old standby, Ecamm’s Call Recorder, to record locally. 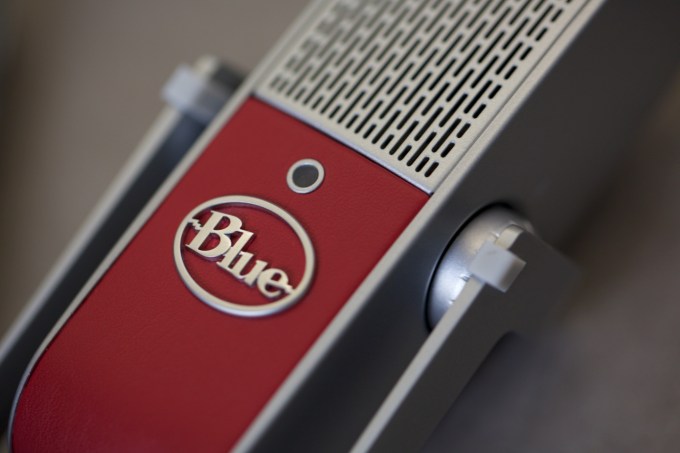 I’ve also become attached to Blue’s Raspberry USB mic for this purpose. It’s adorable and tiny, so you can stash it in a backpack for travel. It’s not the best-sounding mic, but it’s good for its size and it sounds a hell of a lot better than the company’s Yeti Nano. Rode’s got a company of models with optional windscreens I’ve been meaning to check out as well, but I’ve heard good things.

If you’re hip to any new tools you think I should check out, hit me up on Twitter at @bheater. I’m always looking for ways to step up my game.