Blue Raspberry brings to mind Slurpees as much as anything. The name of Blue Microphone’s latest offering is seeming an homage to its longstanding Blueberry condenser mic, but then, between the Snowball, the Spark, the Tiki and the Yeti, there’s seemingly no rhyme or reason to the microphone’s naming conventions.

What the company does have, however, is some real clout among podcasting hobbyist, since the first Snowball was release half a decade ago. The product line adapted the company’s audio expertise to a far cheaper plug-and-play form factor that was adopted almost immediately by users looking to dip their toes in the burgeoning world of podcasting with minimal cost and effort.

Since then, the USB line has been something of a flagship for the company, extending the Blue name beyond the padded walls of audio professionals. Accordingly, the company has capitalized on its successes with a dozen or so different products. Announced this morning, the Raspberry splits the different between the desktop Snowball and Tiki USB dongle – though at $199, it’s priced even more that the baseline Yeti, which could make it a pretty tough sell.

A blast from the past 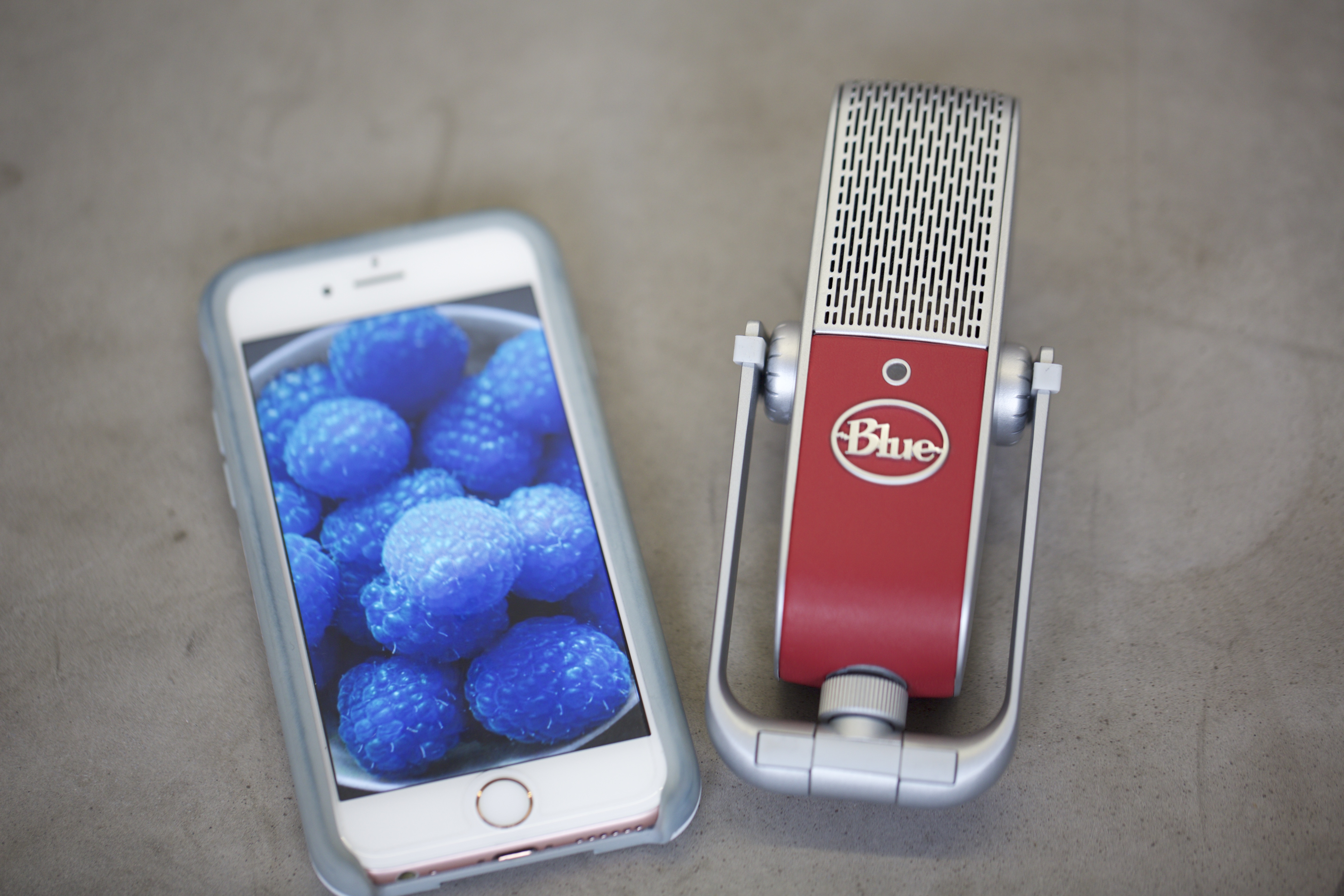 Blue knows how to make a nice looking product. As with its other offerings, the Raspberry has a sort of space age retro feel – the sort of vibe one pays into when picking up a Danelectro guitar or a Crosley record player. In fact, this latest model offers one of their most appealing designs yet, coupling brushed metal curves with a red leather face. It’s a sleek and angular take on vintage studio microphone design.

On either side of the mic are two large knobs – headphone volume on the left and mic volume on the right. Pressing in on the latter also serves to mute the microphone, turning the big green power button on the front a stoplight red. On the back is a headphone jack output and a microUSB slot that serves to both connect and power the device. 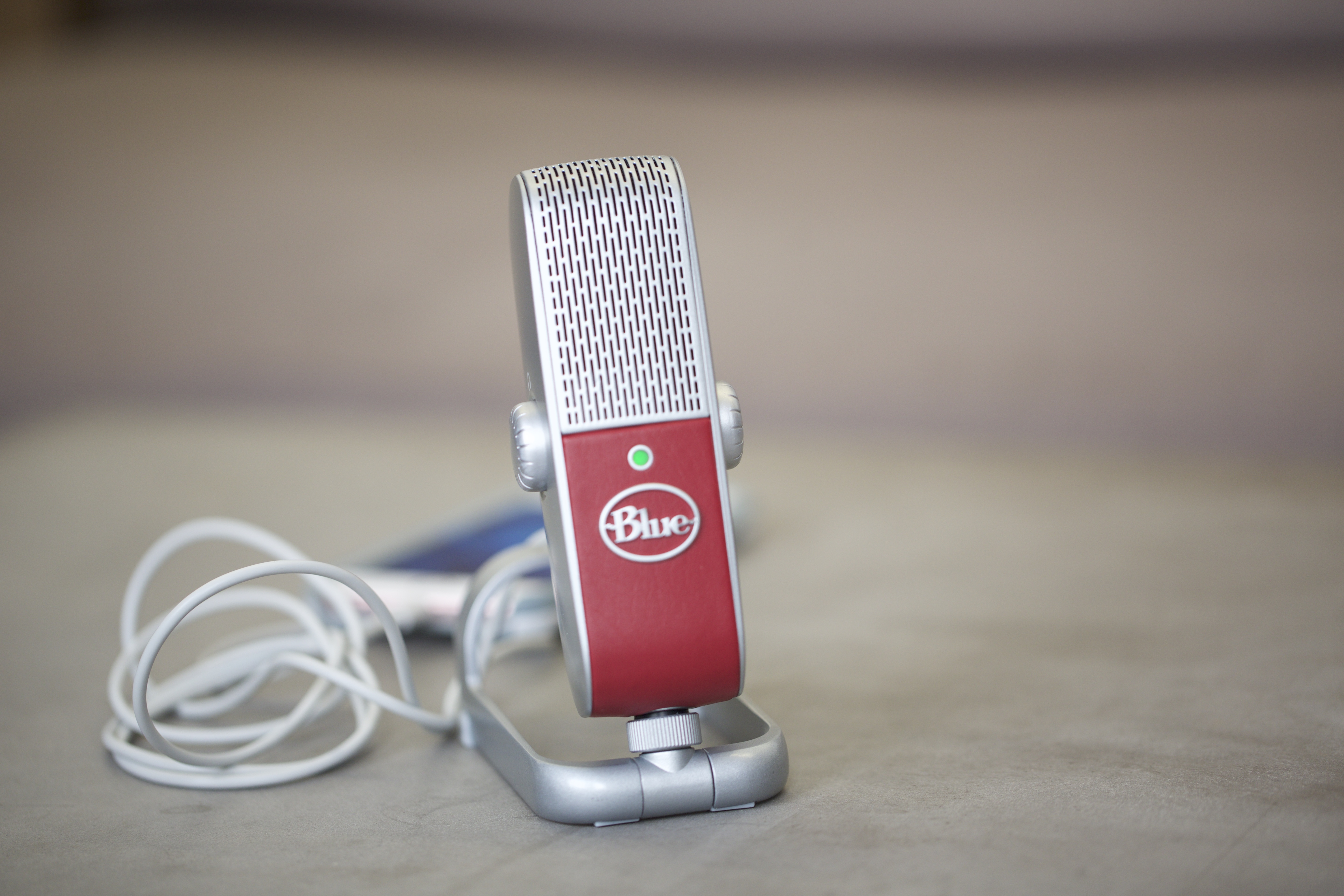 The skinny little mic sits is connected to a swiveling joint atop a metal base. It’s a solid combination that offers up a fair variety of different configurations, so you can adjust the height according to your set up – though getting it to stay put at its tallest height does require a bit of a balancing act, but once you’ve mastered that, it will stay put.

Folded up completely, the Raspberry has roughly the same dimensions of an iPhone (albeit several times thicker). It’s probably a bit thick to be carried around in a pocket, but it’s a great size to thrown in a backpack for on-the-go mobile record. It’s a nice size that splits the difference between portability and professionalism. You’re less likely to get sideways looks when you unfold a mini-microphone, rather than plugging a dongle directly into your phone. 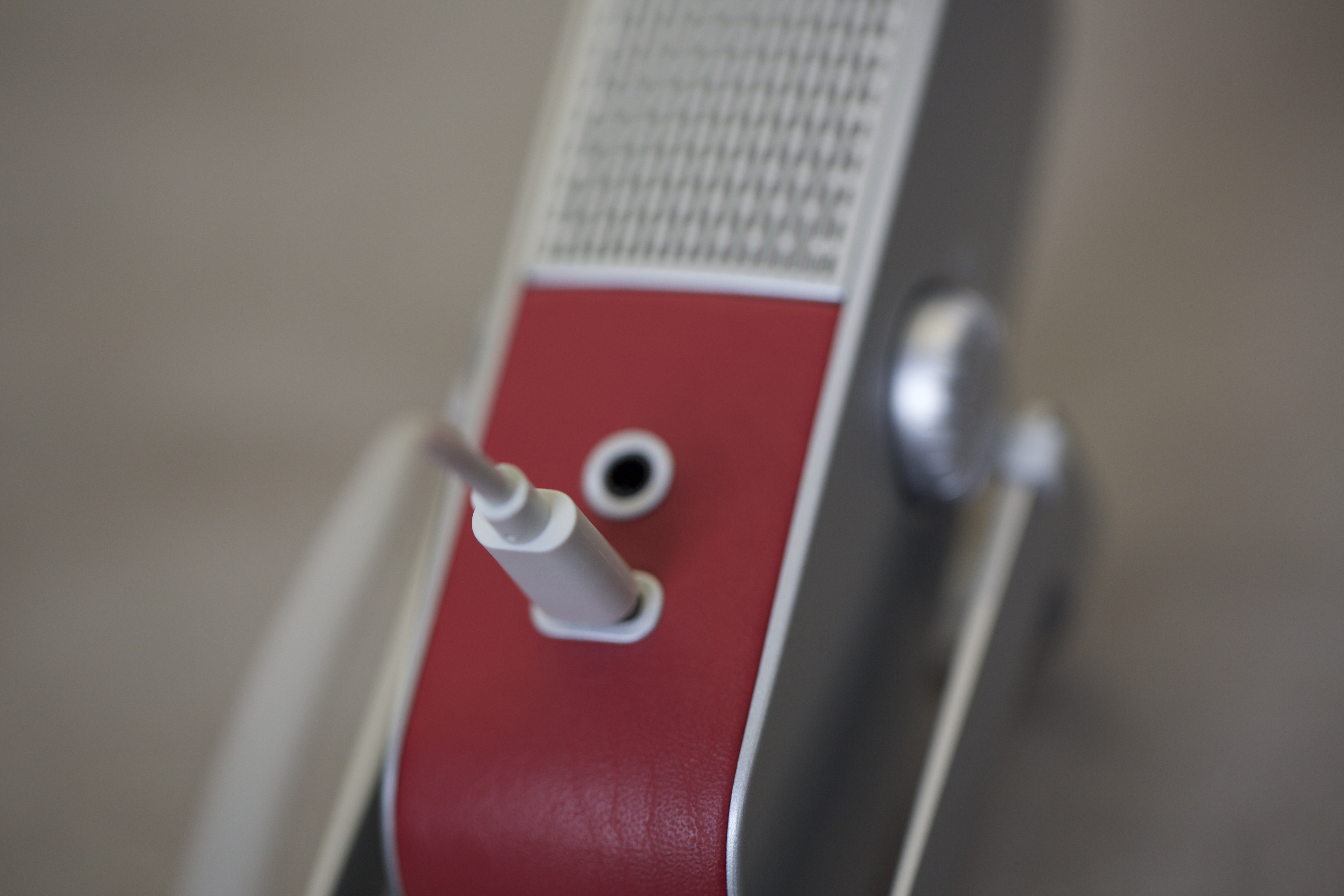 Size aside, ease of use is probably the Raspberry’s strongest selling point. The mic is plug and play in the truest sense. You can connect it to a computer with a standard microUSB cord, or use one of the two included cords to connect it to a phone. I grabbed the microUSB to Lightning cable, plugged it into the iPhone and was ready to go with third-party software.

Likewise, the device works with a computer with the same general ease as the rest of Blue’s products. Though, if you’re looking for something to use on a desktop, you’re better off sticking with one of the company’s existing lines. The Raspberry delivers solid sound for its size, but the Yeti offers a fuller, less tinny experience and also features a number of built-in settings, so users can adjust based on the room they’re in and the tone they want. 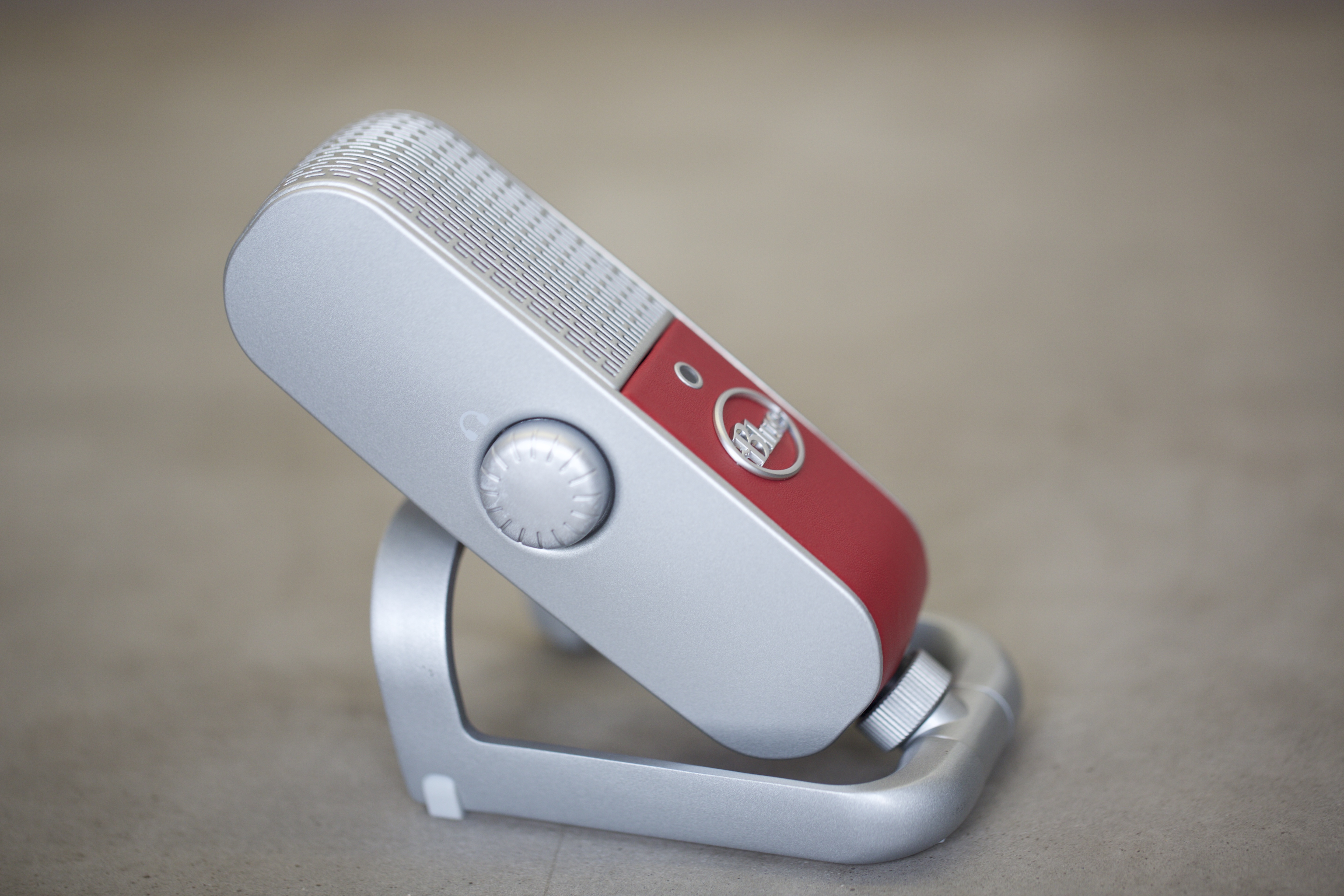 As is, the performance is somewhere between a headset and a Yeti. That means the sound quality will likely suffice for the majority of hobbyist podcasters, but depending on how things play out, they may well find themselves looking to upgrade somewhere down the road to up their podcasting game. 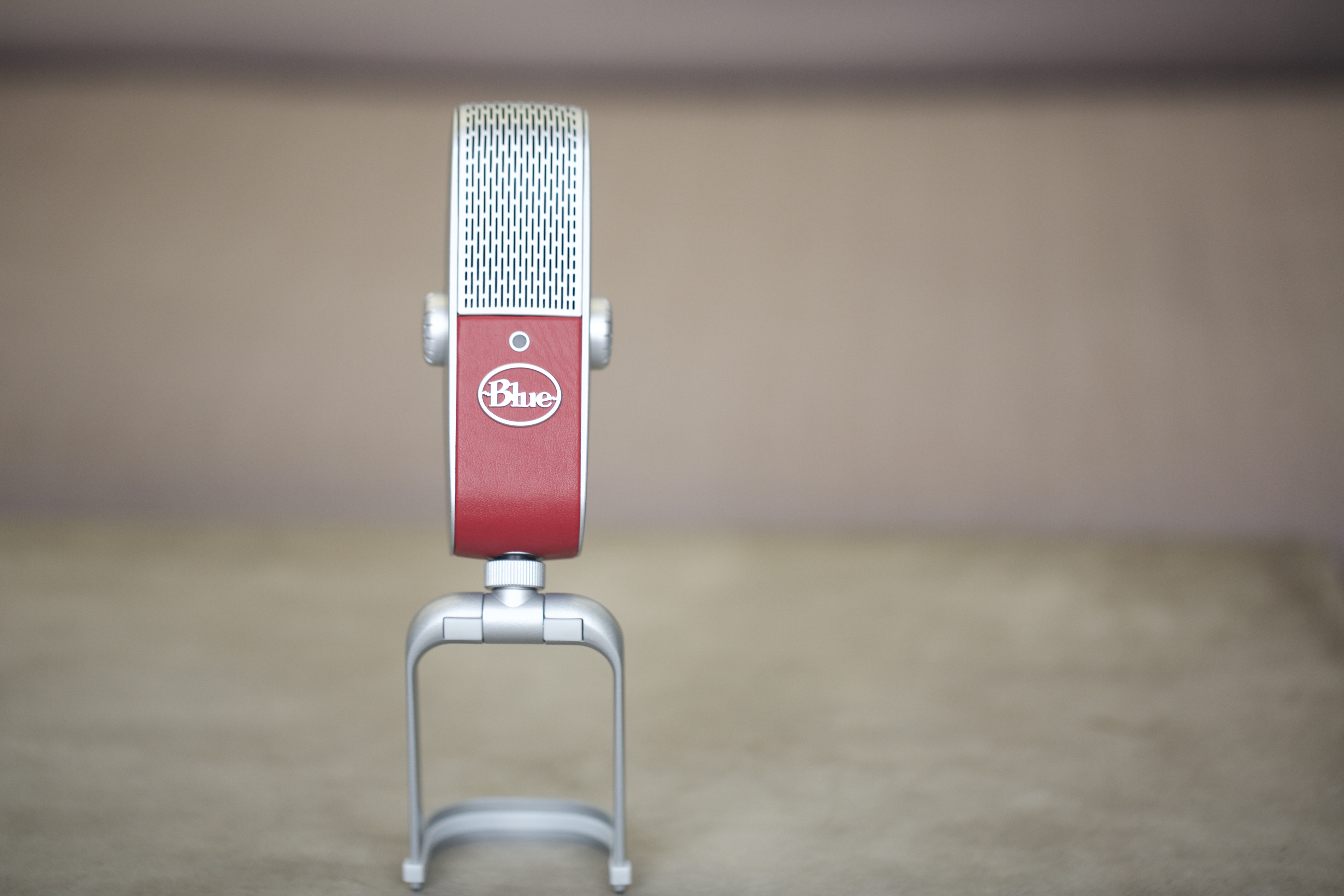 The Raspberry is an easy device to like. Its portable, well designed, easy to use and sounds pretty good. I’m not entirely sure that it fills a niche the company wasn’t already addressing with its various existing USB products, which cover a fair amount of case uses between them, but the product does offer a nice compromise between size and sound.

The $199 price tag, on the other hand, makes it a much tougher sell. Given the way these things tend to go, however, I’d advise waiting it out a bit to take advantage of the inevitable price drop. Once Blue hacks $50 or so off the asking price, the Raspberry becomes a much more compelling proposition for your podcaster on the go.