Last year, Match Group acquired a 51 percent stake in the relationship-focused dating app Hinge, in order to diversify its portfolio of dating apps led by Tinder. The company has now confirmed that it fully bought out Hinge in the past quarter, and today owns 100 percent of the app that has been gaining momentum both inside and outside of the U.S. following last year’s deal.

Match believes Hinge can offer an alternative to those who aren’t interested in using casual apps, like Tinder. As the company noted on its earnings call with investors this morning, half of all singles in the U.S. and Europe have never tried dating products. And of the 600 million internet-connected singles in the world, 400 million have never used dating apps.

That leaves room for an app like Hinge to grow, as it can attract a different type of user than Tinder and other Match-owned apps — like OkCupid or Plenty of Fish, for example — are able to reach.

As Match explained in November, it plans to double-down on marketing that focuses on Tinder’s more casual nature and use by young singles, while positioning Hinge as the alternative for those looking for serious relationships. The company said it would also increase its investment in Hinge going forward, in order to grow its user base.

Those moves appear to be working. According to Match Group CEO Mandy Ginsberg, Hinge downloads grew four times on a year-over-year basis in the fourth quarter of 2018, and grew by 10 times in the U.K. The app is particularly popular in New York and London, which are now its top two markets, the exec noted.

Match may also see Hinge as a means of better competing with dating app rival Bumble, which it has been unable to acquire and continues to battle in court over various disputes.

Bumble’s brand is focused on female empowerment with its “women go first” product feature, and takes a more heavy-handed approach to banning, ranging from its prohibition on photos with weapons to its stance on kicking out users who are disrespectful to others.

Match, in its earnings announcement, made a point of comparing Hinge to other dating apps, including Bumble.

“Hinge downloads are now two-and-a-half times more than the next largest app, and 40 percent of Bumble downloads,” said Ginsberg, referring to a chart (below) which positions Hinge next to competitors like Happn, The League, Coffee Meets Bagel and Bumble. 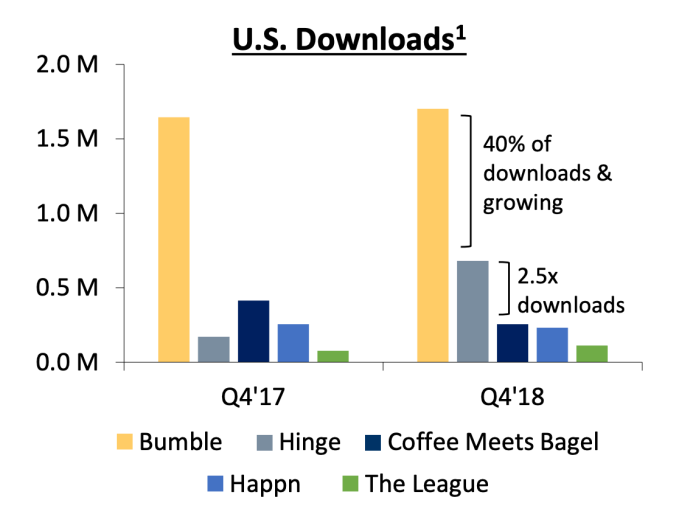 According to third-party data from Sensor Tower, Hinge to date has been downloaded 4.2 million times in the U.S., and 5.5 million times worldwide (including the U.S. and other markets). It generated $5.2 million in worldwide revenue in 2018, across both iOS and Google Play app stores, the firm says.

“We expect Hinge to continue to strengthen its position in this relationship-minded market,” she added. “We believe that Hinge can be a meaningful revenue contributor to match group beyond 2019, and we have confidence that it can carve out a solid position in the dating app landscape amongst relationship-minded millennials, and serve as a complementary role in our portfolio next to Tinder,” Ginsberg said.

Match has big plans for Hinge in 2019, saying that it will expand Hinge to international markets, double the size of its team and build new product features focused on helping people get off the app and going on dates.

Hinge today claims to be the fastest-growing dating app in the U.S., U.K., Canada and Australia, and is setting up a date every four seconds. Three out of four first dates on Hinge also lead to second dates, it says.

Hinge is now one of several dating apps owned by Match Group, which is best known for Tinder and its namesake, Match.com. But the company has been diversifying as of late, not only with Hinge, but also its newest addition, Ship, which was developed in partnership with media brand Betches. But Ship could be a miss if it doesn’t even out its demographics — currently the subscriber base is 80 percent female, Match says.