Google today announced that it is open sourcing ClusterFuzz, a scalable fuzzing tool that can run on clusters with more than 25,000 machines.

The company has long used the tool internally, and if you’ve paid particular attention to Google’s fuzzing efforts (and you have, right?), then this may all seem a bit familiar. That’s because Google launched the OSS-Fuzz service a couple of years ago and that service actually used ClusterFuzz. OSS-Fuzz was only available to open-source projects, though, while ClusterFuzz is now available for anyone to use.

The overall concept behind fuzzing is pretty straightforward: you basically throw lots of data (including random inputs) at your application and see how it reacts. Often, it’ll crash, but sometimes you’ll be able to find memory leaks and security flaws. Once you start anything at scale, though, it becomes more complicated and you’ll need tools like ClusterFuzz to manage that complexity. 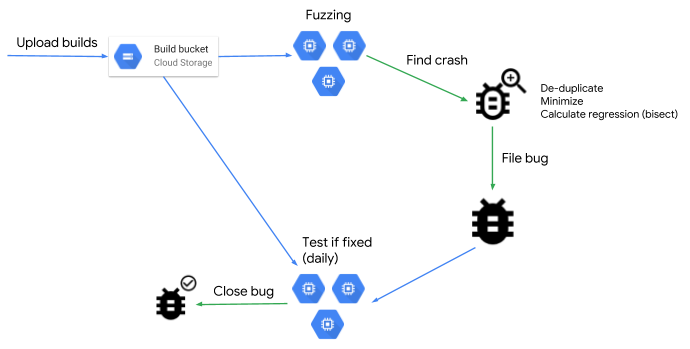 ClusterFuzz automates the fuzzing process all the way from bug detection to reporting — and then retesting the fix. The tool itself also uses open-source libraries like the libFuzzer fuzzing engine and the AFL fuzzer to power some of the core fuzzing features that generate the test cases for the tool.

Google says it has used the tool to find more than 16,000 bugs in Chrome and 11,000 bugs in more than  160 open-source projects that used OSS-Fuzz. Since so much of the software testing and deployment toolchain is now generally automated, it’s no surprise that fuzzing is also becoming a hot topic these days (I’ve seen references to “continuous fuzzing” pop up quite a bit recently).