Blue Apron is introducing a lower-cost version of its meal kits, initially only for Jet.com shoppers in the greater New York City metro area. The new recipe kits, called “Knick Knacks,” still require refrigeration, but require customers to supply their own protein and produce to complete the meal. But by dropping the two most expensive ingredients from the meal, the company has brought the price down to $7.99, compared with prices that ranged from $17 to $23 for the meal kits that launched on Jet last fall.

As you may recall, Walmart subsidiary Jet announced in October that it would begin selling Blue Apron’s meal kits to its City Grocery customers. Jet had relaunched its site the month prior with a new focus on serving the needs of urban shoppers, which included same-day delivery of groceries. The revamped site is now localized to where shoppers live, with images and messaging specific to the customer’s city.

The localization efforts would begin in New York, Jet said at the time, before rolling out to other major U.S. metros like Boston, Philadelphia and D.C.

Jet then became the first online retailer to sell Blue Apron’s meal kits — giving the meal kit company a needed boost at a time when its subscriber base had been in decline.

Though Blue Apron’s name had become synonymous with meal kits, they were beset with challenges on all sides — including then fast-growing competitors like HelloFresh, an inability to reduce unit costs, customer base declines and the challenges in converting newcomers to subscribers in the face of competition from ready-to-eat meals, delivered on demand and available at most markets today for pickup.

With Knick Knacks, Blue Apron is tackling some of the issues with its meal kits — namely, the high cost and the need to subscribe to receive them.

At this point, the future of Blue Apron is very much tied to how well its strategic partnerships, like this with Jet and the other with WW (formerly, Weight Watchers), eventually play out. 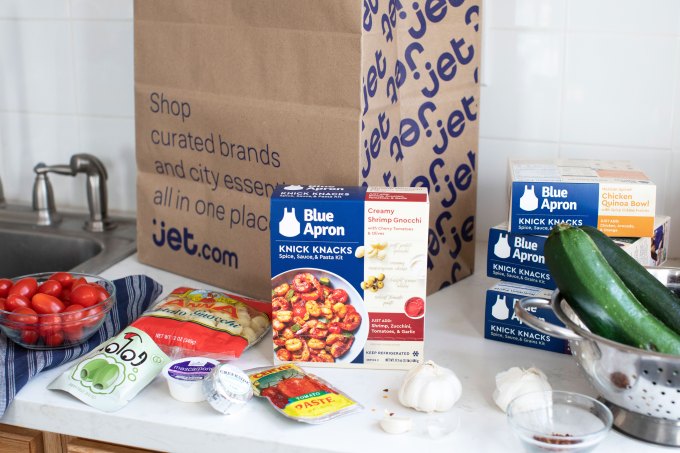 The new kits themselves will include a combination of pre-portioned spices, sauces, grains and dairy ingredients from Blue Apron’s premium suppliers, such as crème fraîche from Vermont Creamery, furikake from Mara Seaweed and preserved lemon puree from NY Shuk, as well as Blue Apron’s own proprietary products, such as its line of custom spice blends, the company says.

The debut collection includes the following:

The kits are available in New York’s metro area only for the time being for both same-day and next-day delivery. The company declined to say when they’d hit other markets, or if Blue Apron would sell the kits elsewhere, like in Jet parent Walmart’s stores.