The technology sector awards women and same-sex couples the most comprehensive fertility benefit packages, according to a survey by FertilityIQ, an online platform for fertility patients to review doctors and research treatments.

The company asked 30,000 in vitro fertilization (IVF) patients across industries about their employer’s — or their spouse’s employer’s — 2019 fertility treatment policy, and allocated points based on their support for IVF procedures and egg freezing, among other services.

“I think a lot of people see the tech sector as being unenlightened when it comes to family values, but it’s still the sector that makes the fertility benefits the most widely acceptable,” Anderson, a former consumer internet investor at Sequoia Capital, told TechCrunch. 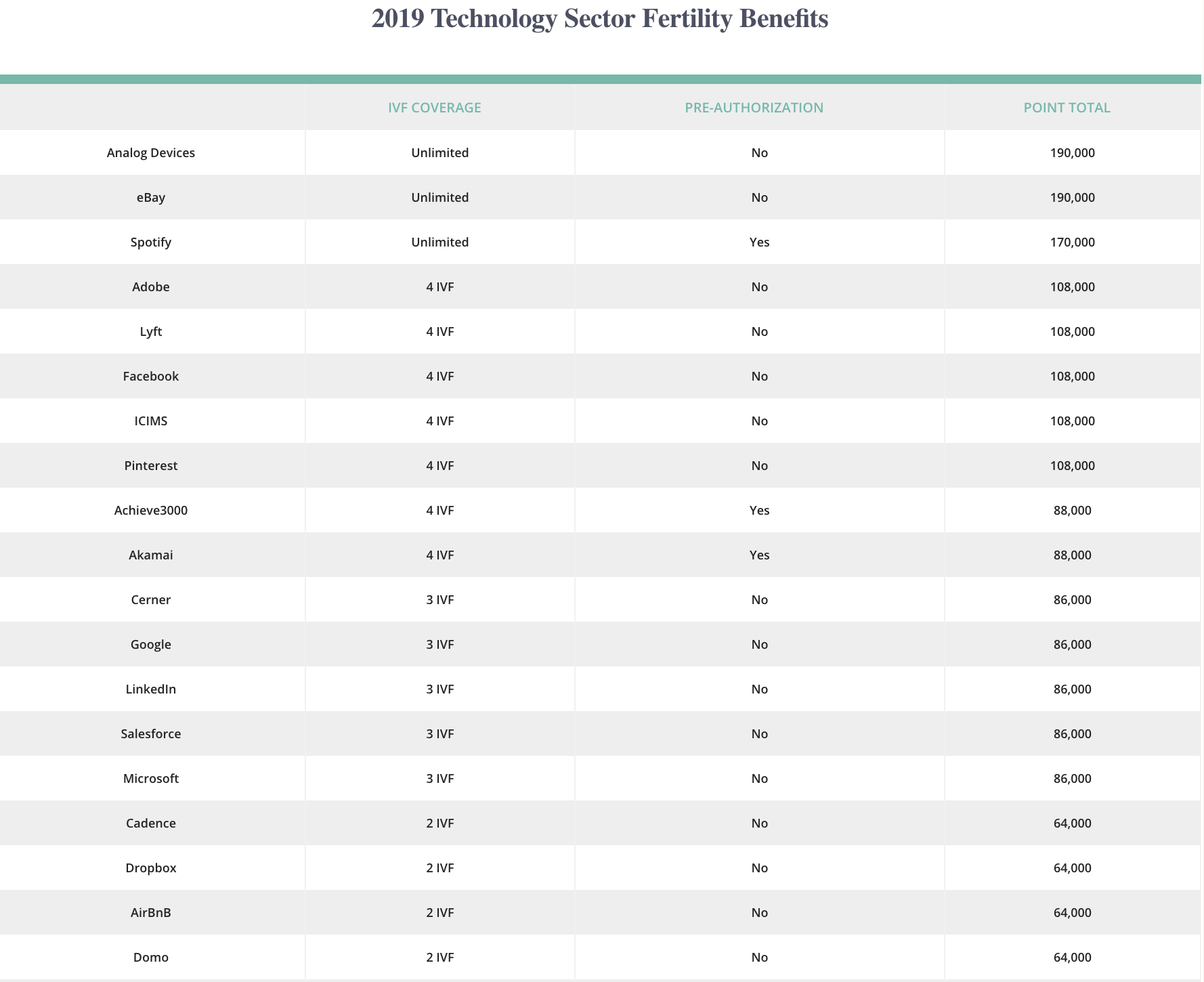 Despite an initial outpouring of skepticism, Facebook and Apple became leaders in the fertility benefit category when they began paying for their female employees to freeze their eggs in 2014. Since then, smaller firms have opted to beef up those benefits to stay competitive with their much larger and richer counterparts.

“The Lyfts, the Airbnbs and the Ubers of the world, who clearly need to compete with those companies for talent, have effectively matched those companies dollar-for-dollar despite a much smaller war-chest,” Anderson said. “These companies that are worth 1/1000th of these bigger companies are effectively going toe-to-toe to offer whatever women need.”

Anderson and his wife, FertilityIQ co-founder Deborah Anderson (pictured), noticed improved benefits in 2018 from companies implicated by the #MeToo movement, such as Vice Media, Under Armour and Uber.

“Silicon Valley is notorious for talent moving around on you but it’s probably not coincidental that some of the companies that were in the spotlight in the #MeToo movement have added really generous benefits,” Deborah Anderson told TechCrunch.

Uber, for example, now pays for its employees to complete two IVF cycles.

One in seven Americans struggle with infertility, and the rate of IVF procedures only continues to increase, with the latest data indicating a 15 percent year-over-year growth rate. IVF costs roughly $22,000 per cycle, per FertilityIQ’s survey, a cost which has similarly increased 15 percent since 2015.

That’s a whole lot of cash for a fertility patient to dole out. If companies foot the bill, they’ll have a better shot at retaining talent.

“Best we can tell, there is no question that employees that get this benefit and use it are more loyal and more likely to stick around,” Jake Anderson said. “The company that helps you build your family is the company that you remain committed to.”