Earlier this month, Roku announced it would soon begin selling subscriptions to premium video services directly from its own TV and movies hub, The Roku Channel. Today, those subscriptions are going live, allowing Roku users to sign up for channels like EPIX, Showtime, STARZ and others, then stream them without needing to install the channel’s own app on their Roku device.

Instead, all the content from the add-ons will be found in The Roku Channel section itself, alongside the other free and ad-supported TV shows, movies, news, sports and entertainment programming already offered. However, the premium channels will have their own area inside The Roku Channel, including a spot on the homepage, as well as their own dedicated tabs, the company said.

In time, Roku hopes to leverage the data from users’ unique blend of subscriptions to better personalize its recommendations.

A number of companies today offer the ability to watch premium programming through add-on subscriptions, but fewer allow you to do so à la carte — that is, most require you to subscribe to a core TV package first before adding extras. Amazon’s Prime Video Channels is probably the best known of the à la carte providers, though Sling TV rolled out a selection of premium à la carte channels last year.

Roku doesn’t plan to offer its own “skinny bundle” base package of streaming TV content at this time, the company recently told TechCrunch. 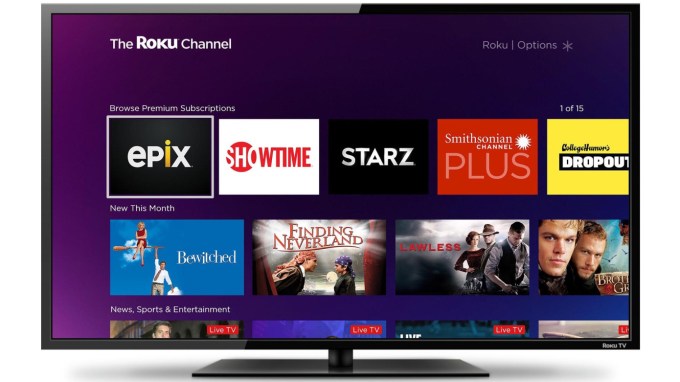 “I think where we are today is really focused on these à la carte subscriptions,” said Roku’s vice president of Programming, Rob Holmes. “Ultimately, from a user standpoint, there’s a lot of value in being able to pick and choose exactly what you want to sign up for — without having to sign up for one of these base packages to start with. That’s how we think about it today.”

Once subscribed to one of Roku’s premium selections, customers will only be able to watch the content through The Roku Channel itself. In addition to the revenue split on these add-ons, this benefits Roku because it puts attractive premium content right next to Roku’s ad-supported fare of some 10,000+ free movies and TV episodes. When customers are in search of something to watch next, it will be easy for them to just browse within the section they’re already in.

Plus, Roku says add-ons subscribers won’t even be able to use the premium networks’ own apps at launch, which keeps them further isolated in Roku’s own universe.

In order for customers to watch the premium content outside of Roku devices, like Roku TVs or media players, they’ll need to install the free Roku mobile app or watch on the web. The updated version of the iOS app is arriving today, and the Android update will be available in mid-February, the company says.

Notably missing from the lineup is HBO, which offers its own over-the-top streaming service, HBO NOW, and has deals with a number of à la carte and streaming TV providers.

Roku says the Premium Subscriptions feature will become available on select Roku devices in the U.S. today. They offer a 30-day trial period if you sign up before March 31, 2019, and are paid for using the payment info you have on file with Roku’s own billing system.

All supported devices should receive the update in the coming weeks, starting with Roku players and then Roku TVs. To see if your device has been updated, look for a new row called “Browse Premium Subscriptions” below the Featured row in The Roku Channel.